She lamented being remembered for tin-eared racial remarks about Obama, but maybe God wasn't finished with her yet 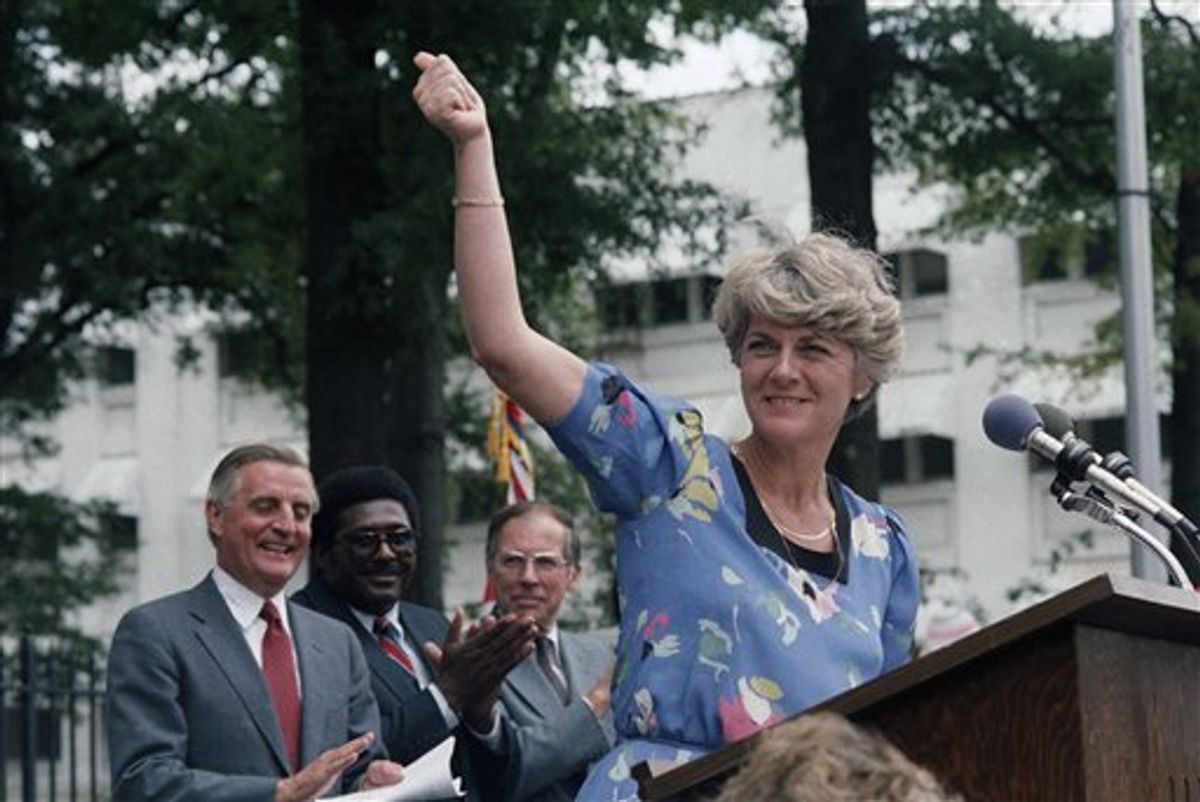 FILE - In this Wednesday, Aug. 1, 1984 file picture, Democratic Vice Presidential candidate Geraldine Ferraro gives the thumbs-up sign to a crowd of supporters in downtown Jackson, Miss. as Walter Mondale and Ferraro kicked off their 1984 campaign in this Southern city. Behind Ferraro are Mondale, state Rep. Robert Clark and former Gov. William Winter. The first woman to run for U.S. vice president on a major party ticket has died. Geraldine Ferraro was 75. A family friend said Ferraro, who was diagnosed with blood cancer in 1998, died Saturday, March 26, 2011 at Massachusetts General Hospital. (AP Photo/Ron Frehm, File) (AP)
--

Geraldine Ferraro, who died Saturday at 75, made history as the first woman on a national presidential ticket when she ran as Walter Mondale's vice-presidential nominee in 1984. The San Francisco convention where she was nominated was my first and remains one of my favorite political memories. She deserves better than to be remembered mostly for her pained and divisive comments about Barack Obama during the 2008 Democratic primary, but in some way, they defined her, good and bad. She was a staunch Hillary Clinton supporter, and as Clinton stumbled, Ferraro expressed her frustration this way: "If Obama was a white man, he would not be in this position. And if he was a woman of color, he would not be in this position. He happens to be very lucky to be who he is."

With that remark (and a few brash follow-ups), Ferraro risked sweeping away her status as a herald of groundbreaking social change, to become a symbol of the opposite: a reactionary unable to keep up with the times and celebrate our first black president. Sadly, she told my colleague Rebecca Traister in 2009 that the controversy was something "I probably will go to my grave with."

It wasn't fair, but maybe it was fitting. My personal introduction to Ferraro came at the 1984 Democratic convention, when a pre-convention interview with then California Assembly Rep. Maxine Waters got me a scoop, of sorts: Black female Democrats were angry that only white women seemed to be on Mondale's short list for vice president, and they were threatening to disrupt the convention to get attention. It was true; there was serious talk about Ferraro, as well as then-San Francisco Mayor (now senator) Dianne Feinstein and Colorado Rep. Pat Schroeder, but only a mere courtesy nod to Barbara Jordan, and not even that for Shirley Chisholm, who'd run for president in 1972. All the excitement of having a woman vice president on the 1984 ticket threatened to backfire on the Democrats: a party that was trying to atone for 150 years of politically excluding blacks and women in just 20 years (the  controversy over seating the black Mississippi Freedom Democrats at the 1964 convention was the first painful clash) still couldn't seem to get it right. The other party, of course, didn't even try.

With only six years in Congress, Ferraro wasn't an obvious choice for Mondale, but in fact, being a so-called white ethnic probably helped her as much as being a woman. She was picked at least partly to try to woo back the Italian, Irish and even Jewish voters that had become "Reagan Democrats" over the last decade. She ran for Congress in 1978 representing  the fictional Archie Bunker's district in Queens, that neighborhood nationally known for its bungalows and (to liberals) its backward views about race and the rapidly changing times, with the slogan, "Finally, a tough Democrat." She was also a tough, lifelong feminist who'd faced up to family and community to have a career. An uncle questioned why she needed college: "Why bother? She's pretty. She's a girl. She'll get married." When she applied to Fordham Law School, an admissions officer told her, "I hope you're serious, Gerry. You're taking a man's place, you know." She continued teaching second grade while attending law school at night, and went to work in the district attorney's office, pioneering the "special victims' bureau" that was a progressive, feminist advance at the time. Elected to Congress, she was no radical, but she supported public funding for abortion, drawing the ire of her Catholic Church, and took the lead on issues of pay and pension equity for women.

In the end, at the 1984 convention, there was no black female walkout: Maxine Waters held a polite press conference, and the party went on as planned. It was remembered for its stunning speeches: by New York Gov. Mario Cuomo, who like Ferraro was the son of Italian immigrants and, fittingly, got his political start mediating a tough racial conflict over housing in Queens; by the Rev. Jesse Jackson, who'd stumbled into his own racial drama by referring to New York as "Hymietown" early in his historic campaign, and apologized for it with the memorable line, "God isn't finished with me yet"; and by Ferraro herself, who brought delegates to tears when she told them, "The daughter of an immigrant from Italy has been chosen to run for vice president in the new land my father came to love."

But the campaign foundered on questions about Ferraro's real-estate developer husband's business, and his refusal to release his tax returns, which provoked another unfortunate quip: "You people married to Italian men, you know what it's like." (The campaign's best-remembered zinger came from mean-girl heiress Barbara Bush, who referred to Ferraro as "that four-million-dollar -- I can’t say it, but it rhymes with 'rich'.") The Mondale-Ferraro ticket lost badly to Reagan-Bush, with pollsters finding that in the end Ferraro contributed only a tiny bump to Mondale's female support. She twice ran for the Democratic Senate nomination in New York unsuccessfully, co-hosted CNN's "Crossfire" with Pat Buchanan, served as President Clinton's delegate to the U.N. Commission on Human Rights, and then set up shop as a management consultant focusing on advancing women. In 1998, she was diagnosed with the multiple myeloma that would ultimately kill her, but not without a trademark Ferraro fight.

Then, of course, she raced back into the spotlight with her fiery, ill-chosen words about Obama in 2008. Her inability to back down from a battle, which served her well as a woman in a tough ethnic neighborhood and in what was then a man's career, wasn't terribly helpful to her in the Obama mess. After the Clinton campaign distanced itself from her remarks, and Ferraro resigned from its finance committee, she doubled down on her claim that being black was an advantage for Obama and added, "I will not be discriminated against because I'm white. If they think they're going to shut up Geraldine Ferraro with that kind of stuff, they don't know me." Insisting she was being "discriminated against because I'm white" echoed white ethnic cries of "reverse discrimination" and sealed Ferraro's fate for many people -- she was a throwback white ethnic racist, a true product of Archie Bunker's neighborhood.

In his historic speech on race, Obama himself compared her to his controversial pastor, Rev. Jeremiah Wright, who was under fire for various anti-white statements, saying: "We can dismiss Reverend Wright as a crank or a demagogue, just as some have dismissed Geraldine Ferraro, in the aftermath of her recent statements, as harboring some deep-seated racial bias." He also said it would be wrong to "pounce on some gaffe by a Hillary supporter as evidence that she's playing the race card," but Ferraro was furious again, telling reporters, "To equate what I said with what this racist bigot has said from the pulpit is unbelievable."

It was hard to watch: Every time I thought about trying to defend Ferraro, who had so inspired me in 1984, she would say something indefensible.

In her 2009 interview with Traister for "Big Girls Don't Cry," she softened -- a little. "I got tied in by the Obama campaign on being racist, which I probably will go to my grave with and will never get over," she said, with sad prescience. "And I wasn't, obviously. What I said was not racist. If Hillary had drawn black women the way she drew other women, she would have won. Black women had two choices, race or gender. They went with race. As a mother, if I were a black woman, would I rather have my kids see a black get elected president of the United States? I would, quite frankly. I didn't think there was anything wrong with that. So when this [reporter] said to me, 'What do you think is going on, I said, 'It's black voters.'" She went on: "So when I heard this stupid-assed comment by [David Axelrod] who knew me, because I had supported [African American state controller] Carl McCall when he ran for governor ... to call me a racist ... I was like a lunatic."

As I noted last year when I reviewed David Remnick's great Obama bio, "The Bridge," while Ferraro was pilloried for suggesting Obama's race was a political advantage,  inside his campaign, some advisors believed the same thing. Mona Sutphen told Remnick many in the campaign also thought race was helping Obama more than it was hurting. "He is the embodiment of American diversity. In the end, that played really well for him," Sutphen explained. Remnick observed that where before the election, campaign pollsters feared a "Bradley effect" -- when whites tell pollsters they'll vote for the black candidate, but don't -- but afterward they discussed a "Palmer effect" or a "Huxtable effect" – the possibility that popular black TV characters like "24's" David Palmer and the whole "Cosby Show" made Obama's race less a disadvantage than an asset for many voters. That's just a long-winded, ruminative set of ways to suggest something like what Ferraro claimed. But putting it in her white ethnic Queens vernacular – "He happens to be very lucky to be where he is" -- gave it the tone of white grievance that made it objectionable. She was right; she sounded "like a lunatic."

And yet, as the product of working-class white ethnic Queens, where people deserted the Democrats in droves during the 1960s and '70s, she deserves credit for hanging on, for sticking with her party, and maybe even for surfacing subterranean currents of white resentment that most people are too polite -- or chicken -- to talk about. Race played a role in Obama's rapid rise, gender played a role in Ferraro's -- and her status as the rare working-class white ethnic who stayed loyal to the party that brought white ethnics into the middle-class mainstream contributed to Ferraro's rise as well. Too many people from Ferraro's background -- and from mine, for that matter -- abandoned the party when it took on the long-delayed task of trying to offer the same advancement to African-Americans. She stayed, and fought, and gave us all a chance to have one of those unpleasant "national conversations about race" we say we want and then recoil from. But diversity means people are going to have racial resentments and express them badly. As Jesse Jackson might put it, God wasn't finished with her yet, and She gave Ferraro one last role the Democrat might not have chosen for herself.