They're cheap, they're tasty, they are actually good for the environment, and they're infinitely variable 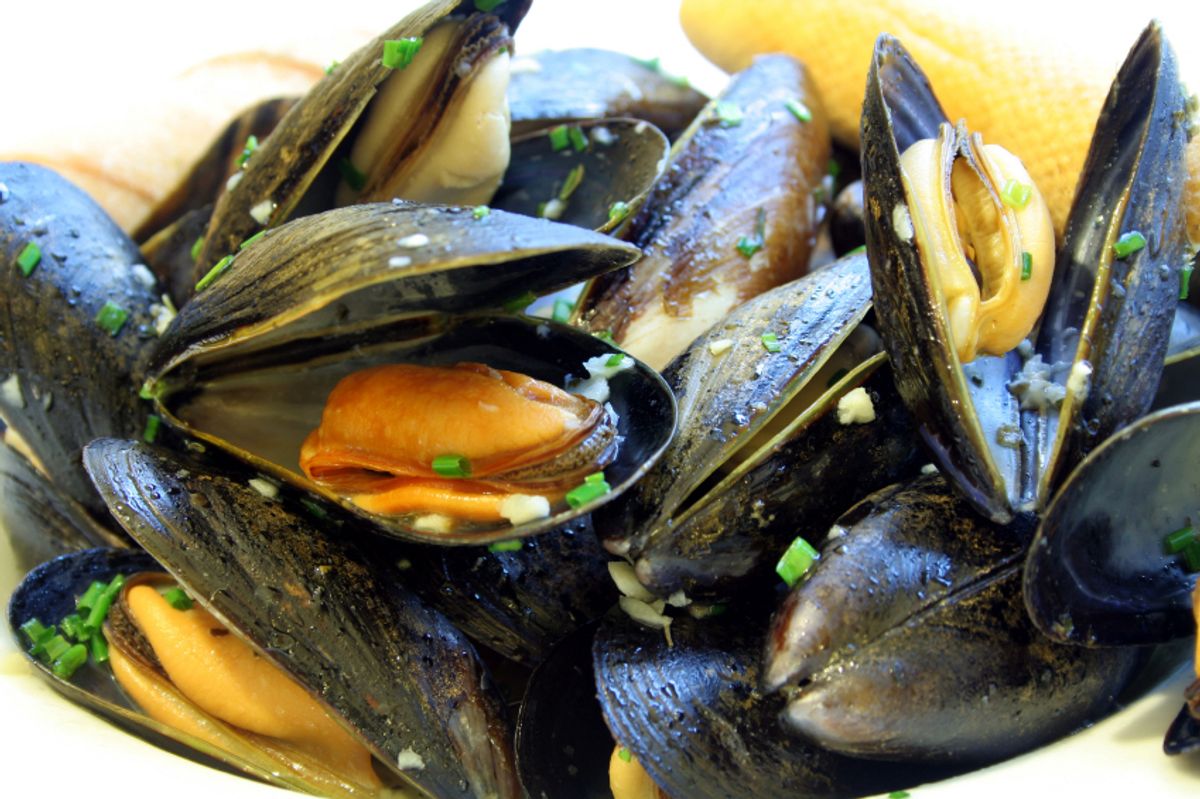 Sometimes, this is the kind of chatter you hear in a coffee shop in Fancy Brooklyn:

Man 1: "Well, how are we going to drive home the point that sustainable seafood is good? I think I should have, like, five to seven minutes to talk about it before we serve."

Man 2: "You're going to have to do all the talking while I cook. I have to focus on the food while I cook. Don't let people bother me."

Woman: "I think mussels. We have to do mussels. They're responsibly farmed, and they carry around their own sauce. They're perfect."

Man 1: "OK, but will we serve wine too? Or is just the lecture and the food enough?"

Aren't you sad you didn't get an invitation to the World's Most Sanctimonious Dinner Party? I am. I want to know what gets served for dessert at a soiree like this.

But my Fancy Brooklyner self-hatred aside, the lady had it right, for sure -- mussels are the jam. They taste great, are cheap, are ridiculously easy to cook, still pack some heat on the impress-the-guests scale, are seriously versatile and are, yes, sustainable. Calling seafood "sustainable" is usually tricky business because there are so many variables, but with mussels, you'll almost always get responsibly farmed shellfish that actually clean the water they're grown in. (They're a "best choice" on the well-respected Monterey Bay Aquarium Seafood Watch list.)

For too long relegated to "mixed-seafood pasta" jumbles or clichéd steams with white wine and herbs, it's time for mussels to get shown a little love. They can seem intimidating for home cooks, but really, I can't think of anything easier to prepare. And I love how sitting there with a big pot of them, slurping them out of the shell, soaking up the broth with bread, turns dinner into an event of conversation and juice-slicked hands.

How to clean mussels

Most mussels come pretty clean, actually, and there's pretty much never a problem with grit or sand, as you might have with clams. If there's a beard coming out of one -- you'll know it when you see it -- just give it a yank to pull it off. Some chefs want you to scrub them afterwards with a stiff brush or pad, but I never do. Your call.

How to store mussels

You don't want to hang on to them for too terribly long, more than a couple days, but they're fine in the fridge. Especially if you keep them in a bowl lined and topped with a moistened towel or paper towel. Whatever you do, don't keep them in water; fresh water will kill them.

How to cook mussels

Get them hot. They will open. They are cooked.

How to cook delicious mussels

OK, this is the fun part. Mussels have a flavor that's unmistakably oceanic -- salty, briny, minerally. They're not as saline or meaty as clams, not as clear and ringing as oysters, but they're a little earthier, a little down-and-dirtier. And they pair beautifully with anything you can think of that would do well with that salty, earthy bass note.

Earlier, I knocked on the combination of mussels with garlic and shallots, white wine, herbs and butter, but there's a lot to be learned in the basics. You have garlic and shallots (and usually butter or olive oil) as the aromatic base; an acidic liquid to help the steaming and to lighten the flavor; a bunch of fresh herbs towards the end of cooking to add a nice top note, and a finishing stir-in of butter to enrich the broth.

Using this framework, you can start improvising your way to limitless combinations. Basically, if you can imagine a bunch of flavors tasting good together, they will probably be good with mussels. Like a version with leeks or onions (aromatics), bacon (just because) and dark beer (liquid), and finished with a stir-in of crushed or ground nuts for more richness. (And maybe a final splash of malt vinegar or something if it wants a little brightness.)

The handsome chef Barton Seaver (who once chipped the hell out of my cleaver when I was in culinary school with him, and no, that's not a euphemism) has a new, excellently named book, "For Cod and Country," and it's got a bunch of fantastic mussel pairings: mustard in the classic white wine version, with scallions instead of herbs. Shallots, roasted until soft and caramelized, with red wine, finished with butter and rosemary. Roasted garlic and IPA or another strong beer, also finished with butter. A fistful of spices, finished with chorizo. (That one's called Mussels Saint-Ex, and it's probably worth buying the book for.)

This isn't a recipe so much as a basic method for steaming mussels; please do improvise with different flavor combinations, liquids, finishers, etc. Serve with big hunks of bread, crisp toasts, French fries, rice, pasta or whatever floats your boat. Allow about 1 pound of mussels per person for a main course, or half that for an appetizer.