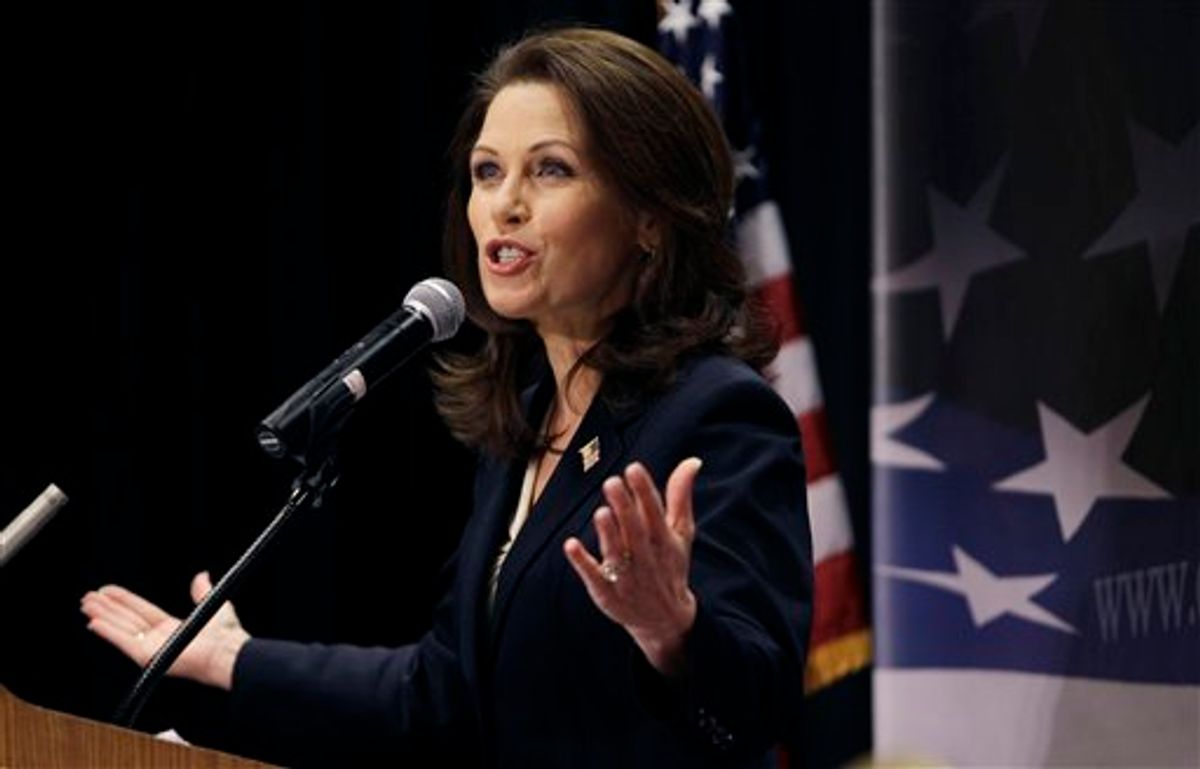 There have been two cattle calls in Iowa so far for aspiring Republican White House candidates. One was organized by the state chapter of a national "family values" organization chaired by Ralph Reed and  held three weeks ago in a fundamentalist Christian church. The other took place over the weekend at a conference organized by Rep. Steve King, a far-right congressman who once claimed that Barack Obama's election in 2008 would prompt "dancing in the streets" from Islamic terrorists around the world.

This is what it has come to for the Republican Party: The lead-off contest for its next presidential nomination -- an event that has played a vital role in winnowing GOP fields since 1980 -- will be utterly dominated by voters with ravenous appetites for  attacks on gays, Muslims, President Obama's "otherness" and godless liberalism in general.

No wonder Politico reports that Michele Bachmann was the big winner at Saturday night's conference, where she drew loud cheers for declaring, "We’ve been told we need a truce on social issues and I would highly disagree with that because social conservatism is fiscal conservatism" (even if the a straw poll at the event was won by Herman Cain, who is now pledging to appoint a Muslim-free cabinet, the better to prevent creeping Sharia).

And no wonder some pundits are seriously discussing the possibility that Bachmann might win next winter's caucuses. Of course she can. The Iowa GOP is conservative to begin with, and caucuses -- which attract lower turnout and require a much more significant time commitment from voters than primaries -- are ideally suited to maximize the influence of its activist base.

For more pragmatic national Republican leaders, who don't want their party to be identified with the Bachmann/Steve King wing, this is obviously a problem -- one that has been building for years. It's almost unfathomable now, but when Iowa first emerged as a key test in the GOP nominating process in 1980, the state's Republican caucus-goers actually rejected Ronald Reagan, instead handing a startling victory to a pro-choice, pro-Equal Right Amendment Yankee Republican named George Herbert Walker Bush. The victory was no fluke. Not only did Bush, then a little-known former U.S. ambassador to the United Nations, edge out Reagan by three points (32 to 29 percent), but the total combined vote for three other non-doctrinaire conservatives  (Howard Baker, John Anderson and Bob Dole) was 22 percent -- meaning that more than half of all caucus-goers in 1980 were comfortable voting for candidates without strong culturally conservative platforms. After scoring his upset win, Bush crowed that he suddenly had "the Big Mo" (momentum) and pulled even with Reagan in national polling -- after trailing by 26 points the week before the caucuses -- only to watch his momentum fizzle out in New Hampshire, thanks in part to some Reagan theatrics.

Iowa played the same role in 1988, boosting a less conservative candidate -- this time Dole, who played up his farm roots and distanced himself from some of the Reagan administration's economic policies (which was then unpopular in the upper Midwest, where the economy was reeling). He crushed Bush, who had reinvented himself a Reaganite during his eight years as vice president, changing his positions on abortion, taxes and other hot-button issues.

But the '88 results also contained a warning sign, with televangelist Pat Robertson beating out Bush for second place, with 25 percent of the vote. Robertson's campaign went nowhere after that -- he managed just nine percent in New Hampshire, finishing behind even the hopeless Pierre du Pont -- but the influence of the Christian conservatives who had rallied to him, in Iowa and elsewhere, only grew in the years to come.

The Moral Majority -- founded by Jerry Falwell when Jimmy Carter, who ran as a born-again Christian in 1976, refused to push for socially conservative policies -- had been channeling thousands of new culturally conservative activists into the GOP in the 1980s. After the '88 campaign, Robertson organized a group of his own, the Christian Coalition. Fundamentalist Christians began taking control of municipal, county and statewide GOP organizations, often nominating far-right candidates (who were still capable of winning general elections, if district lines were drawn the right way, or if the fall climate was hostile to the Democrats). And, of course, as the Christian right grew in prominence and clout within the GOP, the old pragmatic/moderate wing -- the heart of Bush's 1980 effort -- vanished.

This transformation has been particularly pronounced in Iowa. It pretty much explains the rise of King; he's not a born-again Christian (he lists his religion as Roman Catholic), but his politics are completely in line with those of the Christian right. He won a state Senate seat in 1996 and six years later won a crowded GOP primary for Congress, then coasted to victory in the fall, thanks to the district's Republican bent.

Since Robertson's run in 1988, there have been three competitive GOP presidential caucuses in Iowa. In 1996, Dole won again -- but with a severely reduced margin. Whereas in 1988 he'd scored nearly 40 percent and routed a sitting vice president, in '96 he managed a paltry 27 percent, with Pat Buchanan nipping at his heels. In 2000, George W. Bush, faced minimal opposition; his money and endorsements had scared most of his opponents out of the race by the fall of 1999 (with John McCain pulling the plug on Iowa to focus on New Hampshire). But the Iowa campaign, such as it was, was a testament to the Christian right's clout. In one December '99 debate, The Des Moines Register counted "more than 20 direct references to the father and son of the Holy Trinity of the Christian faith." While Bush, who repeatedly stressed his Christianity, ended up winning handily, the 2000 caucuses also represented the high-water mark for Alan Keyes' political career: He got 14 percent, good for third place. Eight years later, Mike Huckabee romped to a nine-point win -- with 34 percent of the vote -- over Mitt Romney.

And now, as 2012 approaches, the set-up seems perfect for the national GOP's nightmare scenario, one that has been three decades in the making. Unlike 2000, there's no George W. Bush in the current GOP field, a candidate with strong appeal to both the pragmatic party "establishment" and the right-wing base in Iowa. And (unless he decides to jump in), there isn't even a Huckabee, someone capable of at least putting a friendly face on the Iowa GOP's extremism. But there is Michele Bachmann. And Rick Santorum. And Newt Gingrich. And maybe Sarah Palin, if she were to run. And maybe even Herman Cain (you never know). It's hard to imagine any of them winning the GOP nomination next year, but one of them could very well win Iowa, and emerge as a major player on the national stage throughout '12 -- a non-stop headache for a GOP that desperately wants swing voters to see the party as something more than a collection of hysterically irrational ideological extremists.