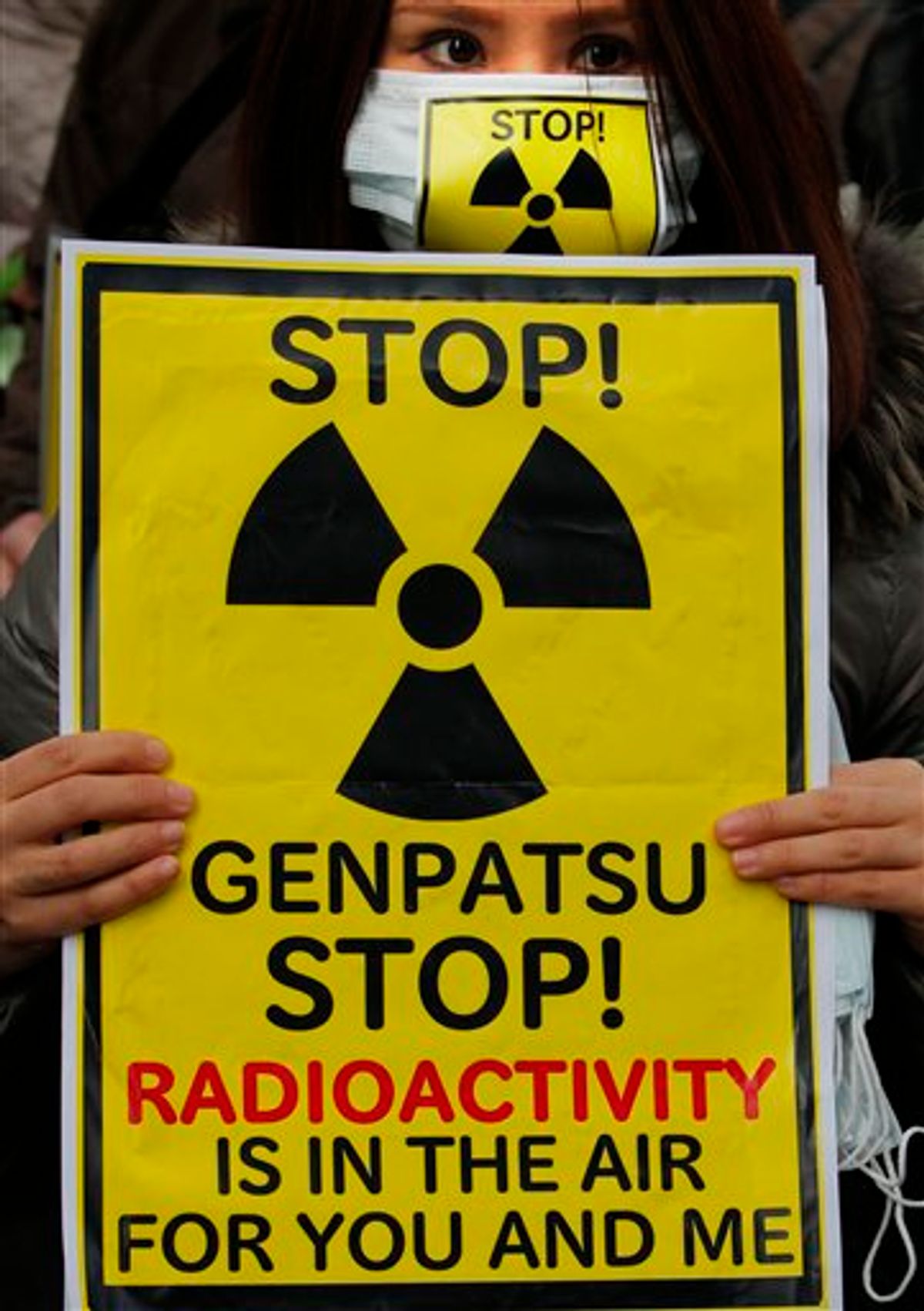 Workers at Japan's damaged nuclear plant raced to pump out contaminated water suspected of sending radioactivity levels soaring as officials warned Monday that radiation seeping from the complex was spreading to seawater and soil.

The coastal power plant, located 140 miles (220 kilometers) northeast of Tokyo, has been leaking radiation since a magnitude-9.0 quake on March 11 triggered a tsunami that engulfed the complex. The wave knocked out power to the system that cools the dangerously hot nuclear fuel rods.

The frantic effort to get temperatures down and avert a widening disaster has been slowed and complicated by fires, explosions, leaks and dangerous spikes in radiation. Two workers were burned after wading into highly radioactive water, officials said.

On Monday, workers resumed the laborious yet urgent task of pumping out the hundreds of tons of radioactive water inside several buildings at the six-unit plant. The water must be removed and safely stored before work can continue to power up the plant's regular cooling system, nuclear safety officials said.

Workers also discovered radioactive water in the deep trenches outside three units, with the airborne radiation levels outside Unit 2 exceeding 1,000 millisieverts per hour -- more than four times the amount that the government considers safe for workers, TEPCO said Monday.

The five workers in the area at the time were not hurt, spokesman Takashi Kurita said. The pits are designed as pathways to allow workers to lay out drainage pipes or electrical wires.

As officials scrambled to determine the source of the radioactive water, Chief Cabinet Secretary Yukio Edano said the contamination in Unit 2 appeared to be due to a partial meltdown of the reactor core.

A TEPCO spokesman said the presence of radioactive chemicals such as iodine and cesium point to damaged fuel rods as the source. However, pressure inside the containers holding the reactors was stable, indicating any meltdown was only partial, spokesman Kaoru Yoshida said, suggesting that the core remains largely intact.

New readings show contamination in the ocean has spread about a mile (1.6 kilometers) farther north of the nuclear site than before. Radioactive iodine-131 was discovered just offshore from Unit 5 and Unit 6 at a level 1,150 times higher than normal, Hidehiko Nishiyama, a spokesman for the Nuclear and Industrial Safety Agency, told reporters.

Japan's nuclear watchdog, the Nuclear Safety Commission, said Monday its members -- government-appointed experts who monitor the atomic industry -- believe the radioactive water came from the containment vessel. It did not clearly state that the primary containment vessel, which protects the core, had been breached.

It could take weeks to clear out the radioactive water, said Gary Was, a nuclear engineering professor at the University of Michigan.

"Battling the contamination so workers can work there is going to be an ongoing problem," he said.

Edano, the government spokesman, urged residents to stay out of the 12-mile (20-kilometer) evacuation zone around the nuclear complex, saying contaminants posed a "big" health risk. He was responding to reports that people had been sneaking back in.

Meanwhile, a strong earthquake shook the region and prompted a brief tsunami alert. The quake off the battered coast of Miyagi prefecture in the northeast was measured at magnitude 6.5, the Japan Meteorological Agency said. No damage or injuries were reported.

Scores of strong earthquakes have rattled Japan over the past two weeks, adding to the sense of unease across Japan, where the final death toll from the March 11 disasters is expected to top 18,000 and hundreds of thousands remain homeless.

Confusion at the plant has intensified fears that the nuclear crisis will last weeks, months or years amid alarms over radiation making its way into produce, raw milk and even tap water as far away as Tokyo.

TEPCO officials said Sunday that radiation in leaking water in Unit 2 was 10 million times above normal -- an apparent spike that sent employees fleeing. The day ended with officials saying the huge figure had been miscalculated and was 100,000 times above normal, still very high but far better than the earlier results.

"This sort of mistake is not something that can be forgiven," Edano said sternly Monday.

"We will work hard to raise our precision in our work so as not to repeat this again," he said at a news conference.

The crisis did not interrupt a yearly rite much loved by the Japanese: the start of the cherry blossom season.

Cherry trees typically begin blooming in the south in March, in the capital days later, and in the chilly north in April -- the signal that spring has arrived.

Pink and white buds appeared at the Yasukuni Shrine in Tokyo on Monday, the country's meteorological agency said.