I bristle at the idea that my gender is causing grade inflation. That notion misunderstands women -- and teaching 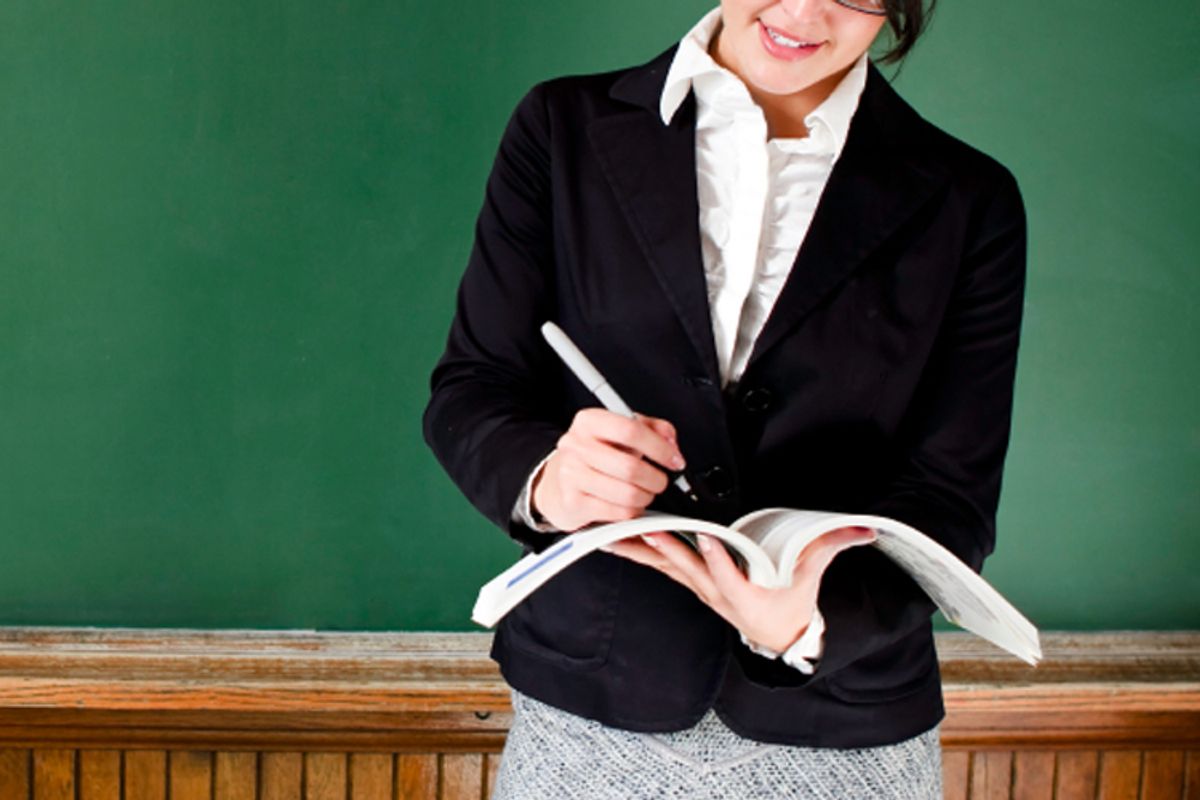 No doubt, Professor X will find himself lauded as the reluctant hero who is one of the rare college instructors not only willing to give students the F they deserve, but to also write about it unflinchingly, while letting his readers know that he's really a nice guy who agonizes over each of the failing grades he must administer. It's not his fault that, as he describes in his book (recently excerpted on Salon), he is toiling away in a feminized academy where, he surmises, the influx of women professors has created rampant grade inflation. According to Professor X, feminine qualities have compromised the mental toughness and rigor once necessary to get through college and replaced these with a reliance on compassion and nurturing.

As a (female) professor who knows many other (female) professors, I wouldn't dream of generalizing about all of academia like Professor X does. But I can tell you from my own experience that Professor X has it wrong. Of course women can be as tough, even tougher, than male professors. But it's not "nurturing" in the classroom that has led to grade inflation. It's that nurturing -- or, if you prefer the word, "coaching" -- can lead to better teaching.

When I moved from an Ivy League institution, where I had been teaching freshman composition classes as part of my graduate work, to a small state university, where I was teaching composition and creative writing, I experienced culture shock. No longer was I dealing with students who would come into my office demanding to know why I had given them an A- on their freshman compositions. Ivy League students would assert that they had never gotten a grade so low, and now I was dooming them to not getting into medical or law school.

Instead, when I arrived at my teaching job, I found students who came to college without a clear sense of why they were there. Many of them came from towns where they were one of the few from their high schools who had gone off to college. Instead of spring breaks spent in Jamaica, or summers spent touring Europe, many of my new students had never traveled outside their immediate environs (thus explaining why the students refer to the rolling hills that surround our campus as "mountains"). They didn't read outside of class. They seemed to have no intellectual curiosity. I felt as if I had been sent to the academic equivalent of Siberia. In my first semester only, I hesitated to enter final grades into the computer system because students had failed; many had struggled for the low C's I now had to record. I finally sent the grades off, and then I waited for the onslaught of angry students. None came. Somehow, for them, a "C" was enough. And even the F students didn't contact me to ask why they had failed.

For a while then, motivating myself to stand before class each day required enormous doses of caffeine and sugar. I felt as if I were teaching entire classes full of Aethelreds -- the Unready, and, worse, Unwilling.

Quickly enough, I grew up.

I learned that my job was not to assume that students already knew what I was going to teach them. My job was, in fact, to take them from not knowing to knowing. And how could I best do that?

I teach a creative writing course that attracts potential writers. But, because my course also serves as a general education requirement, most times over half my students come to me from physical education, the early childhood education department, criminology, math and various sciences. They are not writers.

On the first day, I tell them that we will be reading three to four books, a number of published essays, and that they will write both a five-to-seven-page paper and a 15-to-20-page paper during the semester. Some of them freeze in their seats. "I've never written more than five pages," someone usually says.

My process for teaching writing is quite simple. I treat them all as if they were magazine writers, and I am their editor. They turn in their papers: I copy-edit, offer editorial comments and assign grades. Many students, at first, wind up with grades far lower than they expected. I point out that no one writes perfectly. Editors exist at the professional level. The student is then given a choice. He or she may revise the paper (that is, re-vision what the writer is trying to say), on the chance that a higher grade may be given (but there's no guarantee), or accept the original grade.

Most of my students choose to rewrite. For many of them, it is the first time they have ever had to revise a paper. If, in an English class, students get only one shot at getting a paper right, we are not teaching them how to get better. We are simply grading them on what they already know about writing. When I offer editing to my students, I am not trying to turn them into carbon copies of me: I am trying to help them find their voices and to be able to express their thoughts with clarity.

I still give out C-minuses. Some students improve, but rather than the failing level at which they start, they eke out a C. But rarely do I fail students in my writing classes these days. They receive the grades they earned -- not ones I give.

During my course, they have learned to revise their own writing. And me? I no longer look at my students as the unready and the unwilling. Early along the way, I revised my sense of what it is to teach.

We really cannot generalize about a "female" or "male" way of teaching, and the assumption that the increasing number of women academics has led to grade inflation is ridiculous. For example, I would not generalize that all (female) professors sometimes prosecute their students for plagiarism. Yet I know one who does. I wouldn't say that all (female) instructors demand a memento from the funeral that prevented a student's attendance. One I know wouldn't hesitate.

The generalization that I am willing to make, after 11 years before students and among colleagues, is that grade inflation is indeed the result of changing one's relationship to one's students. I don't stand in front of my classroom as the all-knowing prof. I offer to them a system, built upon the idea that once upon a time, I didn't know how to do these things, either. It's therefore my job to show them, rather than tell them, how it's done. It's turning, through good teaching, D's into C's and B's, C's into B's and A's, and students into writers. Sometimes, you start with an F.