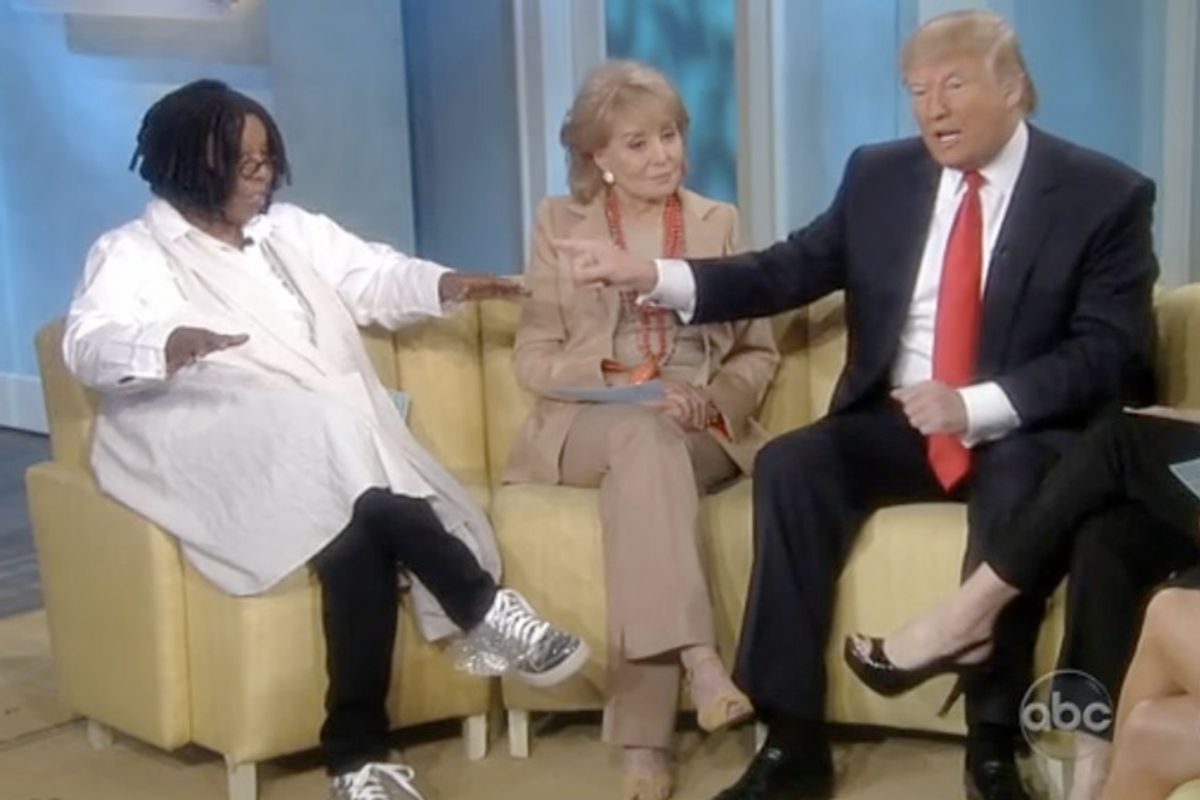 Garish television personality Donald Trump, a monstrous parody of entitled American wealth masquerading as skillful entrepreneurship, has lately decided to drum up interest in his various moneymaking schemes by pretending to be a political figure of some kind. His potential candidacy for anything is transparent hokum, which means everyone on television is treating it very, very seriously. And Trump has visited our nation's two most important venues for political discussion -- "The View" and "Fox & Friends" -- to mount a very interesting argument about our president's citizenship.

Traditionally, when a stupid person says stupid things on "The View" and is yelled at by Whoopi Goldberg, that person is then treated by Fox and other outlets of the conservative media as if he or she survived a brutal surprise attack of some kind. So when Trump called into "Fox & Friends" today, they were largely sympathetic. "TRUMP ACCUSED OF RACISM BY CO-HOST," the on-screen text read, and we all know that being accused of racism is literally the single worst thing that can happen to anyone.

So Steve Doocy, Gretchen and the other guy listened politely and patiently while Mr. Trump, on the phone from his home in an actual pile of his own noxious bullshit, rambled about birth certificates and his concerns about the president's citizenship:

"Now, this guy either has a birth certificate or he doesn't. And I didn't think this was such a big deal, but I will tell you, it's turning out to be a very big deal because people now are calling me from all over saying, please don't give up on this issue. If you weren't born in this country, you can not be president."

Right. Well. The president has a birth certificate, and everyone has seen it. It's that simple, end of story.

Trump is a professional entertainer, making it difficult to quantify how "seriously" he is taken by Americans, but there is no denying that he's one of the most famous people in the country, making him, in all probability, the most famous birther in the country. He's way more famous than Orly Taitz, more famous than Michele Bachmann, probably more famous than Sean Hannity and Lou Dobbs put together. When a Republican or conservative celebrity says something goofy, 50 percent of the population will automatically take it with a grain of salt, because of our splendid system of growing partisanship. But Trump isn't a specifically conservative celebrity. He's generally apolitical, and when he makes noise about politics, it's as a so-called independent.

I am just assuming that when Trump goes on a full media blitz telling everyone that Barack Obama has no birth certificate -- or childhood photos, or other demonstrably false claims -- that people who haven't been neck-deep in this nonsense since 2007 might be inclined to take it at face value.

Unlike trutherism, which is tolerated by no one anywhere close to the mainstream on either side of the partisan divide (Alex Jones was not invited to commiserate on "Fox & Friends" or MSNBC after his own weird "View" appearance), the right-wing media generally either ignores or indulges birtherism. And Trump will not be held to account for his idiocies by NBC, a network that desperately needs his television franchise to continue making it money. I'm guessing that the further into the Obama presidency we get, the more people will come to believe that he's secretly foreign.

All we can really do, I think, is promise, as a nation, to shun Donald Trump entirely. Stop interviewing him. Stop giving him television shows. Stop encouraging him.