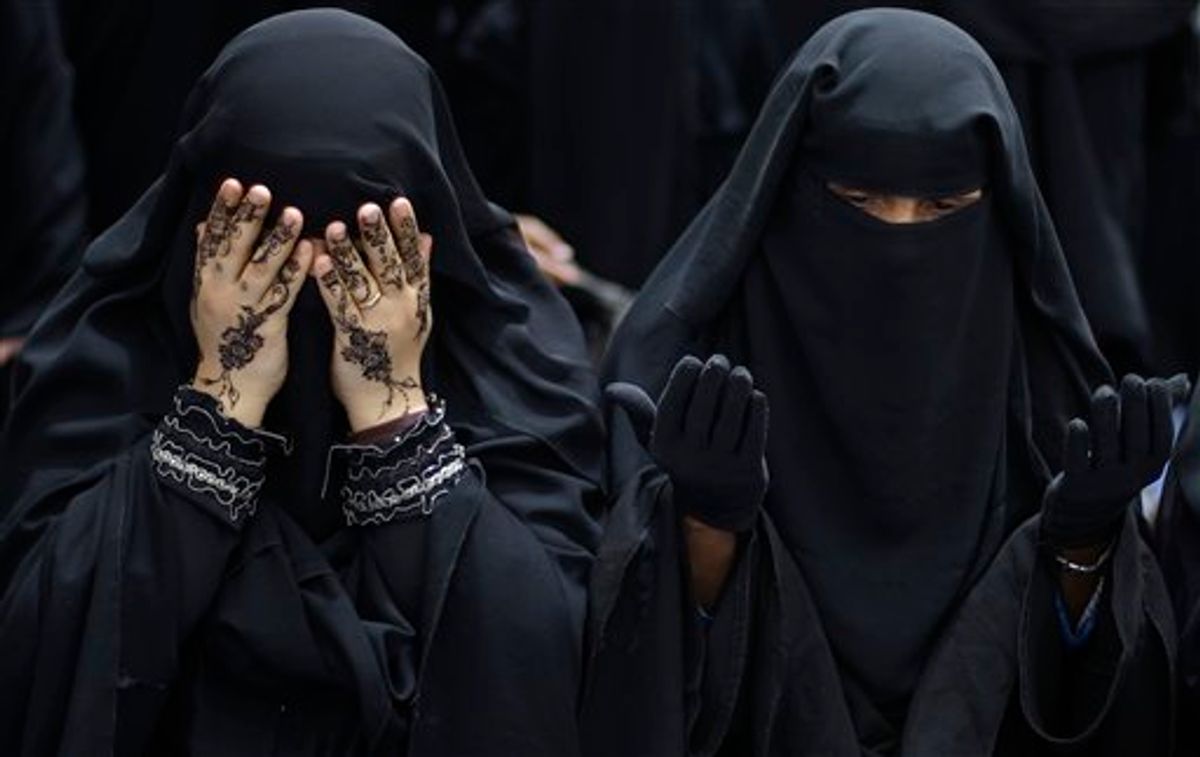 Female anti-government protestors react while chanting prayers during a demonstration demanding the resignation of Yemeni President Ali Abdullah Saleh, in Sanaa,Yemen, Sunday, March 27, 2011. Islamic militants seized control of a weapons factory and a nearby town in Yemen's south Sunday, said a witness and security officials, as political turmoil around the country causes security to unravel. (AP Photo/Muhammed Muheisen) (AP)
--

A powerful blast at a factory making explosives and weapons in southern Yemen killed at least 110 people on Monday, according to Reuters. The explosion occurred after the facility was briefly taken over by Islamic militants and then looted by residents of the area, officials said.

Many women and children from the surrounding villages were killed in the explosion, which left bodies blackened and burned, said medical and security officials in Abyan province. The blast appeared to be accidental, and one factory worker said it was caused by a looter who dropped a lit cigarette that ignited a heap of gunpowder.

The tragedy was rooted in Yemen's rapidly deteriorating security under a surge of unprecedented protests that threatens to topple the autocratic president who has ruled the impoverished and divided nation for 32 years.

On Sunday, militants took over the factory and the nearby the town of Jaar, taking advantage of the growing lawlessness in a part of Yemen that was already largely beyond the government's reach. Like several other parts of Yemen, police and security forces there had melted away in the face of the political unrest.

The militants are adherents of the ultraconservative Islamic movement known as Salafism. The allegiance of their particular group is bought by Yemen's government, while other Salafis agitate for the its overthrow and the establishment of Islamic rule. Nonetheless, seeing an opening to seize weaponry, the group took what they wanted and left.

Later, dozens of locals entered the facility and looted whatever they could find, including cables, doors and vehicle fuel, Mohammed said.

Some of the looters emptied large barrels of gunpowder because they wanted to use the containers for storing water, Mohammed said. A cigarette ignited what he said were massive piles of the explosive.

Among the wounded, 27 people were in critical condition, said officials at al-Razi hospital in Jaar. They spoke on condition of anonymity because they were not authorized to speak to journalists.

Chinese specialists working at the factory left several days ago because of the political turmoil and the absence of security in the area, said resident Walid Mohammed Muqbil.

Another resident, Seif Mohammed, said the blast could be heard 10 miles (15 kilometers) from the factory.

Yemen has been hit by weeks of unrest and unraveling security as protesters throughout the country demand the president's ouster and the introduction of political freedoms. A government crackdown has killed 92 protesters, according to the Shiqayiq Forum for Human Rights.

As the situation has escalated, police and security forces have withdrawn from some towns and cities in Yemen, chased out by protesters in some cases.

The area around the weapons factory was one of the places where units abandoned their posts.

The deputy governor of Abyan province, Saleh al-Samty, blamed the national government for the tragedy, saying it was a result of the lack of order resulting from the security pullback.