The official U.S. citizenship test is appallingly agnostic about the cause of the Civil War 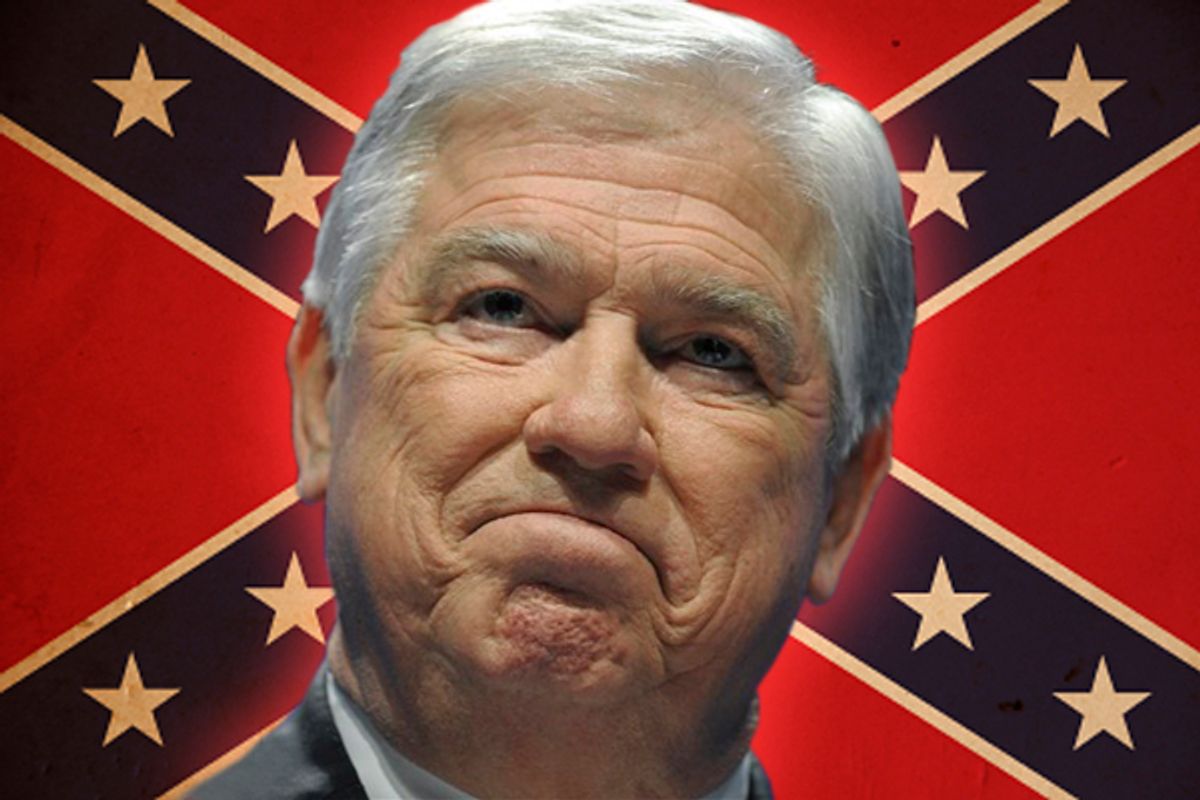 Mississippi Gov. Haley Barbour recently acknowledged that the Civil War was fought over slavery. As reported by Politico, Barbour recognized that "Slavery was the primary, central cause of secession." That may not seem like news, but many Southerners have insisted that the "War of Northern Aggression," as they call it, was fought over more palatable issues, such as states' rights or economic autonomy. That is nonsense, but it still took some courage for Barbour, in an interview with professor Robert S. McElvaine of Millsaps College, to repudiate a long-held myth about the nobility of the "Lost Cause."

Of course, Barbour's repudiation of secession is no doubt prompted, at least in part, by his all-but-declared candidacy for president. As a national candidate he will have to appeal beyond his Southern base, and that means rejecting Confederate apologia in favor of, well, actual history.

Now, if only the federal government would do the same thing.

Unbelievably, the official study guide for the U.S. citizenship test still lists three acceptable answers for the question about the causes of the Civil War: slavery, economic reasons and states' rights. The latter two answers, as Gov. Barbour now freely admits, are simply wrong. In fact, they are worse than wrong, because they obscure a central fact about American history. As Barbour put it, "the Civil War was necessary to bring about the abolition of slavery. Abolishing slavery was morally imperative and necessary, and it's regrettable that it took the Civil War to do it. But it did."

Needless to say, the Civil War, with its 600,000 casualties, would hardly have been necessary if it had been about nothing more than the division of power between the central government and the states, let alone some amorphous "economic reasons." And yet, that is precisely the lesson that will be learned by any aspiring citizen who diligently studies the government-provided model answers to the naturalization test.

The test is not equally agnostic about the causes of other American wars. There is only one correct answer -- "Communism" -- to the question about the United States' "main concern during the Cold War." Other quite plausible answers -- such as great power rivalry, third-world self-determination, or even Russian military expansion -- are evidently unacceptable. Even the ubiquitous "economic reasons" would be marked wrong.

Remarkably, the current version of the citizenship test is not simply an antiquated holdover from an unenlightened time. In fact, the United States Citizenship and Immigration Service (USCIS) thoroughly revised and updated it in 2008. The test contains several other incorrect answers, but none that are as egregious as misidentification of the causes of the Civil War.

It would be tempting to think that the Civil War question -- with its absurd alternative answers -- was included only as a sop to the Bush administration's Southern supporters, but President Obama has been in office for over two years, and the test remains unchanged.

On the 150th anniversary of the Civil War, only a die-hard neo-Confederate could claim that secession was motivated by anything other than the desire to protect slavery. As Confederate Vice President Alexander Stephens put it in 1861, the Confederacy's "cornerstone [rested] upon the great truth that the negro is not equal to the white man; that slavery, subordination to the superior race, is his natural and normal condition."

The Union troops had a different and far more moving ideal, which was immortalized in one of the later stanzas of the Battle Hymn of the Republic: "Let us die to make men free." It is, frankly, an insult to their memory that the USCIS naturalization test fails to recognize the cause for which they gave their lives.

In the Gettysburg Address, President Lincoln eulogized the men who gave "the last full measure of devotion" to bring about the end of slavery, and he asked for the nation’s resolve "that these dead shall not have died in vain." Mississippi Gov. Haley Barbour has forthrightly honored their sacrifice, and it is not very much to ask the USCIS citizenship test to do the same.

Steven Lubet is the Williams Memorial Professor of Law at Northwestern. He is the author of "Fugitive Justice: Runaways, Rescuers, and Slavery on Trial."