A decade after "Buffy," "Grey's Anatomy" brings on the song and dance. Is it time to retire a tired stunt? 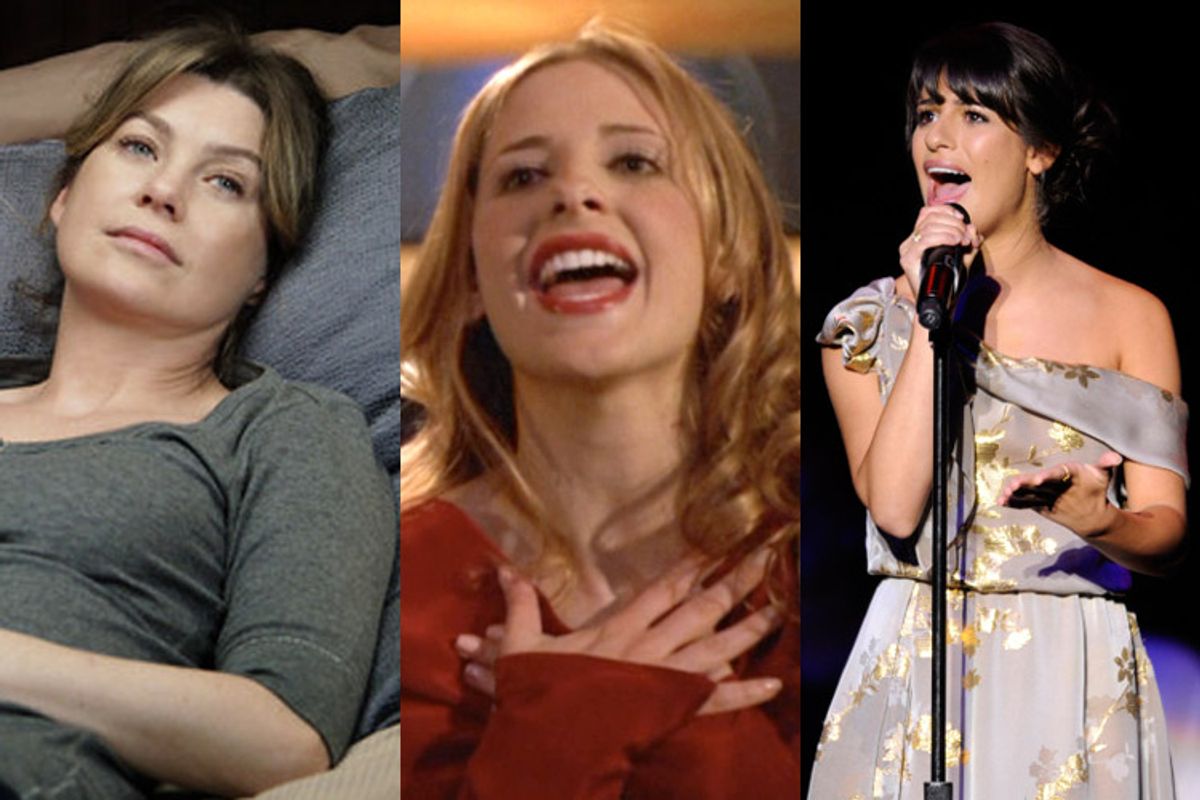 You know what happens to reasonably popular television series already several years into their runs. They suddenly acquire cute younger relatives -- a condition pioneered by Cousin Oliver and Scrappy Do. They will-they-or-won't-they themselves into a frenzy. They do a live episode. Or, as they'll do this Thursday on "Grey's Anatomy," they go musical.

It's been a decade since Joss Whedon and company gave us the audacious, unrivaled "Once More, With Feeling" episode of "Buffy the Vampire Slayer." Back then; anything that smacked of high school theatricals creeping into prime time was downright risky. Singing and dancing? As part of the plot? How old-fashioned could you get? Turned out, it was pure magic.

Although everything about the toe-tapping, bittersweet episode clicked, it would be another five years before the television musical really exploded, when a peppy Disney movie about a bunch of singing and dancing teenagers inauspiciously debuted and -- promptly became the biggest thing in the universe. "High School Musical" launched a thousand lunchboxes and became the top album of 2006. It also paved the way for the considerably more sexed-up combination of teens and show tunes that would become "Glee," that juggernaut of Journey tunes and jazz hands. And with the success of "HSM" and "Glee," a slew of other series have interrupted their regularly scheduled laugh tracks and dramatic montages for a little song and dance.

And why not? The back lots of Hollywood are littered with multi-hyphenates, men and women who didn't put in years at Juilliard just to bark, "Stat! He's coding!" week after week. The "Grey's Anatomy" musical event, for example, unfolds from the semi-comatose point of view of Callie, played by Tony Award winner Sara Ramirez. Ramirez has described the episode as "Like a dream I didn't even know I had coming true," but this being "Grey's," don't expect show tunes and overtures. The show instead will be an homage to the soft-alt hits used in episodes past, including "Breathe (2 am)," "Chasing Cars" and, of course, the "Freebird" of dramatic television music, "How to Save a Life."

The medical musical has a robust history on television. It first appeared back in 2007, when "Scrubs" snagged "Avenue Q" star Stephanie D'Abruzzo as a woman with an aneurysm that can turn a simple stool sample into a razzle-dazzle number like "Everything Comes Down to Poo."

And more recently, "House" went for a dark dream episode, capped by the creepiest version of "Get Happy" ever performed by a Brit acting like an American acting like Judy Garland.

When a show is known, as "Buffy" or "Scrubs" or even "House" is, for doing things a little differently, a musical diversion can redefine "very special episode" and turn the phrase into something that's actually good. "The Simpsons" has broken into song repeatedly over the years, with memorably tuneful results -- because that's "The Simpsons" for you.

And what would "Xena"  or "Family Guy"

or "Six Feet Under" have been without the surreal?

But when the orchestral maneuvers smack of gimmicky heart-tugging, "Glee" wannabe-ism, or anything involving The Fray, a show risks being flatter than Zach Braff's singing. And what was once a clever gambit is rapidly turning into the shark-jumping of the 21st century.

So will "Grey's" musical weepie be the most annoying thing to happen to song since Rebecca Black, or a chance for audiences to see -- and hear -- the cast in a bold new way? We'll have to wait till Thursday to find out, but in the meantime, let us praise those who've done it right.

Last year, for its 100th episode, "How I Met Your Mother," which has hilariously exploited Robin's shame-filled history as teen sensation Robin Sparkles in previous episodes, gave a grateful America something it can never get enough of: the great Neil Patrick Harris, singing and dancing like a bro version of Gene Kelly. Musical episodes remain a risk, but if all of television could be as good as NPH singing a tribute to his suits, the spoken word would be irrelevant.