Pervs and thieves on the Internet: A Hollywood history 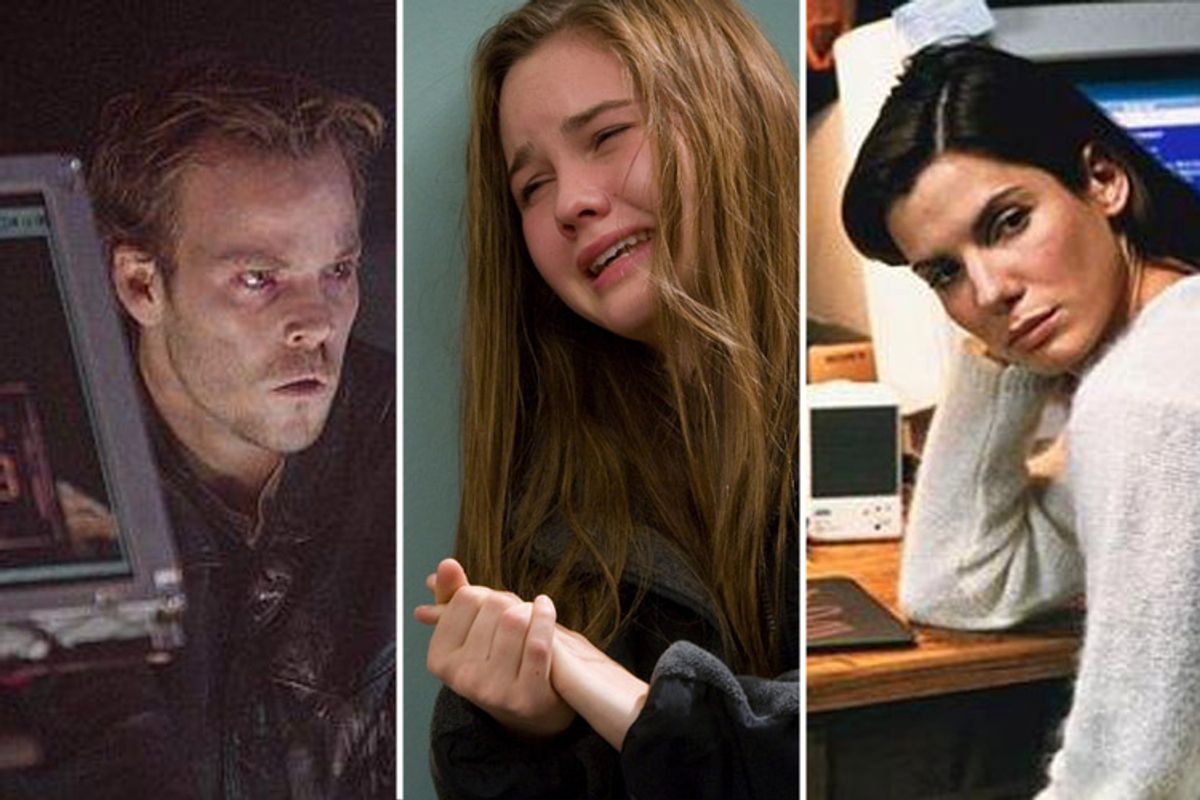 Ever since Sandra Bullock's paranoid whine, circa 1995 -- "They're watching me on the Internet!" -- digital culture has served as an all-purpose boogeyman for filmmakers. Even beyond the fact that with a computer (according to Hollywood) you can find anyone or anything within seconds, download state secrets ("I'm in!"), and launch another country's nuclear weapons, the Internet in movies has become a lazy shorthand for describing everything that's dangerous about modern communication and Today's Young People. That was a whole lot more understandable 16 years ago, when the Web seemed to many ordinary citizens like a mysterious and powerful Terra Incognita, than it does in 2011, when most people use the Internet every day as a combination of newspaper, mailbox, Yellow Pages and Sears catalog.

Yet this technological or generational gap -- I'm not quite sure which it is, or whether those are the right terms -- still exists, as evidenced by "Trust," a movie-of-the-week-style family drama that marks the directing debut of one-time "Friends" star David Schwimmer. A sober-sided film about an undoubtedly serious subject, "Trust" stars Clive Owen and Catherine Keener as suburban Chicago parents whose family is devastated when their teenage daughter (newcomer Liana Liberato) is befriended and "groomed" online by a sexual predator who at first pretends to be a boy a little older than her. Gradually "Charlie" (Chris Henry Coffey) raises the ante: First he admits to being a college sophomore, then a grad student; and when they meet in person he turns out to be just a touch older than that.

Schwimmer sits on the board of directors of the Rape Foundation in Santa Monica, Calif., and I don't question either his intentions or the painful reality that some teenagers really are victimized by people they meet online. But it's difficult to make a film about sexual predation without simultaneously descending into exploitation and recovery-speak, and for all its sincerity a whole lot of "Trust" is squirm-inducing, icky and formulaic. It's just as difficult to make a movie about youth culture on the Internet that isn't driven by incomprehension and panic. Like so many movies about the hidden dangers of teenage life, this old-fashioned psychological drama, with its well-wrought scenes of tears and shouting and violence, is likely to strike real-life teenagers as painfully ridiculous.

To borrow the terminology of 1960s media theorist Marshall McLuhan, one problem may be that the Internet is inherently a "cool" medium, which delivers information in fragmentary form and fosters an attitude of savvy detachment. Movies can come in many flavors, but conventional cinema is a "hot" medium that seeks to sweep you up into a fully absorbing emotional and visceral experience. There's no question that some filmmakers have successfully combined the two approaches, packaging a conventional "hot" character narrative inside "cooler," geek-friendly allegories about perception and technology. That describes the "Matrix" movies, of course, along with Steven Spielberg's "Minority Report" and pretty much the entire career of Christopher Nolan. (Duty propels to me to mention "The Social Network" at this point, but it doesn't have much to do with this discussion, since it's a movie set in the world of technology that has almost nothing to say about it.)

Now, I could go all techno-utopian on you and argue that younger filmmakers will eventually start making better movies about the Internet. Sure, probably, maybe: There's the much-debated documentary "Catfish," of course, and Antonio Campos' festival fave "Afterschool," which brought film-school cool to a YouTube-influenced prep school drama. I think you can honestly make a case that Miranda July's "Me and You and Everyone We Know" is the only good movie to use Internet dating as both a plot device and as subject matter; it's like the antidote to the unbearable "You've Got Mail." But I come here not to praise Internet movies but to bury them. It's more fun to honor those films and filmmakers who've gotten the Internet most bafflingly wrong. If you have nominations, please chime in.

The Net Somewhere between ludicrous and ludicrously sublime, "The Net" features Sandra Bullock as the first-ever movie character to have her identity hacked on the Internet. (There have since been 287 others; I counted.) It often feels as if the screenwriters had heard words like "desktop" and "virus" but didn't know what they meant. The important message, of course, was that "cyberspace" was dangerous. (Bullock's character also orders a pizza on the Net, which wouldn't become possible for several more years or common for at least a decade. Eerie!)

Hackers OK, I haven't seen this since it came out, and let's admit right now that "Hackers" has developed a culty second life among exactly the population it sought to inspire. I think that has more to do with the largely imaginary mid-'90s fashions, the presence of the young Angelina Jolie and with its "TRON"-inspired graphical representations of data-flow than with any kind of accuracy. Somehow the catchphrase "Hack the planet!" didn't catch on.

FeardotCom No, this abominable misfire wasn't the first horror movie about a website that kills you when you look at it (and not through boredom or laughter, either). That idea was almost old hat in Japanese horror by 2002, but "FeardotCom" -- the official Warner Bros. site was called feardotcom.com, awesomely -- it certainly introduced Americans to that terrifying but idiotic premise. (Which was explored in vastly superior fashion a few years later in Kiyoshi Kurosawa's "Pulse.") Stephen Dorff and Natascha McElhone play New York detectives on the trail of a "ghost site," i.e., a site created by ghosts seeking revenge on serial killer Stephen Rea. Since their revenge apparently consists of killing innocent people, I don't totally get it. But whatever.

Swimfan (aka "Swimf@n") Yeah, it's just a teenage "Fatal Attraction" love triangle with nearly naked protagonists (Jesse Bradford, Erika Christensen and Shiri Appleby), a lot of scenes in the pool and some text messaging thrown in to seem vaguely hip. Why are you opening Hulu in a new window?

Chatroom Japanese horror director Hideo Nakata makes his Western crossover attempt with this sleek thriller starring Aaron Johnson as the ringleader of an online suicide cult, which premiered at Cannes last year. It has no United States distribution and may wind up going straight to VOD and DVD, so let's just say that Nakata's translation of online chat sessions into ultra-Goth party sequences are A) kind of cool to look at and B) utterly irrelevant to the actual Internet.