Before Bachmann: The 5 craziest GOP candidates of the modern era

The 5 most embarrassing Republican presidential candidates of the modern era 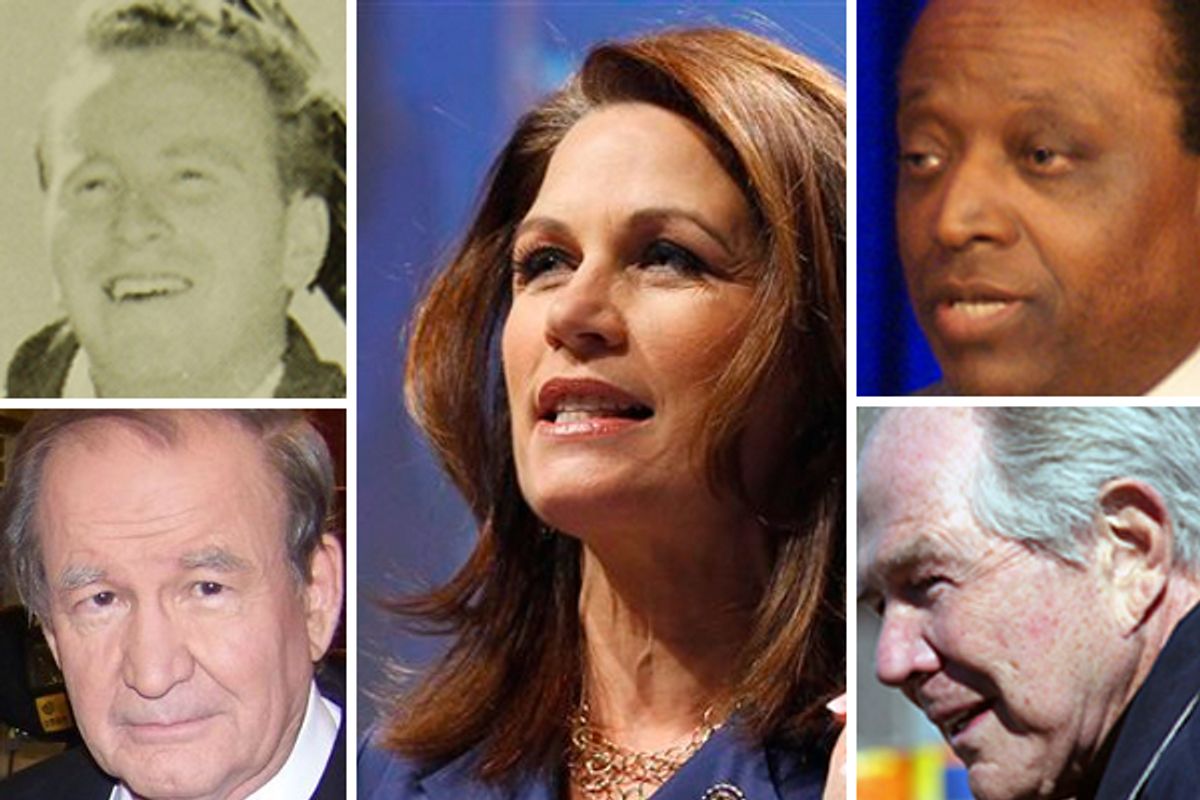 For respectable Republicans, the embarrassment potential may be at an all-time high. The party is a year away from picking its next presidential candidate and never in the modern era has it faced a vacuum like this.

Sure, the odds are still strong that the GOP will ultimately settle on a "harmless enough" general election candidate -- someone sufficiently generic and inoffensive to ensure that the party doesn't fall far below its natural level of support in the fall of 2012. But the road from here to the convention looks unusually -- and, if you're a Democrat, comically -- rocky for Republicans.

The party's base -- which nominated several utterly unelectable candidates in several high-stakes Senate races last year -- is in revolt, thirsting for purity and likely to accede to a Romney or Pawlenty nomination only with reluctance. Before then, it figures to be tempted by an atypically large collection of red meat-spouting long shots: Michele Bachman, Newt Gingrich, John Bolton, Rick Santorum, maybe even Sarah Palin or (why not?) Herman Cain -- personally and politically polarizing extremists who validate a damaging stereotype of the Obama-era GOP. It's not impossible that one of these ideologues will fare surprisingly well in one or more of the early nominating contests next year (most likely activist-dominated Iowa).

It is this possibility that makes 2012 potentially different from previous Republican contests, in which the party has generally -- but not always -- succeeded in keeping the embarrassments to a minimum. Here's a look at the most embarrassing Republican candidates to be taken (at least somewhat) seriously by the media since 1980:

The heir to Donald Rumsfeld's old House seat, Crane came to Congress in 1969, a Goldwater campaign veteran made good. He spent the '70s racking up one of the most conservative voting records in the House and, in the wake of Ronald Reagan's unsuccessful 1976 White House bid, set out to run for the presidency himself in 1980. (His theory was that Reagan, because of age and his two failed bids for the GOP nod, would end up passing on '80, leaving Crane to gobble up "New Right" support.)

Crane's politics weren't really more conservative than Reagan's, but unlike the Gipper, he didn’t know how to mask his extremism with warmth and charm. Instead, he conformed to the popular image of a far-right whacko, purchasing (for instance) 30-minute blocks of time to air a speech in which he held up the Bible and quoted from it in an effort to establish America's Christian roots. He also attracted unwanted attention when, at the height of the campaign, he was sued by Richard Viguerie, the direct mail pioneer, for unpaid bills.

More damaging, though, was the wrath of Bill Loeb, the notoriously vengeful publisher of New Hampshire's largest (and most conservative) newspaper, the Union-Leader. Fearful that Crane's presence in the race would hurt Reagan, Loeb skewered him in a series of front-page editorials, then commissioned a devastating story that used anonymous sources to portray Crane as a serial philanderer with a drinking problem. The story attracted national attention and helped Loeb achieve his goal: Crane finished a distant fifth in Iowa and won only 2 percent in New Hampshire. (Years later, he would publicly admit to a drinking problem and seek treatment.)

The pioneering televangelist's candidacy was the logical consequence of the rise of the Christian right, which emerged as a force and embraced the Republican Party during Jimmy Carter's presidency.

But Robertson, the founder and president of the Christian Broadcasting Network, was a particularly kooky frontman for this movement. By the time he announced his candidacy for the '88 GOP nod, he already had one false Armageddon prediction under his belt (1982 would be the year, he'd forecasted in '76) and had also taken credit for using prayer to steer Hurricane Gloria away from New York City in 1985. As a candidate, he sought to present himself as a businessman more than a religious leader, bristling at suggestions that he had "followers" and accusing Tom Brokaw of religious bigotry for calling him a "televangelist" during one debate.

You can imagine, then, the profound embarrassment -- and fear -- that mainstream Republicans felt on the night of February 8, 1988, when Robertson finished 6 points ahead of Vice President George H.W. Bush to claim a shocking second place in the Iowa caucuses. Robertson quickly ran out of momentum -- he finished dead last in New Hampshire a week later, behind even Pierre S. du Pont IV -- and was blown out in South Carolina. But the Christian Coalition that he founded in the wake of his campaign played an instrumental role in creating the Republican Party that we know today.

Less than two months before announcing his challenge to Bush for the '92 GOP nomination, Buchanan wrote a column offering advice to his party on how to win in the future: "Take a hard look" at the "portfolio of winning issues" being championed by … David Duke, the ex-Klansman who, in the fall of 1991, had won a place in Louisiana's gubernatorial runoff (in which he was thumped by Edwin Edwards).

This was par for the course for Buchanan, who had also used his media platform to opine that women were "less equipped psychologically" than men to handle the business world and to defend accused Nazi war criminals -- most notably John Demjanjuk. In the 1980s, he had also ridiculed third-world nations pushing for sanctions against apartheid South Africa, arguing that they were motivated by "racism and the resentment that failure always feels for success."

Buchanan went on to fare alarmingly well in the '92 New Hampshire primary, powered by the GOP electorate's frustration with the economy and Bush's broken "no new taxes" pledge. It was the high-water mark for Buchanan's '92 campaign, although it also helped him earn a prime-time speaking slot at the '92 convention -- a speech best remembered for Buchanan's divisive declaration of "culture war" and his long-windedness, which knocked Ronald Reagan's speech out of prime time.

Four years later, Buchanan gave the GOP an even bigger headache when he finished a close second in Iowa and then won New Hampshire, although his momentum was quickly arrested as a panicked party establishment rallied around Bob Dole.

(Note: Duke himself also sought the '92 GOP nod, although he's not included in this list on the grounds that -- unlike the others -- he was thoroughly isolated and shunned by the party's establishment. No one respectable would touch him, not even Buchanan.)

A few highlights of the political career that preceded "B-1 Bob's" absurd 1996 White House bid:

* On the House floor in 1985, he attacked fellow Rep. Tom Downey as "a draft-dodging wimp," then grabbed the New York Democrat by his collar. Downey claimed that Dornan threatened him physically; Dornan said he'd merely been trying to straighten his tie.

* In 1993, he took the House floor to accuse President Clinton of giving "aid and comfort to the enemy" during the Vietnam War. He also branded the president "a flawed human being" and "a draft-dodging adulterer not fit to lace the boots" of America's troops.

* In 1994, he outed fellow Rep. Steve Gunderson on the House floor, making reference to the "revolving closet door" on the Wisconsin Republican's closet.

* During his 1992 House campaign, he bragged that "every lesbian spear-chucker in this country is hoping I get defeated." And when Dornan was confronted by AIDS activists at a public event, his wife snapped, "Shut up, fag!"

* Court records made public in 1994 indicated that Dornan had been convicted and ordered to jail in 1996 for physically attacking his wife (although there was no record he'd actually done time). Dornan and his wife denied that any abuse had occurred and blamed the case on a drug problem she had at the time.

Dornan ran on the slogan "Faith, Family and Freedom" but struggled to raise money and assembled a staff that consisted primarily of family members. One of his final acts as a candidate came at a New Hampshire party dinner the weekend before that state's primary. He literally begged the audience for sympathy votes, so that he would avoid the indignity of finishing with 0 percent. He didn't get his wish.

Described in one of Al Franken's books as a "Reagan administration functionary," Keyes entered politics in 1988, waging a hopeless Senate campaign against Democratic incumbent Paul Sarbanes in Maryland. He was trounced, but tried again four years later against Barbara Mikulski. He was slaughtered again, but this time he made national news -- for taking the unusual step of giving himself a salary of $8,500 per month with campaign funds. A few years later, he set out to run for president.

Keyes ran on a platform of Puritanical morality, lashing out at America's "licentious, self-indulgent culture," lashing out at the Clinton administration and its "condom czars" and focusing almost obsessively on abortion. He also had this exchange with a local right-wing radio host, as reported by the Chicago Tribune:

Muller says slavery has been misconstrued by many blacks. "This whole slavery thing has been bastardized into 'Oh, we were oppressed. Now we don't have to do anything because of what happened 300 years ago.'" Keyes, who is black, agrees, saying the devastation imposed on black families by liberal government programs, such as welfare, has been worse than slavery.