Is NYU's newest poetry teacher secretly farming out his own coursework to his students? 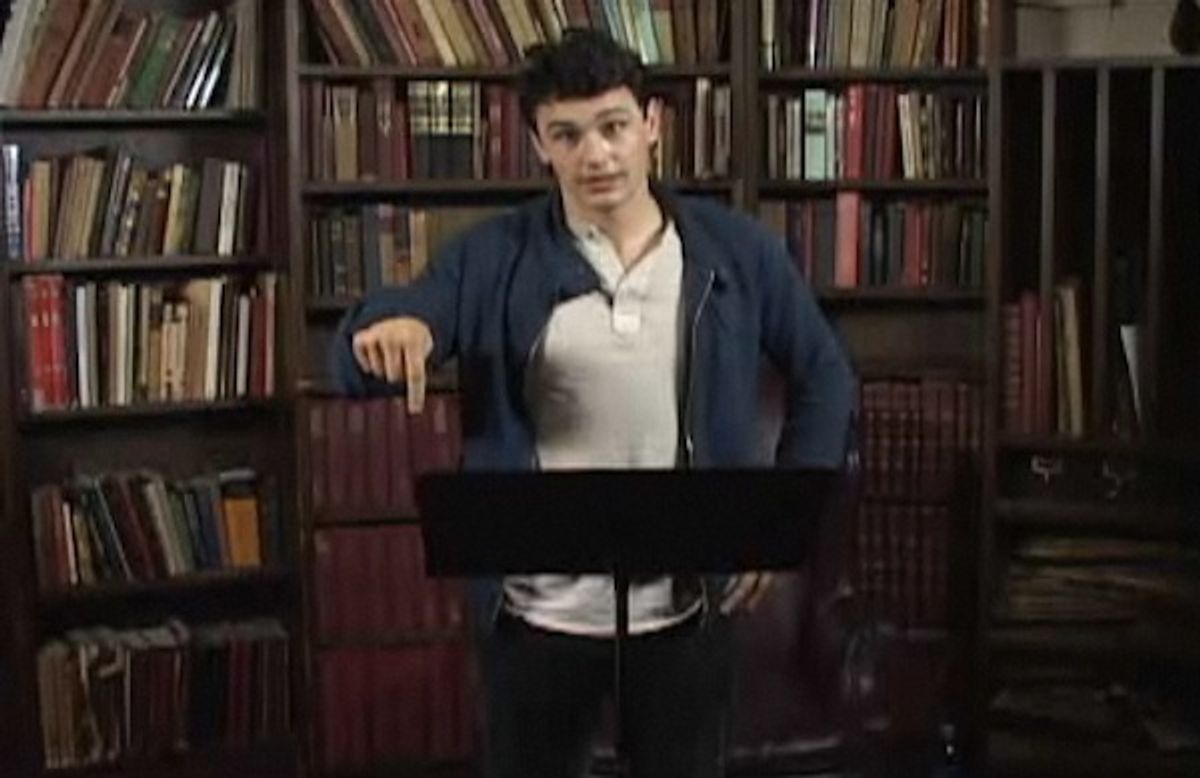 Will you do this man's coursework for him?
--

I think I've gone through every stage of the James Franco celebrity life cycle: Denial ("There is no way he's actually doing this much!"); Anger ("Screw that guy for making the rest of the world look bad!"); Bargaining ("Hey, if I could just score one 'Spider-Man' movie, I promise to get four master degrees as well!"); Depression ("My life sucks compared to this guy"); and Acceptance ("Fine, James Franco, you are a superhero. I give up"). The man is everywhere: from hosting the Oscars, to cutting a music album, to getting his Ph.D. at Yale for creative writing english literature while simultaneously getting an MFA at New York University. Not to mention his performance-art side projects he does with Kalup Linzy, or the class for Columbia College Hollywood that he's going to teach called "Master Class: Editing James Franco ... With James Franco." Or, you know, his acting career.

And add on to that the news that James will be teaching a third-year poetry class to NYU students about turning writing into short films. New York University --  where James will be getting his second MFA (he also received one at Columbia last year) in film editing in May, despite receiving poor grades at Tisch for never showing up -- is so happy to have him!

"He’s here to teach because he really knows something about directing that he can share with our students," John Tintori, chair of the graduate film program at Tisch, told the Post. "He’s incredibly prolific, and that comes from a real work ethic - and that’s another thing to impart to our students."

Yes, James Franco, currently attending two graduate programs at NYU and Yale along with his various host of other duties, will certainly have time to teach these kids. After all, he's going to be very hands-on with that Columbia College (Hollywood) course, isn't he? Well, he at least plans to Skype in, whenever possible.

"Master Class: Editing James Franco ... With James Franco" will be taught by Franco’s editor Tyler Danna … The actor ... will talk to students through Skype and attend weekly sessions, depending on his schedule."

While we know that teaching a class is par for the course for getting a doctorate, it's disheartening to see how many reputable schools will take on Franco's half-assed attempts at education in order to say that he's part of their program. It's even more upsetting to think that students who are paying to take the classes that Franco is supposedly "teaching" might end up doing Franco's work for him, without ever being taught by the actor.

See, we think we've finally figured out the secret to James Franco. He's one giant pyramid scheme: a Warhol factory that farms out his own work to other students under the guise of "teaching," while he himself barely participates. That "Master Editing Class" that Franco isn't teaching? The official press release gave a hint as to what its true purpose might be, and it's not about teaching students anything:

"(the class will) offer an innovative course through which 12 of the private film school’s best editing students will create a 30 minute documentary film from videographic footage from Mr. Franco’s own unorthodox career ... As conceived by Mr. Franco and Mr. Danna, the class sessions themselves will be taped and be part of the final film created by the class or another project."

Meaning Franco isn't just getting kids to edit a documentary about him, he's also taping the sessions and could use the footage toward his own NYU MFA in editing.

It's all one big scam where the cool kid in school convinces a group of other guys to do his work for him. (Actually, Franco's character on "Freaks and Geeks" tried to pull off a similar scheme.) Shame on the universities that are letting him get away with it just because he's famous.