Is kink the new girl-on-girl kiss?

Rihanna is the latest in a line of pop stars using S/M as an edgy symbol of empowerment. Too bad it doesn't shock 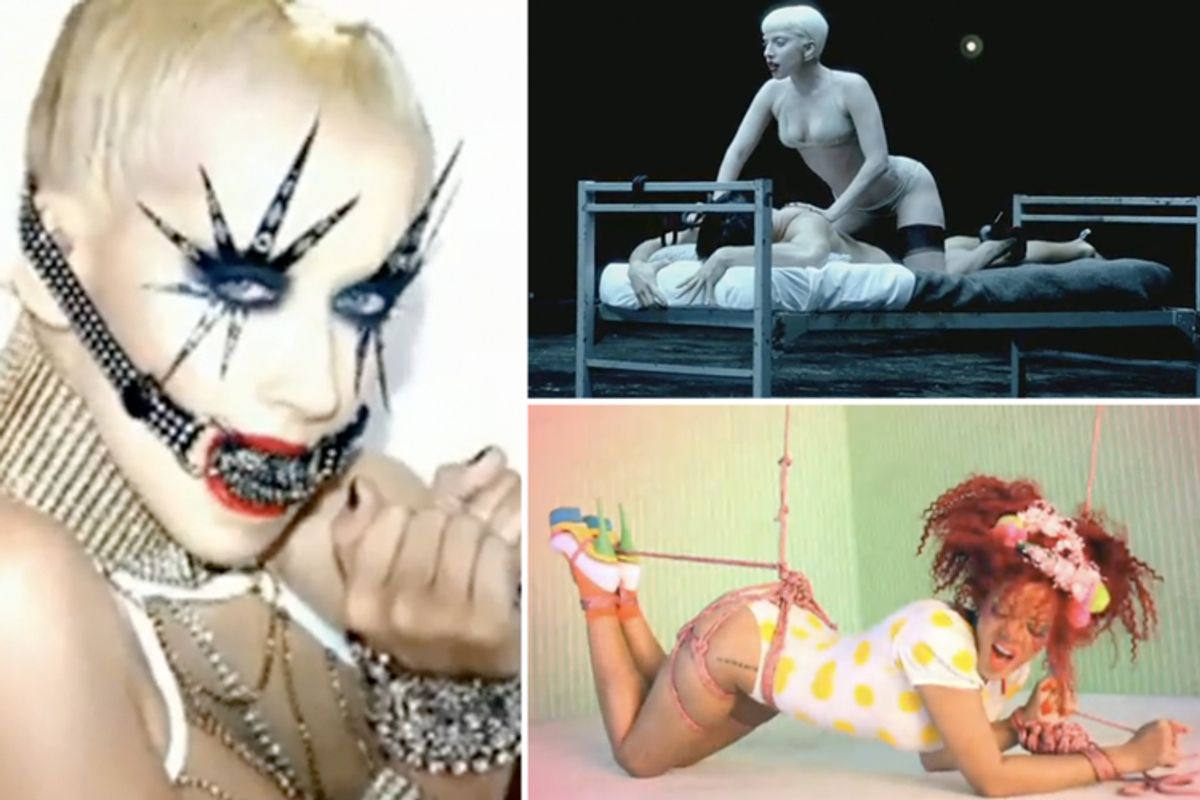 Stills from the music videos for "Not Myself Tonight," "Alejandro" and "S&M"
--

Have you heard? Rihanna likes rough sex. Just in case you didn't get the message from her recent single "S&M" -- which contains the subtle lyrics, "chains and whips excite me" -- she clarifies her position, so to speak, in the upcoming issue of Rolling Stone: "Being submissive in the bedroom is really fun." She adds, "I like to be spanked. Being tied up is fun."

Oops, sorry, still there? I dozed off for a second. Signaling an interest in mildly kinky sex has become pretty banal. Madonna and Janet Jackson have been there, done that -- and now we have a whole new generation of starlets who are acting like they invented the riding crop. Like the women before them, the latest set of kink-loving pop stars are using it as shorthand for female sexual empowerment -- the kind that, importantly, is still commercial and alluring to straight men. S/M is like the new girl-on-girl makeout. Forget "I Kissed a Girl" -- I fully expect the next breezy summer hit to be something along the lines of "I Was Spanked (And I Liked It)." As with most mainstream depictions of women's erotic power, I find it sad and totally exhilarating, all at the same time.

In case you've missed the recent flood of bondage-themed ephemera, allow me to fill you in. Rihanna is just the latest entrant with her ode to sadomasochism. The song itself is very sexual, of course, but the music video is more TV-friendly. She's shown trapped behind a wall of saran wrap in front of a bunch of tabloid reporters who are wearing ball gags. A nasty journo scrawls "slut" in capital letters in his notebook; a headline about her "daddy issues" scrawls across the screen. She takes bitchy gossip blogger Perez Hilton for a walk -- or crawl, really -- on a leash. It's S/M as a metaphor, a way for Rihanna to punish and humiliate the haters. She's saved the more literal S/M for her lyrics, wardrobe and interviews.

Ever since her post-Chris Brown reemergence, she's been playing with symbols of toughness. First it was guns, helmets and tanks (a look I went nuts for); now it's leather, whips and chains. She went from fearsome superheroine to sexy dominatrix and sometimes submissive. It's understandable that someone whose battered face went viral would take on just such a sexual persona. She even admits in the Rolling Stone interview that her taste for kink might have something to do with the abuse she suffered from her father; and, while it's by no means the rule, it isn't uncommon for people to cope with, and sometimes triumph over, past abuse through S/M. In that sense, Rihanna's kinky turn has depth -- but, make no mistake, it's also commercial as hell. In one shot from the music video, she's shown tied up, and everything -- her makeup, her outfit, the rope itself -- is in bubble-gum hues. It's rough sex mixed with the Harajuku Girls aesthetic. It's pop kink.

Of course, Lady Gaga has also toyed with bondage. The music video for "Alejandro" shows her mounting and dominating a muscle man clad in high heels; later, he takes a turn manhandling her. She's incorporated the kinky aesthetic into numerous photo shoots and performances; and let's not forget her single, "I Like It Rough." Lady Gaga being Lady Gaga, she manages to make the S/M overtones potentially subversive and threatening by pairing her light kink with some serious gender bending.

The same cannot be said for Christina Aguilera, who premiered her video for "Not Myself Tonight" last year. It's like she took the entire contents of a fetish store and dumped it on a Hollywood sound stage. She crawls around on all fours in a catsuit, dons a diamond-encrusted ball gag, wields a riding crop, writhes in a face mask, pours liquid latex all over herself -- and so on and so forth. (Aguilera is no stranger to attention-grabbing sex tricks, as her "Dirrty" phase proved.) The most authentically sadomasochistic thing about "Not Myself Tonight" is that it's torture to sit through. Per the usual, it's just a starlet playing at being bad. She even croons, "In the morning when I wake up I'll go back to the girl I used to be." Don't worry, she isn't one of those freaks who is actually serious about playing with leather and latex 24/7.

I won't lie -- I love hearing a pop starlet sing unapologetically about how whips and chains excite her. "S&M," "Not Myself Tonight" and "I Like It Rough" are probably among the top 30 most-played songs on my iPhone. This is because I have horrible taste in music -- but also because there's an element of aggressive female sexuality and subversion in these songs that I can't help wanting to celebrate. They speak to me on a visceral level. At the same time, I fully realize that the female sexual power in these songs is ultimately empty and limited. But it's the same as it's always been: Female pop stars expressing their sexuality in ways that are palatable to the mainstream straight (in all senses) audience. Whether it's by prancing around in a Catholic schoolgirl uniform or slipping into a latex jumpsuit, it's fundamentally the same damn thing.