The wisdom and legality of arming Libyan rebels

Does the latest proposed escalation violate a U.N. resolution? Does it matter? 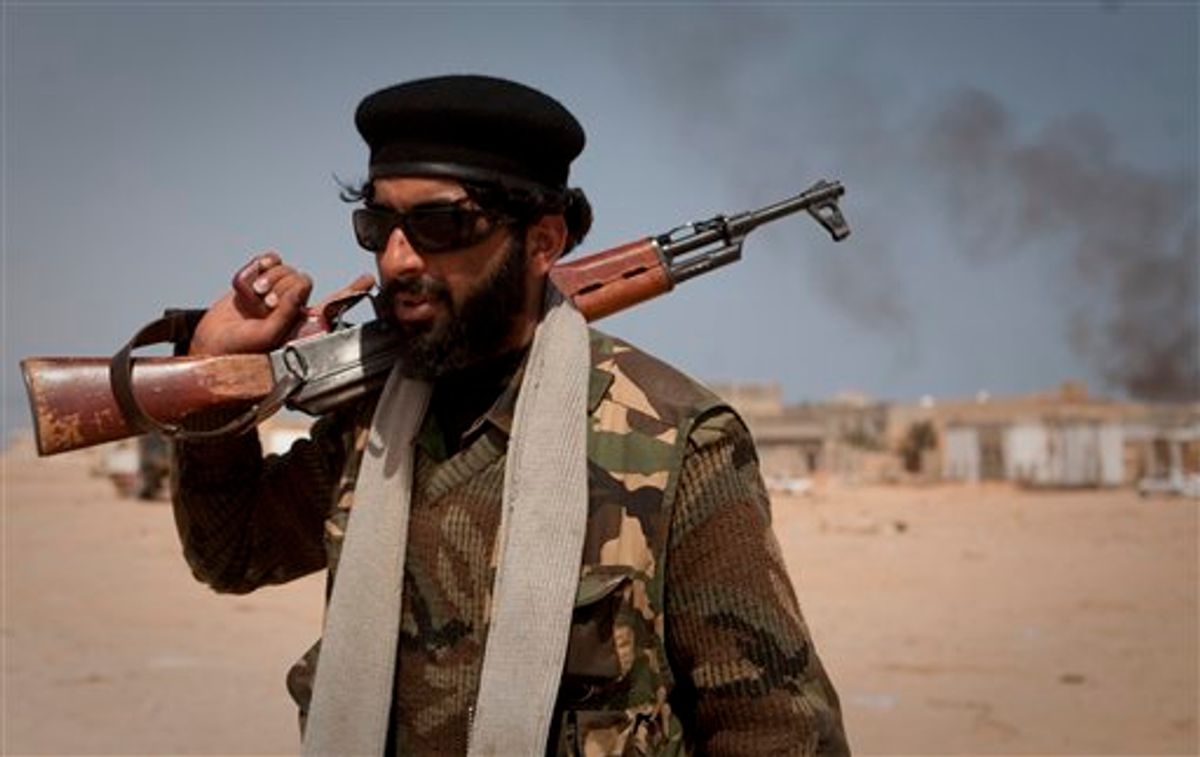 A Libyan rebel walks on the front line outside of Bin Jawaad, 150 km east of Sirte, central Libya, Tuesday, March 29, 2011. Rockets and tank fire sent Libya's rebel volunteers in a panicked scramble away from the front lines Tuesday, suggesting that the opposition is still no match for the superior firepower and organization of Gadhafi's forces, despite an international campaign of deadly airstrikes. (AP Photo/Anja Niedringhaus) (AP)
--

Whatever one thinks about the U.S. involvement in the war in Libya -- some substantial portion of my readers support it, though Republicans are more enthused about the U.S. taking a leading role -- it has unquestionably departed far from the claims that were made about it in the beginning. The no-fly zone was established long ago; the focus is now on attacking Gadaffi's ground forces, enabling rebel advancements, and regime change. Despite claims about Arab League and French leadership, the U.S. has provided the overwhelming bulk of bombs, jet fighters, intelligence and other resources. And now there is what The New York Times calls a "fierce debate" within the administration about whether to arm the Libyan rebels. Two points about all of this:

First, The Washington Post yesterday reported that "the U.S. military dramatically stepped up its assault on Libyan government ground forces over the weekend, launching its first missions with AC-130 flying gunships and A-10 attack aircraft designed to strike enemy ground troops and supply convoys." The Post article aptly explained the significance of this development:

The use of the aircraft, during days of heavy fighting in which the momentum seemed to swing in favor of the rebels, demonstrated how allied military forces have been drawn deeper into the chaotic fight in Libya. A mission that initially seemed to revolve around establishing a no-fly zone has become focused on halting advances by government ground forces in and around key coastal cities. . . . AC-130s were used to great effect during the two U.S. offensives in Fallujah, a stronghold of the insurgent group al-Qaeda in Iraq in the early days of the Iraq war.

Military officials consider AC-130s and A-10s well suited to attacks in built-up areas, although their use has led to civilian deaths. Unlike fighter jets and bombers, which typically carry 500- or 1,000-pound bombs, the AC-130s and A-10s deliver more discriminate but still devastating machine-gun fire.

That the war expanded that quickly and that substantially is an obviously significant fact to know. But, as FAIR's Peter Hart notes, The Post knew about this development for at least a week but concealed it from their readers at the Government's request; the article included this sentence: "The Washington Post learned of their deployment last week but withheld reporting the information until their first missions at the request of U.S. military officials."

The classic case for when newspapers justifiably withhold war information is "troop movements" -- learning but not reporting in advance where the U.S. intends to deploy troops or mount an attack. But this was not that case. The fact that the U.S. intended to deploy AC-130s was obviously known to the Libyan forces targeted by them; the true significance of reporting this would have been to reveal that the U.S. was involved in a more extensive war effort than was being suggested, and that it extended beyond merely creating a no-fly zone to protect Benghazi. To me, this concealment is more justifiable than, say, the NYT's concealment of Raymond Davis' CIA employment or its year-long non-disclosure of the Bush illegal NSA program -- at least there's an argument to make that disclosing the intended use of these weapons beforehand could help the Enemy by revealing war plans in advance -- but it still seems to be a clear case where an American newspaper is acting "patriotically" by withholding newsworthy information to help the U.S. Government propagandize its citizens.

Then there's the question of the legality of arming Libyan troops. Salon's Justin Elliott reported on Monday that the administration was actively considering arming the rebels despite an absolute arms embargo imposed by U.N. Resolution 1970 ("imposing an arms embargo on the country"). Today, The Guardian elaborates by citing numerous legal experts insisting that it would be a violation of the U.N. Resolution for the U.S. to arm the rebels. For its part, the U.S. insists that it is legally entitled to do so, with Hillary Clinton announcing that the arms embargo has been "overriden" by the broad mandate of U.N. Resolution 1973, allowing "all necessary measures" to be used to protect Libyan civilians.

On the strictly legal issue, this seems to be a close question. Can the specific arms embargo really be "overriden" by a general clause allowing the protection of civilians? That seems redolent of the Bush arguments that specific prohibitions in the law (such as the ban on warrantless eavesdropping) were "overriden" by the broad war powers assigned by the AUMF. More to the point, can it really be said that arming Libyan rebels is necessary for the protection of civilians? That sounds much more like what one does to help one side win a civil war.

Ultimately, though, does anyone really think these legal niceties will matter at all if the U.S. decides it wants to arm the Libyan rebels (and yesterday on Democracy Now, University of Trinity Professor Vijay Prashad claimed that one of the key rebel leaders lived in the U.S. -- in Vienna, Virgina -- for the past 30 years, "a 10-minute drive from Langley, and returned to Benghazi to, in a sense, I think, hijack the rebellion on behalf of the forces of reaction")? If the U.S. wants to arm the rebels, it will do so regardless of whether it violates any U.N. arms embargo, and few supporters of this war -- most of whom justify it by pointing to these U.N. Resolutions -- will care very much, if at all. Once wars begin, and positions harden, nothing matters less than legalities.

The real question is the wisdom of this escalated involvement. How many times do we have to arm one side of a civil war -- only for that side to then become our Enemy five or ten or fifteen years later -- before we learn not to do that any more? I wrote earlier on Twitter, ironically, that one good outcome from arming the Libyan rebels is that it will lay the foundation for our new war 10 years from now -- when Commander-in-Chief George Prescott Bush or Chelsea Clinton announce that we must wage war to stop the Libyan faction from threatening its neighbors and supporting Terrorism (with the weapons we provided them back in 2011). One of the most reliable ways that the posture of Endless War has been sustained is by our flooding the world with our weapons, only to then identify various recipients as our new (well-armed) enemy. Whether this is a feature or a bug, it is a very destructive outcome of our endless and always-escalating involvement in military conflicts around the world.

(1) Reuters reports today that President Obama "has signed a secret order authorizing covert U.S. government support for rebel forces seeking to oust Libyan leader Muammar Gaddafi." The specific form the order took was a "finding," or "a presidential directive used to authorize secret operations by the Central Intelligence Agency." The NYT says the administration "has inserted clandestine operatives into Libya to gather intelligence for military airstrikes and make contacts with rebels." No debate, no discussion, no Congressional vote -- the Emperor simply decrees it and thus shall it be. Speaking of which, TPM reports that Hillary Clinton has told Congress that Obama would ignore any Congressional act restraining U.S. military action in Libya as "an unconstitutional encroachment on executive power." Behold the Majestic Power of Article II: that's the stench of Change.

(2) McClatchy reports on how one key Libyan rebel leader spent the last 20 years: inside the U.S., living just minutes away from Langley, Virginia, also known as home base to the CIA. On a related note, Chris Sinnard, in comments, digs up some academic research on the attributes of the largely unknown Libyan rebels whom we're so valiantly defending . . . and possibly arming.

(3) Andrew Sullivan provides a long and thoughtful reply to the questions I asked yesterday about American exceptionalism, with a focus on Obama's actions in Libya (and though I don't agree with all of it, Adam Serwer's reply is well worth reading, too).