Grim reality of Libya war starts to set in

New discussions about arming the rebels may signal desperation on the part of the U.S. and its allies 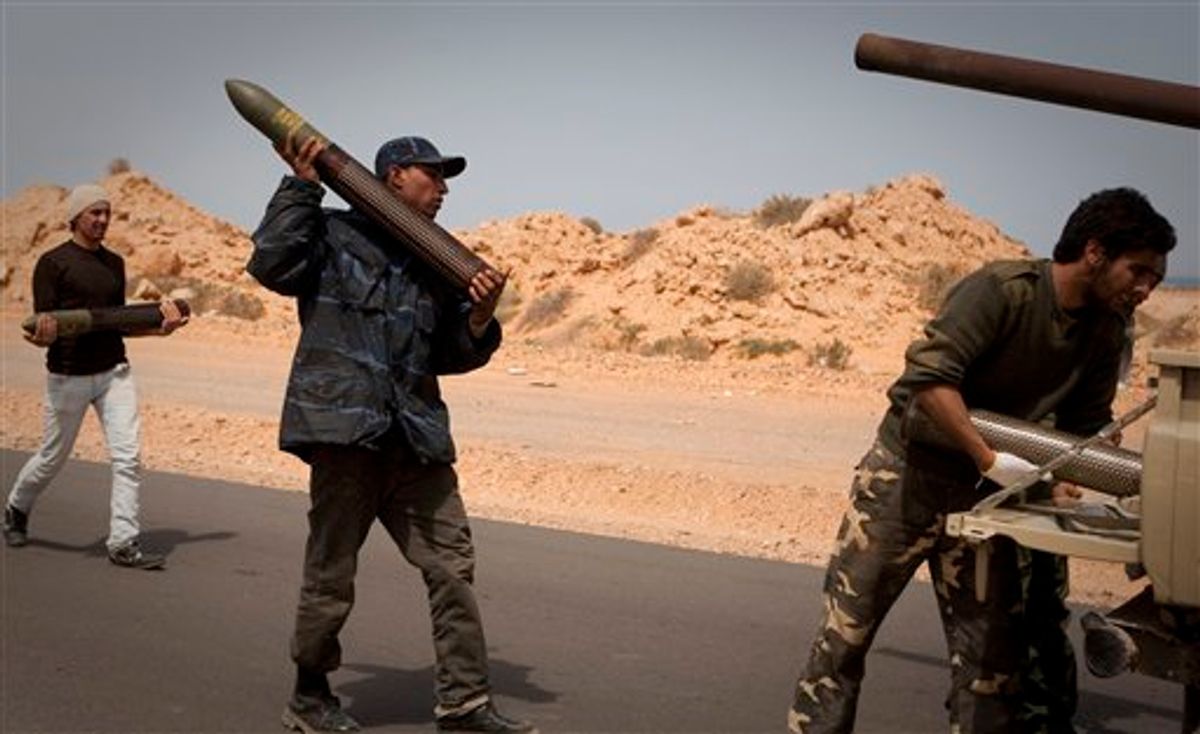 Libyan rebels load ammunition on the frontline outside of Bin Jawaad, 150 km east of Sirte, central Libya, Tuesday, March 29, 2011. Libyan government tanks and rockets blunted a rebel assault on Moammar Gadhafi's hometown of Sirte on Tuesday and drove back the ragtag army of irregulars, even as world leaders prepared to debate the country future in London. (AP Photo/Anja Niedringhaus) (AP)
--

I wrote on Monday about the legal issues raised by the prospect of arming the Libyan rebels despite a U.N. arms embargo covering the whole country.

Now, that question has become even more important as the discussions about sending weapons to the rebels -- even if the U.S., by its own admission, doesn't fully know who they are -- have taken on new intensity. The New York Times reports today in an above-the-fold front-page story:

The debate has drawn in the White House, the State Department and the Pentagon, these officials said, and has prompted an urgent call for intelligence about a ragtag band of rebels who are waging a town-by-town battle against Col. Muammar el-Qaddafi, from a base in eastern Libya long suspected of supplying terrorist recruits.

"Al Qaeda in that part of the country is obviously an issue," a senior official said.

Meanwhile, India and Russia have said that arming the rebels would be illegal, and NATO's secretary-general has said it will not send weapons. (A lot more background on these issues here.)

But perhaps the bigger takeaway from this new focus on the arming question is that the U.S. bombing campaign has failed -- so far -- to swiftly hand a total victory to the rebels over the Gadhafi regime.

Time's Tony Karon makes a convincing argument that this is a sign of desperation:

The rebels, in fact, appear unlikely to topple Gaddafi's regime without foreign military intervention on terms far more aggressive than those authorized by the U.N. Security Council. Even coalition air power has proved insufficient, thus far, to give Gaddafi's opponents a decisive edge when it comes to attacking regime-held towns as opposed to defending their own turf.

Arming the rebels, even if it were authorized, is an option that assumes a protracted war: It would take many months to get heavier weapons to the rebel forces, and for them to be trained to use them and organized into effective fighting units. Even then, that's a big if. It's plainly going to be extremely difficult holding together a coalition assembled to protect civilians if its operations include providing air support and weaponry to a rebel combatant force. After all, combatants are, by definition, not civilians, and nor are all of Libya's civilians in the rebel camp.

Who knows, maybe Gadhafi's military will turn on him and prevent a protracted conflict. But the U.S. government at this point is clearly planning for a long haul.