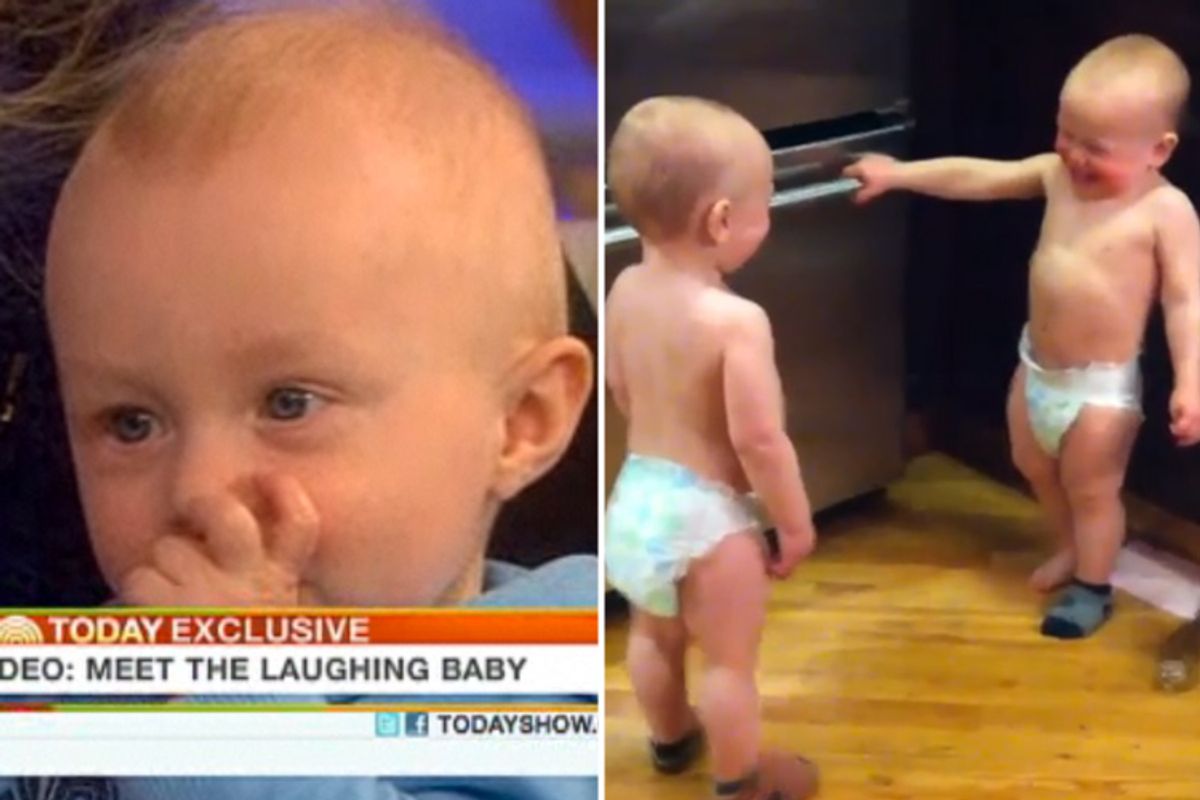 I'm worried about Matt Lauer. This morning, he and his "Today" show co-hosts devoted an entire segment to pondering what a pair of adorable 17-month-old twins could possibly be babbling about on YouTube. "Kids mimic each other," Lauer speculated, "and one finds it funny that the other is making the noises and then makes the same noises." The twins also merited a segment on "Good Morning America," where Robin Roberts lightly called the clip "the most talked about conversation in the world right now" before a segment featuring funny thought bubbles and subtitles. Why just watch stuff on YouTube, America, when you can watch Meredith Vieira or Robin Roberts watching stuff on YouTube? Right? Right? This is just getting sad.

Sure, adorable animals and cute babies have always been part of the news business. If it bleeds, it leads, but if it has big eyes and does something delightful, put it right before the weather. Sixty years ago, Matt Lauer's "Today" show predecessor Dave Garroway regularly shared billing with a monkey named J. Fred Muggs. But in the Internet era, network news have increasingly been scrambling for viewer attention, and jumping eagerly -- and indiscriminately -- on whatever the viral du jour is.

There's no question that some videos go viral because they introduce us to a fascinating character, or speak to something bubbling up in the culture. And when news outlets can bring depth and dimension to those stories, it can be powerful. This winter, "Today" savvily hopped right on the Ted Williams bandwagon, trotting out the homeless DJ with the "golden voice" -- not just interviewing him but putting him to work introducing the show. And they've followed up with him in subsequent interviews as he's braved the uneasy waters of sudden fame. Williams, with his years of media experience and his heart-tugging rise and fall saga, is a natural fit for television. He's a viral video who turned out to be a true human-interest story -- one with a voice smoother than a morning latte. Similarly, when "Good Morning America's" Andrea Channing scored a sit-down with Rebecca Black earlier this month, it turned the much-mocked young star of the "worst video in the world" into a sympathetic teenager. It even showed, when she crooned an acoustic version of the insidious "Friday," her potential to be entertaining.

But when you've got four hours of morning television to fill, or you're a 24-hours-a-day news network, it's not all going to be fascinating interviews with the Old Spice Man or in-depth explorations of the serious issues around school bullying. Often, it's going to be raccoons with their heads stuck in jars. It's going to be a bunch of CNN anchors sitting around watching a baby boggling at his mom's nose blowing, while something something whatever about the Libyan operation and the U.N. mandate and airstrikes appears on the crawl below. Sometimes, it's going to be a whole three-minute in-studio appearance on "Today" of a baby who enjoys watching his dad rip up a rejection letter.

Life is not all airstrikes and terror warnings and natural disasters. And in a world that offers much grimness, we need those balance-restoring laughing babies and puzzled kittens  -- especially before we've had our first flask of Wild Turkey of the day. But not all that goes viral is necessarily newsworthy. And there's something desperate -- and seriously irrelevant -- about a "Today" "exclusive" with "the laughing baby," or a segment on a clip that everyone with a computer can just watch for themselves on their friends' Facebook pages. There's no illumination there, just mindless presentation. A homeless DJ has a story. But a one-socked, diaper-clad toddler pretty much babbles for himself.