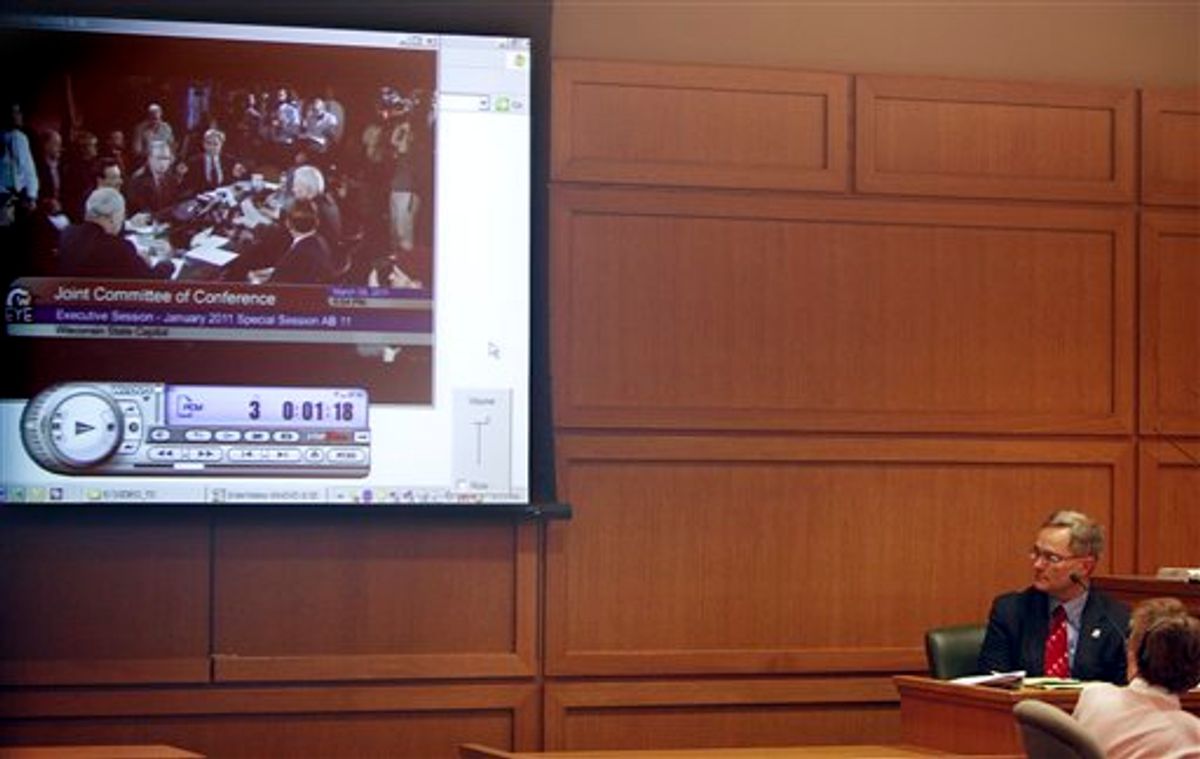 From the witness stand, Wisconsin Rep. Peter Barca (D-Kenosha) watches WisconsinEye Public Affairs Network footage of the March 9, 2011 Joint Committee of Conference entered into evidence during a hearing before Dane County Circuit Judge Maryann Sumi at the Dane County Courthouse in Madison, Wis., Tuesday, March 29, 2011. With Republican Gov. Scott Walker's administration insisting a new law eliminating most of state workers' collective bargaining rights had gone into effect and other state and municipal leaders disputing that, many were looking to today's court hearing for some kind of clarity. (AP Photo/Michael P. King, Pool) (AP)
--

Sumi's ruling came after Walker's administration ignored a restraining order she issued earlier this week saying work on the law should stop while she considers a lawsuit challenging the statute's legitimacy.

Walker officials had contended the order didn't apply to them because they weren't named as defendants in the lawsuit.

The law would require most public sector workers to contribute more to their health care and pensions, changes that amount to an average 8 percent pay cut. The measure also strips them of their right to collectively bargain any work conditions except wages.

Walker signed the proposal into law earlier this month after weeks of large pro-union protests in and around the state Capitol, prompting Democrats to file several lawsuits challenging its legitimacy.

Dane County District Attorney Ismael Ozanne filed a lawsuit alleging Republican legislative leaders violated the state's open meetings law in the run-up to a vote on the plan. Sumi issued an order blocking Secretary of State Doug La Follette from publishing the law, typically the last step before it can take effect while she considers the case.

But Republicans convinced another state office to publish the law online on Friday and declared the law took effect the following day. The state Department of Administration has begun preparations to start taking the deductions out of state workers' paychecks.

Sumi issued another restraining order on Tuesday after a day of testimony that reiterated her initial order. She warned anyone who violated it would face sanctions.

But state Justice Department attorneys and DOA Secretary Mike Huebsch said they didn't believe that order applied to the Walker administration since it wasn't named as a defendant in Ozanne's lawsuit. They continued work to implement the bill.

Early Thursday morning Sumi added the non-effect declaration to her restraining order clarifying that the law has not been published and is therefore not in effect. She is expected to take more testimony at a hearing on Friday.

A spokesman for Republican Assembly Speaker Jeff Fitzgerald said he had nothing new to say beyond his previous statement that he didn't believe the judge had the authority to interject herself into the affairs of the Legislature given the separation of powers.

A spokesman for Senate Majority Leader Scott Fitzgerald had no immediate comment.

The Legislature was scheduled to be in session Tuesday to pass other parts of Walker's plan to balance the current year's budget that faces a $137 million shortfall. There were no immediate plans to take up the collective bargaining piece again. The judge has said lawmakers could avoid the legal fight by passing it a second time, but legislative leaders have said they are confident it was done correctly the first time and it will prevail in court.

The law would require that about $30 million be saved by the state by July 1 through increased pension and health care contributions. If enactment of the law is delayed, the deductions from state workers would have to increase in order to get those savings by that time.