According to the majority leader, House Republicans don't need the Senate or the president to create new laws 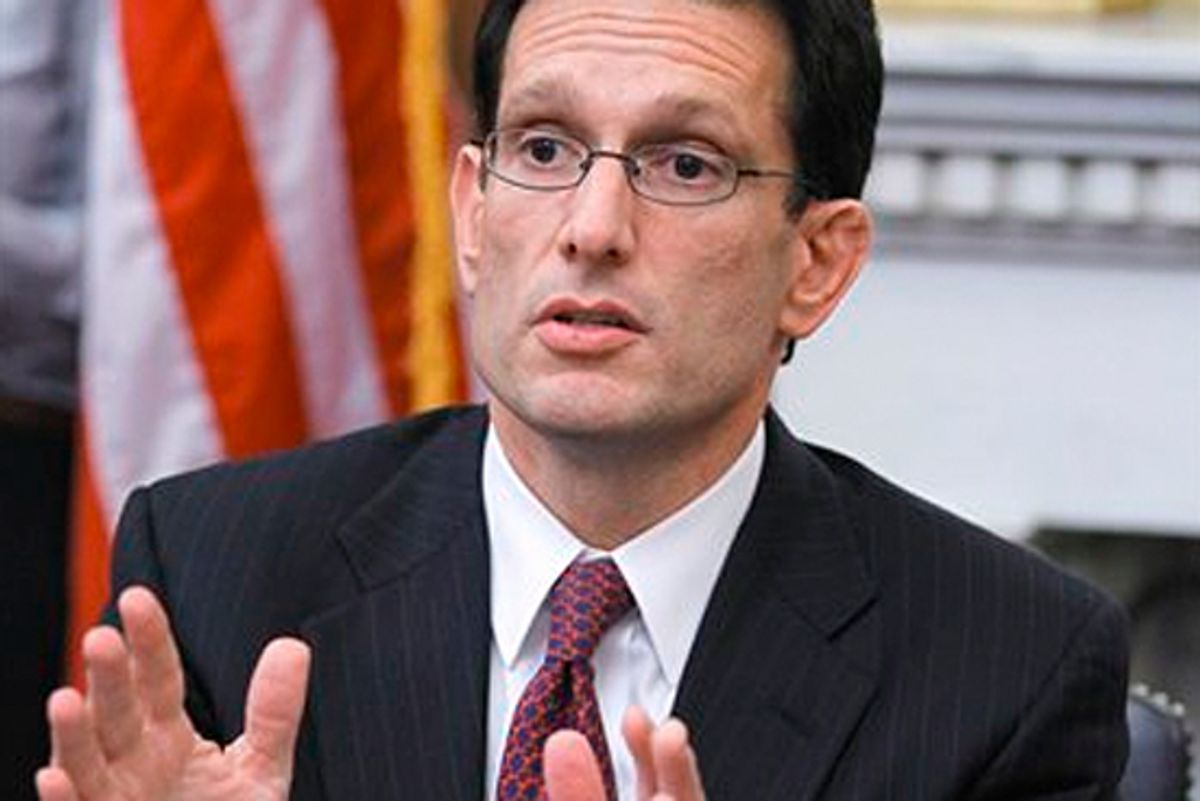 Vice President Joe Biden says Democrats and Republicans are close to a deal on the budget. Speaker of the House John Boehner says no, we're not. Blue Dog conservative Democrats and Nancy Pelosi are in agreement: Controversial political policy "riders" are going nowhere. But environmentalists are alarmed at an AP report citing a Democratic lawmaker's assertion that the EPA is going to get squashed.  And even as I write these words, a paltry band of Tea Partyers are holding a protest in Washington demanding that Republicans adhere to a no-compromise agenda.

With a week to go before the next shutdown deadline, confusion reigns, as usual. So please take any public statement by any politician, named or anonymous, with a freight train's worth of salt. But the award for most preposterous posturing has to go to Eric Cantor, the House majority leader, who announced on Wednesday that on Friday the House will vote on a "Government Shutdown Prevention Act."

"What this bill says is it reiterates again the deadline, and that the Senate should act before the deadline, and that's what the American people are expecting." House Majority Leader Eric Cantor (R-Va.) said Wednesday morning at a news conference with other House Republican leaders. "The bill then says if the Senate does not act, then H.R. 1 [the House-passed bill that cuts $61 billion] will be the law of the land. In addition to that, it says that if all else fails, and the Senate brings about a shutdown, then members should not get their pay."

One of the very first things that House Republicans did after winning the midterm elections was to install a new set of "rules" to govern House business. Among those rules was a requirement that each new bill "cite its specific constitutional authority."

It will be interesting to see whether Cantor bothers to follow this rule with the Government Shutdown Prevention Act. Because, according to the Constitution, for a bill to become "law of the land" it must be passed by both the Senate and the House and be signed by the president. Therefore, the Government Shutdown Prevention Act is unconstitutional, on its face.

True Tea Party patriots ought to be outraged.