The three biggest threats to the GOP brand

When it comes to public opinion, Republicans are their own worst enemy these days 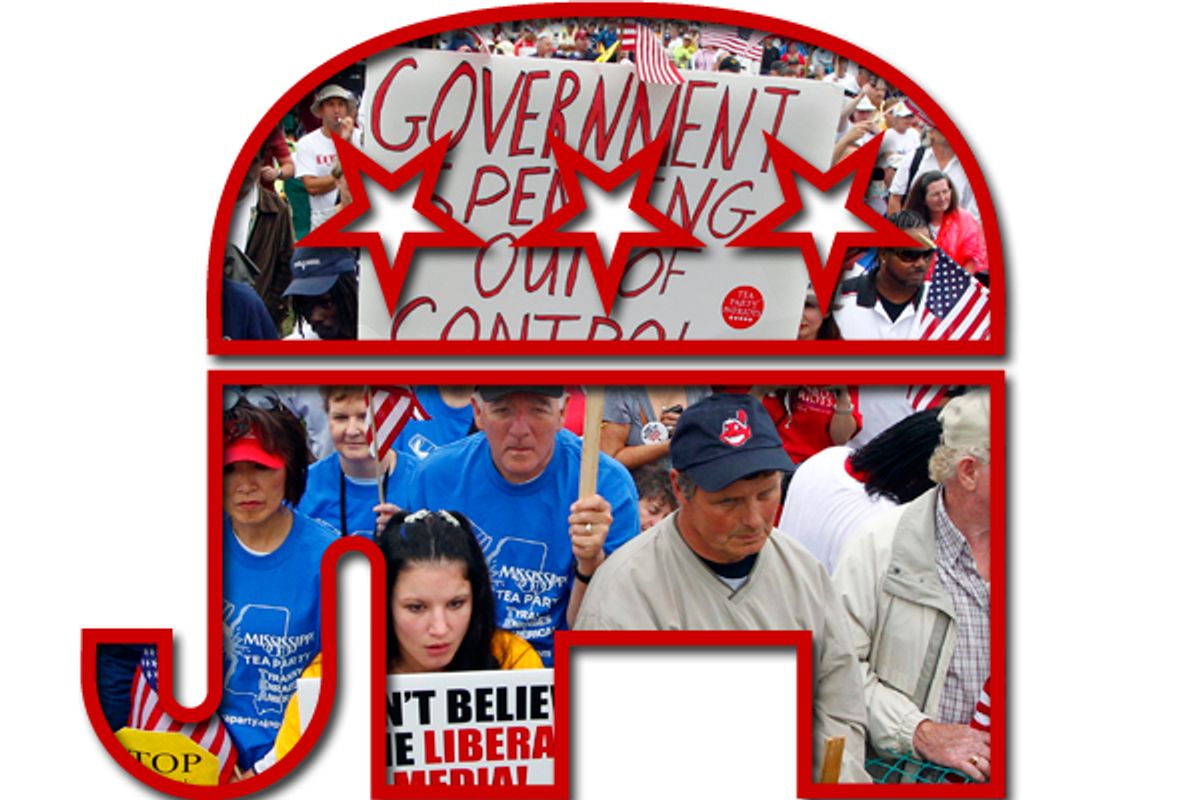 Republicans have been running the House for nearly three months now, and so far there really haven't been any major public relations disasters. To the Americans who even know who he is, Speaker John Boehner exists as a relatively generic character -- not that popular, not that unpopular, just someone whose name and face they periodically see in the news. So do the chamber's other GOP leaders (to the extent they register with voters at all).

From a P.R. standpoint, this is an improvement for the GOP over what happened the last time it won control of the House and was pitted against a Democratic president. Back then, Newt Gingrich quickly established himself as a profoundly unlikable public face for the revolution-minded House GOP -- an image problem that cost him and his fellow Republicans dearly when they forced a shutdown of the federal government in the fall of '95. At this point in his speakership, Gingrich's personal unfavorable ratings were approaching 50 percent. Today, Boehner's are about half of that, according to a Pew survey released last week.

This should be very good news for the GOP. When they posted their midterm landslide last fall, the biggest threat to the party's image, most observers assumed, would be a repeat of 1995, with Boehner and the House overreaching and turning off swing voters. But even though Boehner has proved a shrewder leader than Gingrich, the GOP brand is still in rough shape -- and it could soon get worse because of three factors:

1) A shutdown: House Republicans haven't officially overreached yet, but they may be in the process of doing so.

Rank-and-file members, many of them elected with Tea Party support last year, seem intent on using the April 8 expiration of the latest continuing resolution to draw a line in the sand over a series of Tea Party-friendly amendments (many of which have little to no impact on the budget): If the Democrats don't agree to them as part of a new spending plan, they'll refuse to fund the government.

And Boehner may have no choice but to go along with them, since championing a shutdown-averting compromise with the White House will inevitably prompt cries of "Treason!" from the true believers in the GOP conference -- true believers who could easily depose him in favor of Eric Cantor, the majority leader who is known to covet Boehner's post. Thus, the potential exists for Boehner to lead the House GOP into a shutdown in the next week  (or, if another C.R. is passed, a few weeks or a few months down the line) -- and for a shutdown to wound the Republican Party the same way it did 16 years ago.

2) The governors: This has been a surprising source of damage to the GOP brand. Newly elected Republican governors in Wisconsin (Scott Walker), Ohio (John Kasich) and Florida (Rick Scott) have all chosen to address their states' budget issues with devout, literal adherence to the Tea Party playbook. In terms of polling, the results have been catastrophic. A poll this week put Scott's approval rating at barely over 30 percent -- and Walker and Kasich are only faring a few statistically significant points better in their states.

Their struggles have the potential to spread across their state lines, if they haven't already done so. Walker's protracted fight over collective bargaining rights has been one of the biggest national stories of the past few months, with voters in and out of Wisconsin siding with Democrats and against the Republican governor. For the national GOP, the threat of this is that voters across the country are seeing Walker, Kasich and Scott not as individual state governors waging provincial fights but as the faces of Tea Party governance in America. This is a far cry from 1995, when national Republicans aggressively promoted many of their governors as innovative problem-solvers.

3) The Tea Party itself: The movement -- which is really just a synonym for the Republican Party base -- was in some ways a source of strength for the GOP last year, in that it helped to inspire and activate previously dejected Republicans. It was also a liability, in that Tea Party activists propelled utterly unelectable candidates to GOP nominations for several important Senate and gubernatorial contests.

But now, as many of its members gather in Washington for their latest rally, the Tea Party has become a clear liability for the GOP: In the past 12 months, the number of Americans expressing a negative view of the movement has increased by 21 points, a survey released Wednesday found. This can partly be chalked up to the negative press the movement has received thanks to the often zany and extreme-seeming antics of its supporters. That it is now associated with some unpopular leaders and governing decisions is surely a factor, too.

In fact, you can argue that all three of the above threats to the GOP label should be condensed under the Tea Party label. After all, if a shutdown does happen, it will be because Boehner was unable or unwilling to cut a deal thanks to pressure from House Republicans who were either elected last year with Tea Party support or who fear the Tea Party's wrath (or both). And Walker and Scott both won their gubernatorial primaries last year with considerable Tea Party support; Scott, in fact, overcame a fierce effort from the party establishment to deny him the nod. Without the Tea Party, the national Republican brand would probably not now be burdened with the P.R. problems that these governors have caused.