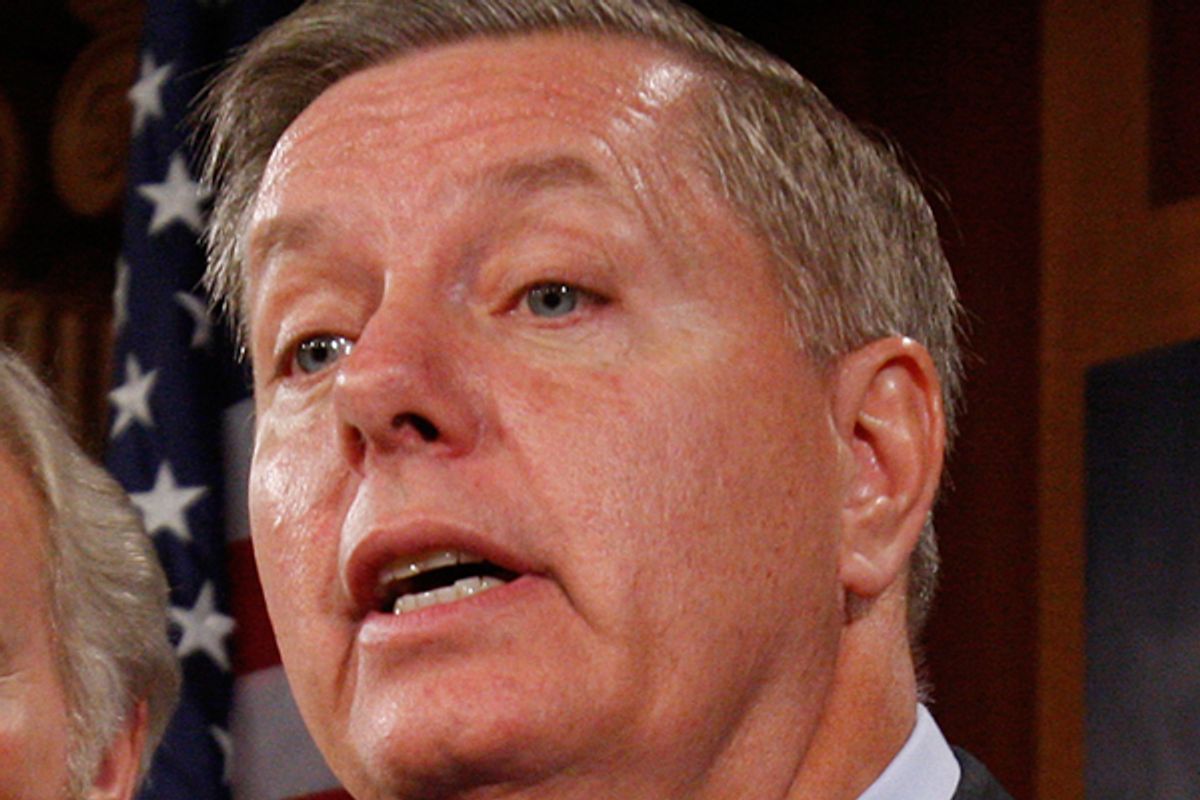 We previously identified a bout of amnesia experienced by John McCain, who has consistently said that the U.S. must take out Moammar Gadhafi because he has "American blood on his hands" even though McCain himself was cozying up to Gadhafi just 18 months ago on a visit to Tripoli.

Today, Sen. Lindsey Graham (R-SC), who accompanied McCain on that August 2009 trip to Libya, flashed a similar bit of amnesia. Like McCain, he invoked Gadhafi's support for terrorism in the 1980s -- including the 1988 Lockerbie bombing, which killed dozens of Americans -- as a reason the U.S. should now "drop a bomb on him."

This was during a hearing of the Senate Armed Services Committee, where Secretary of Defense Bob Gates was testifying. Here's the exchange (see the video here, starting around the 98:30 mark):

GRAHAM: Is Gadhafi the legitimate leader of the Libyan people in your eyes, legally? And if he's not, would it be unlawful for a nation including ours to drop a bomb on him, to end this thing?

GRAHAM: Well that doesn't mean we shouldn't try again. I'm asking this in all seriousness. I don't believe this man is the legitimate leader of the Libyan people. I believe he's an international terrorist, unlawful enemy combatant, then we're within our bounds as a nation -- and our coalition partners -- to take the fight to him and his cadre of supporters. Is that on the table or not?

GATES: I don't think so because I think it would probably break the coalition.

Again, the argument that the U.S. should kill Gadhafi because he supported terrorism ignores the past decade of improving ties between the U.S. government and Libya, which included high-profile visits from members of the Bush administration and a deal in which Libya paid money to families of Lockerbie victims. Graham himself should know this, given his meeting with Gadhafi in 2009.

According to a WikiLeaks cable describing the meeting, Graham was on board with improving ties -- and even helping send Libya military equipment -- with this "international terrorist":

Senators McCain and Graham conveyed the U.S. interest in continuing the progress of the bilateral relationship and pledged to try to resolve the C130 issue with Congress and Defense Secretary Gates.

And here's video of Graham shaking Gadhafi's hand back in 2009:

There might be an argument for dropping a bomb on Gadhafi (though the legality of such a move is another question), but it has nothing to do with his support for terrorism in the 1980s.