Interpreting the plot of Katy Perry and Kanye West's "E.T."

The new music video from Mrs. Russell Brand is kind of confusing. We're here to help 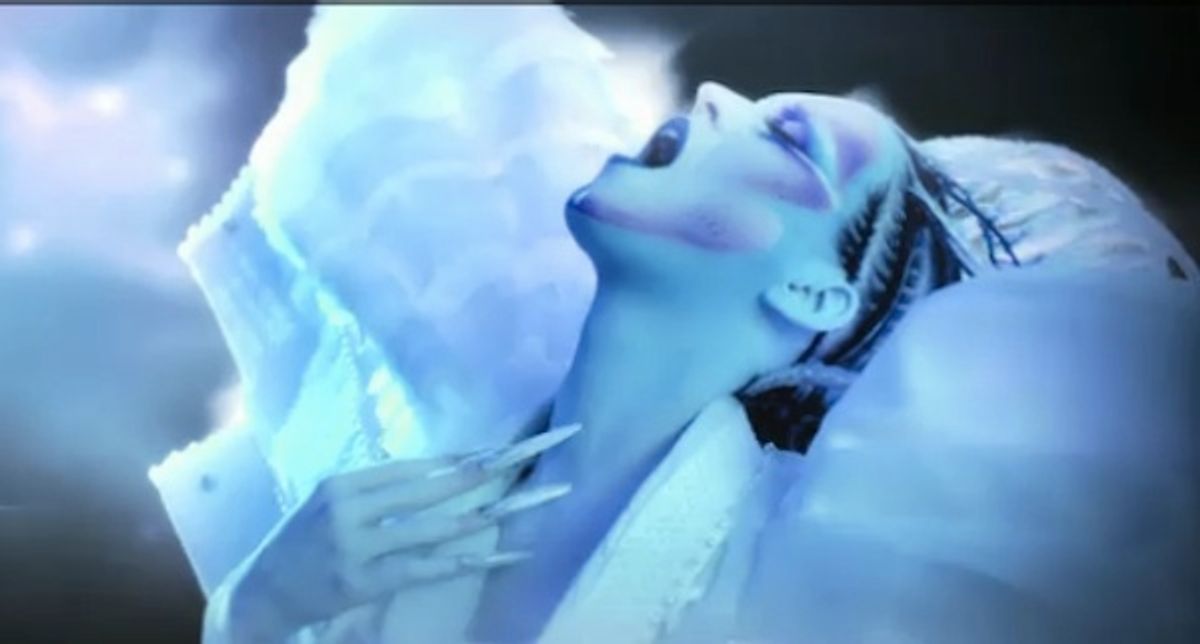 The first mistake you can make while watching the music video for the Katy Perry's song "E.T." (featuring Kanye West) is thinking that it has anything to do with Steven Spielberg's 1984 film of the same name. It doesn’t. There are approximately zero Reese's Pieces featured here, and also a suspicious lack of both flying bicycles and Drew Barrymore. In fact, it's kind of ambiguous who or what the aliens are in this little vignette by Floria Sigismondi, who also directed "The Runaways." Here's our best guess.

Okay, so: Katy Perry is floating in space, changing her outfits and stuff and looking kind of terrifying. She and Britney Spears apparently swapped manicure tips while Britney was flying by in her own alien spaceship from the "Hold It Against Me" video, because Katy's are hella long. She sings about kissing her with your poison and infecting her, and she has a line that is definitely "Boy, you're so alien." So Katy isn't an alien. Or is she?!

Eventually she reaches a planet that is like a sadder, non-Pixar version of the one from "Wall-E." There she meets a robot, and inside the robot is a floating Kanye West, singing about bars on Mars, because he's got a friend there who is a bouncer and can totally get robot Kanye and Avatar Katy (Oh yeah, Katy now looks less like a freaky drag queen and more like one of the N'avi with those weird marks on her face) in after 11.

Katy is very impressed by this news. She makes out (as best she can), with the robot with a television screen for a face…a possible metaphor for modern consumerist culture? They have that bright beam from "The Fifth Element" come down to engulf them, and the robot/alien is revealed to be an albino African (or African-American, although it's a post-apocalyptic society and this guy was just a robot, so I don't really think he's bugging out too much about his nationality). Katy Perry reaches down and finds a pair of sunglasses, because the one nice thing about being around after the fall of capitalism is that there is just free shit, everywhere.

Katy undoes her dress (sexy!!) and we see she has deer hooves for legs, which I guess reveals that she's the alien? Although the fact that she crash-landed on a planet and can change her genetic makeup at will (mostly grooming purposes though) kind of tipped us off. Katy the alien and her new albino boyfriend walk/trot off into the scorching sun of their new home planet.

Kanye West is left floating around in darkness, wondering if anyone is still planning on going to that club on Mars later.