"The Killing": A murder mystery with brains and soul

AMC's mystery show, "The Killing," tells the heart-wrenching story of a violent crime in the Pacific Northwest 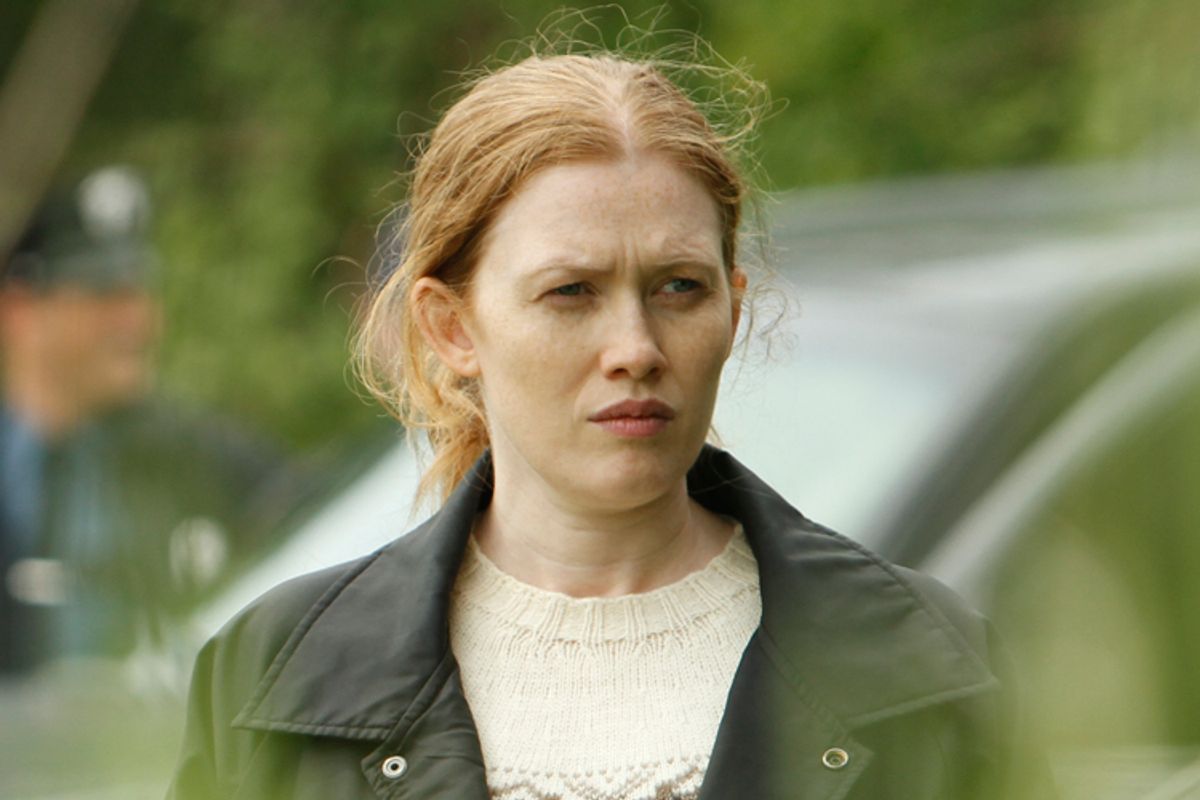 It's impossible to watch the opening moments of AMC's new series "The Killing" (Sundays at 9 p.m./8 Central, starting April 3) without thinking of David Lynch and Mark Frost's groundbreaking "Twin Peaks." It's not just the Pacific Northwest setting, perpetually overcast skies and rumbling synth chords that spark a trip down memory lane; it's the series' patient way of telling a story. This account of a single murder investigation in Seattle never sprints when it can amble. As adapted, produced and written for the screen by Veena Sud (executive producer of "Cold Case"), it's a subtle piece of work. It's quiet, sometimes hushed, as if the filmmakers were superstitious travelers taking a shortcut through a graveyard and being careful not to step on hallowed ground.

The show's tone is set by its leading character, homicide detective Sarah Linden (Mirielle Enos of "Big Love"). She's a divorced single mom who's just accepted an out-of-state job and her boyfriend's marriage proposal; she meant to leave Seattle and its killings behind, but ended up getting pulled in by one last case, the apparent murder of a high school student named Rosie Larsen. Sarah is a walking rebuke to the spunky-and-talkative female crime-fighters that currently rule TV; her dogged commitment to her job and its devastating effect on her romantic life reminded me of "Prime Suspect" so strongly that I wonder if "The Killing" will  make the proposed American remake redundant. As played by Enos, Sarah is a creature of intellect with a powerful moral compass. She's also spookily quiet, with a placid face and the kind of eyes you don't dare lie to. She agrees to do preliminary work on the case only because her commanding officer asked her, and because her replacement, a former undercover cop named Stephen Holder (Joel Kinnaman), seems like an immature macho doofus. But in one of many pleasurable reversals, Holder proves different from but potentially equal to Sarah, using his hipster white-boy slang and Alpha Male Dude energy to warm up witnesses chilled by Sarah's frosty stare.

Although Sarah and Stephen are the show's anchors, "The Killing" divides its energy almost equally between other, parallel stories. One concerns the effect of the murder on Rosie's family: her mother, Mitch (Michelle Forbes, so excellent on "True Blood" and NBC's "Homicide"); her father, Stanley (Brent Sexton), and her younger brothers. This part of the story is agonizing. You know what's coming because you saw the body before the family did, but the countdown to the revelation is somehow worse because of this -- suspenseful rather than merely surprising. It's all about how Mitch and Stanley will react to the news, and how they'll disseminate it to their kids, relatives and friends.

The other plotline concentrates on Seattle city councilman Darren Richmond (Billy Campbell), who's running for mayor in a tight race. When the detectives inform Darren that Rosie's body was found in the back of a Team Richmond campaign van, he and his chief advisor and secret lover Gwen Eaton (Kristin Lehman) instantly interpret the news in political terms. They seem appallingly indifferent to the human tragedy. To them it's all about poll numbers and media impressions; they have to remind themselves that murder is not an abstraction, and that this crime will have repercussions far beyond election season.

Did Darren have anything to do with Rosie's death? The way Campbell plays him, it's impossible to say. He's affable but cagey, and thus 100 percent believable as a gifted politician.

I've liked Campbell ever since he showed a darker side of his talent portraying Jennifer Lopez's abusive husband in "Enough" and navigating the darker passages of ABC's domestic drama "Once and Again." There's a melancholy tinge to Campbell's action figure face, along with hints of buried rage. When his "Once and Again" character Rick Sammler was at his most self-pitying and resentful, Campbell communicated an unnerving level of hostility; when other characters read Rick the riot act, he looked as if he was picturing nooses around their necks, or around his own.

All those qualities come to the forefront here. Darren Richmond is a fascinating character, at once warm, charming, expedient and fundamentally unreadable; all this makes him an ideal counterpart (adversary?) to Sarah, a blank slate with a badge. When the two finally have a tense face-to-face confrontation near the end of Sunday's two-hour pilot, it's like a poker table showdown between master bluffers. I can't wait for the moment when Sarah gets this elusive character in an interrogation room and tries to slip inside his head. What will she find there? Pure evil? Or nothing at all?

"The Killing" is a limited run, 13-part series, adapted from a popular Danish show that's currently being remade in several countries. I haven't seen the original, so I can't compare it to this one. But I can say with confidence that this American version feels less like a U.S. broadcast series, or even a homegrown cable show, than an import.

What kind of import, though? Danish filmmakers were hugely influenced by David Lynch, "Twin Peaks" especially. Lynch's mix of mordant humor, surreal imagery and gruesome violence might have appealed to the Northern European temperament, and that region's filmmakers showed their appreciation by producing a number of very Lynchian movies and TV series. The most ambitious were probably Lars von Trier's "The Kingdom" and "The Kingdom Part 2," which were in turn remade as the short-lived ABC series "Kingdom Hospital." But "The Killing" is more immediate than any of its forebears -- a procedural rooted in physical and emotional specifics. There are suggestions of a world beyond this one; the helicopter shots over jumbled cityscapes and lush countrysides have an otherworldly feel, as if we're seeing through the eyes of an angel of death, or a vulture. But for the most part it's an earthbound show, one that's unusually attentive to tiny details of body language, clothing and decor. The way a person looks at another person is often more important than what he's saying, and there are moments when you find yourself thinking like a detective, scanning the wide, densely packed frames for hints of where this engrossing drama might go next.

Our Picks Television The Killing Tv