Pick of the week: Jake Gyllenhaal in the cool, romantic "Source Code" 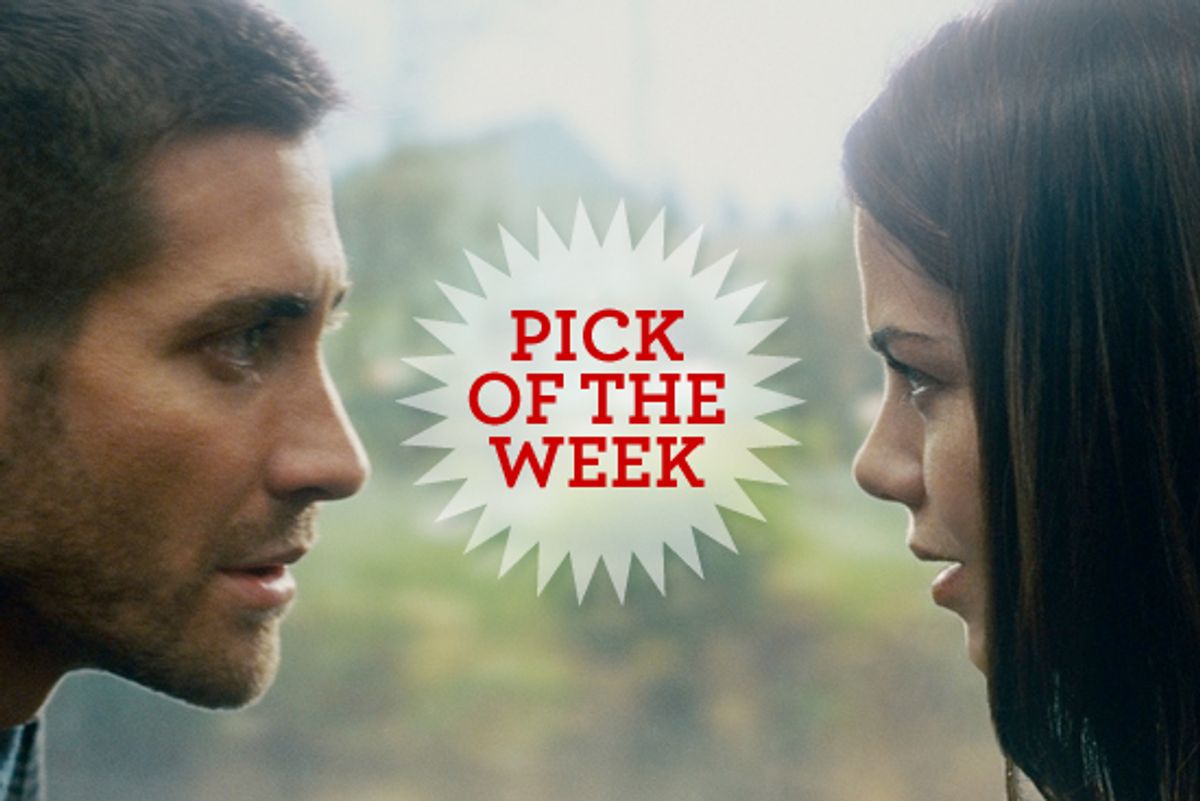 Near the beginning of Duncan Jones' surprisingly human techno-thriller "Source Code," we see an aerial tracking shot moving across some Midwestern woods and a lake, where we see a flock of geese accelerating toward takeoff: Whoppa-whoppa-whoppa. It's just a few seconds of dazzling outdoor color, perhaps artificially enriched, in a tick-tock puzzler that mostly takes place in enclosed spaces, but it's a nice little metaphor too: The geese are about to take off, and so's the movie. We also have no idea, the first time we see those geese, how well we'll get to know them and how much affection we'll feel for them before the whole thing is over.

That shot ends by locating a commuter train on its way to Chicago, which is where an Air Force helicopter pilot named Colter Stevens (Jake Gyllenhaal) wakes up disoriented, unsure where he is or how he got there, let alone why the pretty young woman sitting across from him (Michelle Monaghan) keeps calling him "Sean." By the time Stevens works out some basic facts about his situation, including the startling discovery that the face he sees in the bathroom mirror isn't his own (although it matches the ID in his wallet, which belongs to a high school teacher named Sean Fentress), a huge explosion rips through the train, obliterating him and Monaghan's character and a whole lot of other people. (Summit Entertainment has posted the first five minutes of "Source Code" on YouTube, and it's among the better teasers of recent memory.)

When Stevens wakes up again, he's upside down, strapped into some kind of decrepit metal space capsule, with an all-business female officer (it's the ever-terrific Vera Farmiga, working wonders with a role that could have been nothing) talking to him through a low-quality video connection, apparently from a base code-named Beleaguered Castle. She's able to use some "Manchurian Candidate"-style tricks -- a sequence of playing cards, a story containing code words -- to reorient him a little bit, and urges him to go right back into the simulation or training exercise or whatever it is and try to find the bomb and the bomber. Waging an internal battle between military discipline and simple human confusion, Stevens demands to be briefed: Why can't he remember anything since his last mission over Afghanistan? Has he been evacuated to the United States? When can he call his dad? What and where is this creaky vessel that seems to be leaking hydraulic fluid?

Eventually those questions will be answered, but not here of course. Spoiler warning: I won't go beyond the first set of plot revelations, those widely available in the film's publicity campaign. If you've avoided those and want to continue to do so, please step away from the Internet, sir. The double mystery in "Source Code" is deftly handled by Jones (who also made the intriguing sci-fi indie "Moon," and is pre-famous as the son of rock legend David Bowie) and screenwriter Ben Ripley, who forge an interlocking double helix of discoveries as Stevens relives the train bombing, "Groundhog Day" style, over and over again. Despite warnings from Goodwin (that's Farmiga's icy officer, who does warm up a little) and her twitchy, Strangelove-esque boss, Dr. Rutledge (Jeffrey Wright), Stevens begins to use his eight-minute sessions aboard the doomed train to learn what he can about his own fate, as well as to sort through the clues and characters around him: the grouchy stand-up comic, the college student, the older woman with the tote bag from a military hospital, the douchey guy with the Bluetooth headset and the rest of them.

Stevens runs through his "mission" at least six times, in fact -- not counting the ones that speed by in tiny fragments -- and each one is a little different. Not just because he pursues different threads of the story each time, discovering where the bomb is planted or harassing a Middle Eastern-looking guy in a suit (innocent, of course) or stealing a gun or making unauthorized phone calls to the Air Force, but because he gets to know his role as Sean Fentress a little better, and pays more attention to the winsome Christina (Monaghan), who has evidently been waiting a while for Sean to make his move. If the science behind what's going on in the super-secret time-travel and/or astral projection project at Beleaguered Castle is almost pure hokum, there's just enough pop physics, and more than enough real human psychology, to lend this intriguing popcorn movie some depth.

Jones keeps the plot mechanics whirring on at least three levels, if not four (once you count Stevens-as-Sean's burgeoning romance with Christina and Stevens' subtly shifting video relationship with Goodwin), which may distract you from some of the film's odder strengths and liabilities. Goodwin and Rutledge keep exhorting Stevens not to overthink his situation, and they may as well be addressing the audience, since I'm not sure suspension of disbelief can cover all the logical and philosophical fallacies embedded into this "Quantum Leap"-style yarn. Still, I agree with them: That's not the point.

Ingeniously, Ripley and Jones withhold nearly all the canned characterization or "relatable" back-story material you'd expect from a conventional Hollywood thriller. Everything we learn about Stevens and Christina and Goodwin by the end of the film comes from their actions, not their words. That lends "Source Code" an elusive, almost arty shimmer beneath its glossy, action-movie surface. I suspect it will play well on repeat viewings despite (or possibly because of) its unsolvable plot koans. Gyllenhaal begins the movie playing Stevens as a clean, controlled, masculine Hitchcock-type hero, engaged in an individual struggle against the cruel machineries of God. By the end of "Source Code" he's become a different kind of hero, one who has stepped out of time for a moment and gotten a glimpse behind the curtain of existence, à la, I don't know, Dave Bowman in "2001: A Space Odyssey" or a Zen master or something. He has learned what we all already know but have trouble remembering, that all we ever have is right now: Someone spilling Coke on our shoe, a girl to kiss on a train, the sight and sound of geese taking off from water.