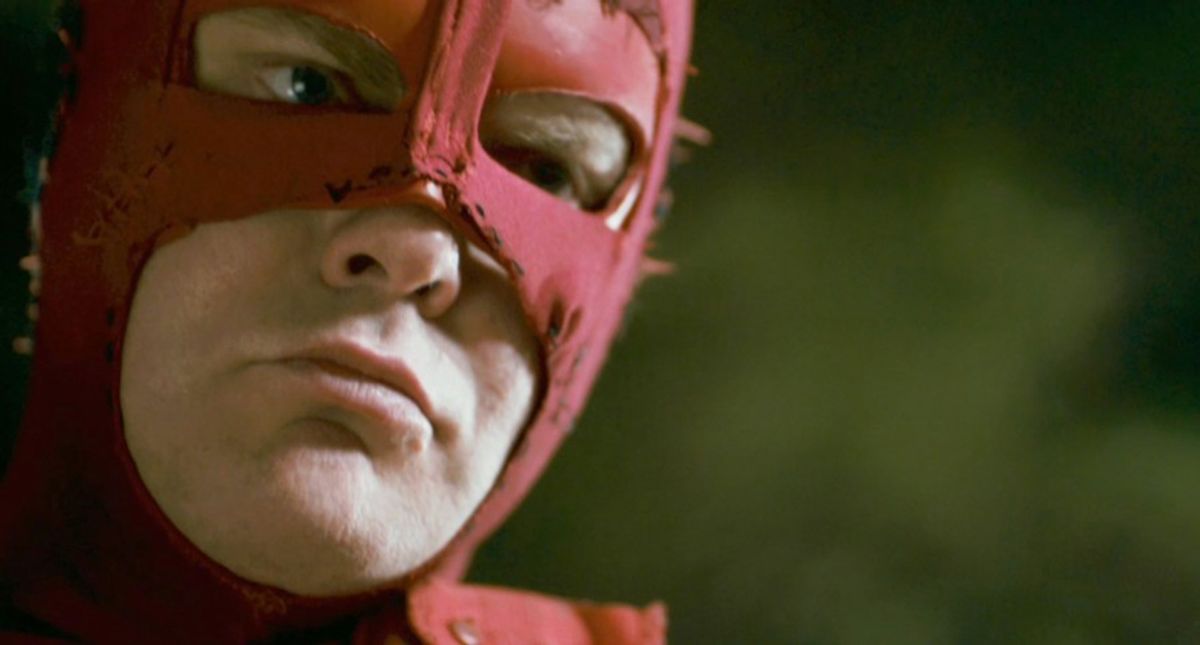 Since I'm not quite sure what to say about writer-director James Gunn's "Super" -- except that it seems to be a superhero movie made by, for and about people with severe mental illness -- let's retreat into the high-walled castle of film theory for a minute. We seem to be witnessing the second coming of the avant-garde in indie film at the moment, which isn't necessarily something I expected to encounter in the remainder of my movie-reviewing career. Maybe it's the beginning of a backlash against the naturalistic tone and minimalist manner of so much American independent cinema in the 2000s, and maybe it's just a coincidence. But the indescribably bizarre "Super" is opening the same week as Quentin Dupieux's "Rubber," which manifests as an imitation late-'70s roadsploitation thriller but is actually much closer in spirit to the self-detonating films of Jean-Luc Godard.

If "Super" doesn't have the art-school pedigree or the audience-poisoning aspirations of "Rubber," it's still a movie Godard would appreciate, in that it resolutely refuses to stick with a style or mood and is destined to provoke hostility in many people who see it unawares. Inescapably, many viewers will draw comparisons between "Super" and "Kick-Ass," last year's much-pilloried superhero spoof, but beyond the basic premise they aren't all that similar. "Kick-Ass" is pretty much "That's Entertainment" compared to Gunn's film, which is a lot dirtier, a lot crazier, a lot more devoted to a late-'80s vision of alterna-culture and a whole lot less eager to please.

Gunn has described "Super" as an adaptation of William James' "The Varieties of Religious Experience," complete with superhero costumes and comic violence, and he's not kidding about that nearly as much as you'd think. Another way of translating it might be to say that Gunn has taken the loser-hipster characters from "Ghost World" and transported them into the splatterific, grade-C genre universe of Troma Films. (The comparison isn't random; Gunn wrote the screenplay for "Tromeo & Juliet," infamously earning $150 for his work, before moving on to the "Scooby-Doo" live-action films of the early 2000s.)

"Super" stars Rainn Wilson (best known as Dwight from TV's "The Office") as Frank, a hapless fry cook in some nameless, R. Crumb-style Middle American city. Frank's one implausible stroke of luck is that he wound up married to Sarah (Liv Tyler), a recovering addict and sometime stripper who sees him as an antidote to all the lamentable guys in her past. But Sarah has been spirited away by a pseudo-suave drug-dealing lowlife called Jacques (Kevin Bacon, giving an ur-Kevin Bacon performance), who takes a half-sinister, half-benevolent interest in Frank, at least before he orders his minions to beat the crap out of him.

"God has graced you with a goddamn egg-cooking gift," Jacques tells Frank, and that's not the only mention of the deity in this motion picture. Frank discerns messages aimed at him from within a fourth-rate Christian superhero show called "The Holy Avenger," and receives a highly disturbing personal visitation from the Almighty, which I shouldn't spoil for you except to say that it's the first and most startling of several special-effects eruptions amid this deliberately lo-fi motion picture. (Think tentacles.) This divine intervention leads Frank to buy some red fabric, learn to sew and reinvent himself as the Crimson Bolt, a deranged crime-fighter who wreaks vengeance on Jacques and his ilk. And on yuppies who cut in line at the movies. By beating them half to death with a monkey wrench.

And did I mention his dangerously crazy nympho sidekick? Yeah, in case we don't think that slow-burning, chronically unhappy Frank, with his ridiculous costume, his outbursts of unearned violence against random strangers and his stupid catchphrase -- "Shut up, crime!" -- is enough of a nutjob, there's always his sidekick. That would be Libby (Ellen Page), the comic-store geek-girl who figures out the Crimson Bolt's secret identity and nominates herself as Boltie, his "kid sidekick" and potential sex partner. (Frank is horrified; he is a married man, albeit a cuckolded one.) Gunn seems to have conceived of Libby as a challenge, or a series of challenges, and Page embraces them with overamped gusto: Can a small, pretty young woman be presented not just as an Asperger-like misfit prone to inappropriate outbursts and a sexual aggressor but also as a borderline sociopath?

Like the apparently psychotic Frank and the Holy Avenger and Bacon's odious Jacques and the whole damn movie, Page's character is funny until she is really, really not funny (and then she gets funny again, maybe, on the other side of that). She hangs out the window of the Crimson Bolt's 1980s American beater, shouting to the crowd: "Any time some stupid motherfucker wants to commit some gay-ass crime, you tell them ..." But she doesn't quite finish the thought, because Frank can't get the car started, and the guy whose legs they've just crushed against a wall is lying on the hood, screaming in pain, maimed or dying.

It's a fatally miscellaneous scene in a movie that shifts from farce to grotesque to melodrama to straight-to-video action flick, without pretending to make sense or reassuring us that we're having a good time. I think "Super" is occasionally brilliant, sometimes awful and terribly confusing overall; this movie reminds me of an old Irish joke about the ancient and terrifying housekeeper who asks the young priest whether he enjoyed his egg. ("In parts," he says nervously.) Is it destined to be a cult movie of the future? Maybe, if such things are still possible. Is it a genuine upwelling of id-fueled American insanity? Same answer.

"Super" opens April 1 in New York, Los Angeles and other major cities, with wider release to follow. It will be available on-demand, beginning April 13, from many cable and satellite providers.