I panicked when I got his friend request, but the distance of online communication has actually brought us closer 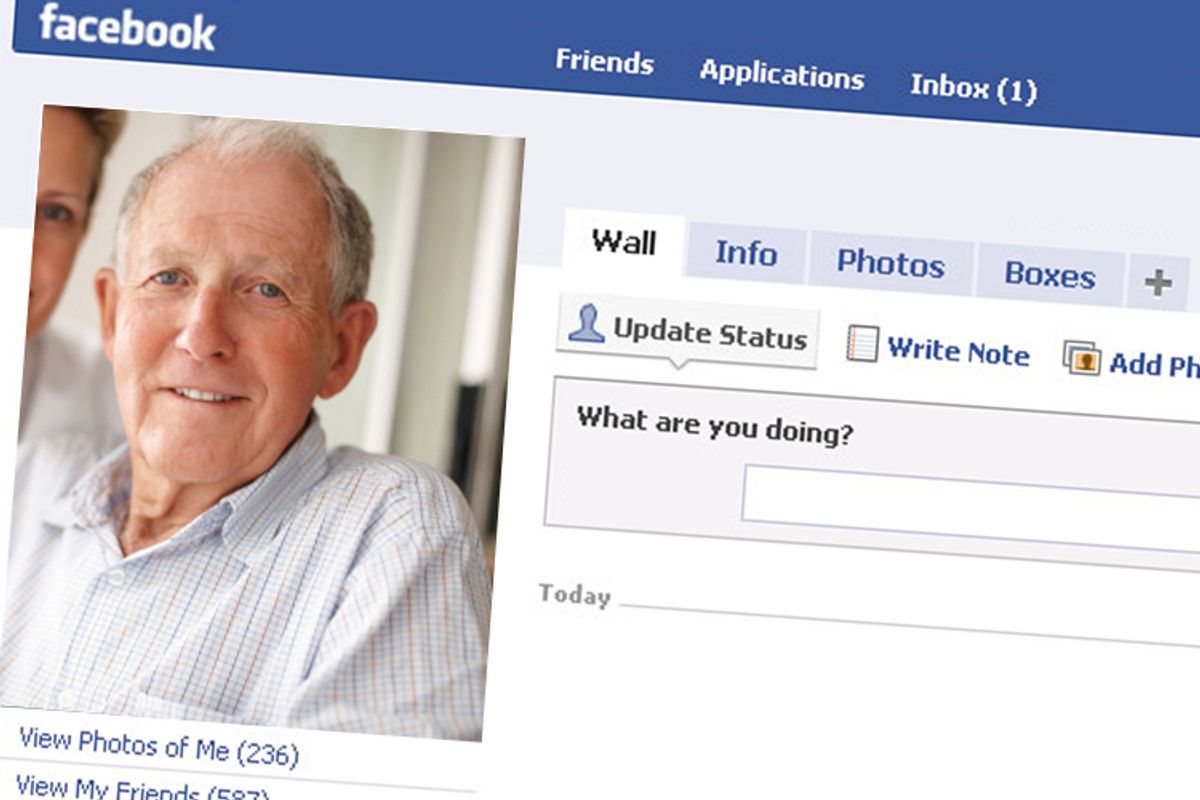 My father comes from a generation of men -- perhaps the last -- for whom expressing affection towards their children, particularly children of the same sex, can be awkward. I'm sure this has something to do with evolving gender roles and what it means to "be a man." For my dad's generation -- the early baby boomers -- being a man meant providing a family with essentials, not emoting all over the place. Men were to be sturdy and stoic, not soft and sensitive.

I also get the impression that my dad wasn't too close to his parents. His mother seemed distant, his father eccentric -- neither the personification of affection. When I think back to my father's interactions with his parents before they passed, words like "cordial" and "businesslike" come to mind. He was kind to them because he's a kind person, but I never got the impression that he was maintaining fulfilling relationships. In light of that, I'm surprised he even knew how to express affection to my brother and me.

That doesn't mean my dad never showed his love for us when we were growing up. I can recall countless acts he performed to express his affection. When he would take a day off from work, for example, he would spend it ironing our clothes and cooking dinner. My brother and I didn't care if our clothes were ironed, but I knew that was my dad's way of saying that he loved us. Who, after all, takes off from work to iron Nike T-shirts and prepare roast chicken in garlic gravy?

But I could probably count the number of times my father has told me he loves me on my 20 digits, and that's simply no big deal to me. I've never once thought that he doesn't; I've just always known that some things are easy to feel but harder to say. There have been many times, in fact, when I have wanted to tell my dad I love him but have felt that it would be too awkward to do so. Guys can be funny that way.

So when I received a Facebook friend request from my dad, I was, frankly, weirded out. I've been accustomed to keeping my dad close, but not too close. Sunday night dinner? Sure. Friday night pub crawl? No, thanks. By accepting his request, I would give my dad insight into my entire life: my interactions with friends, my comings and goings, my random thoughts, my likes, my dislikes, what I "like" and "unlike," the random compliments I give my girlfriend. This simple request felt more like an invasion.

And yet, I knew I had no option but to "friend" my dad. What conceivable excuse could I have to not? Before I clicked "accept," though, I scrolled through my posts and photos to "clean up" my profile. I even thought about starting a whole new profile for friends and keeping the one I had for people like my dad and my boss -- people for whom I reserve the persona that, otherwise, only comes out when I attend Mass every few years.

In the end, I let my dad simply be like any other Facebook friend because, well, he's my dad. But at first I wasn't sure how to virtually interact with him. I was even scared to look at his profile. Would he post creepy photos of him and my mom drinking martinis and standing too close to one another at creepy parties for creepy people of their age?  Would he have bizarre, unacceptable interests like scrap-booking or watching "American Idol"? Would he be socially awkward, posting head-scratching comments on other people's posts?

All the worrying was for naught. My dad, as it turns out, is completely normal. What's more, accepting his friend request has allowed us to communicate more than we ever have before. While I've always talked to my mother on a daily basis, neither my dad nor I have ever felt comfortable just picking up the phone and diving into conversation.

But, on my Facebook page, my dad suddenly started showing interest in my life: complimenting me on accomplishments, posting comments on my posts, taking notice of the things that make up my life. Somehow, the inherent distance of online communication allowed him to express affection in ways that are too awkward in person, and has given us things to talk about in our face-to-face interactions.

One day, for example, he commented about my blog; he hadn't previously realized that I spend many evenings in front of the computer. "I like your blog," he told me. "I didn't know you blogged. Is there a way for me to add it to my favorites?  I really like your articles." And just yesterday he complimented me about a piece I wrote for an online magazine. No matter how old you are, hearing your father express interest in your interests is flattering. And if he weren't my Facebook friend, he might never have known about my writing pursuits.

I've also learned a lot about my dad because of our newfound "friendship." Through his Facebook page, he has revealed an astute sense of humor I never knew he possessed. One night, my girlfriend and I couldn't stop cracking up at his profile picture: a shot of him sitting on a toilet in the middle of a driveway, scarf wrapped around his neck and stocking cap on his head, posed like Rodin's "The Thinker." Why was a toilet in the middle of a driveway? What was my dad doing sitting on it on an obviously cold day? Most importantly, why would my dad make this his profile picture, his way of greeting the online world? It was genius, that's why, and it turns out my dad has a genius wit.

The best part of having my dad as a Facebook friend, though, is that it keeps the family in constant contact with one another. If I post a picture of my son that's particularly funny or charming, my parents will comment on it or call to hear the full story. If I comment about an exciting happening during my day, my parents will ask me about it the next time we talk. We wouldn't share these relatively small but still meaningful moments if it weren't for Facebook.

I don't necessarily buy into the notion that the Internet has made the world smaller in every single circumstance, bringing everyone closer together in every conceivable way. In many ways, it has done just the opposite, by giving people the means to seclude themselves in their virtual lives rather than engaging in their actual lives.

But for all the ridiculous, overblown assertions that the Internet can erase divisions and bring people together, sometimes it actually does. Some people join couch-surfing groups and travel around the world, staying with complete strangers who share their love of travel. Others join online communities and talk to people from foreign countries, learning about cultures that, without the Internet, they'd never have the chance to experience.

And then there's me: I accepted my dad's friend request and found out that in addition to being a great dad, he's also pretty damn cool. Maybe that Friday night pub crawl is in our future yet. Well, perhaps a virtual beer first.