Improv Everywhere's new video showing human-on-alien violence is either a hoax or it isn't, but annoying either way 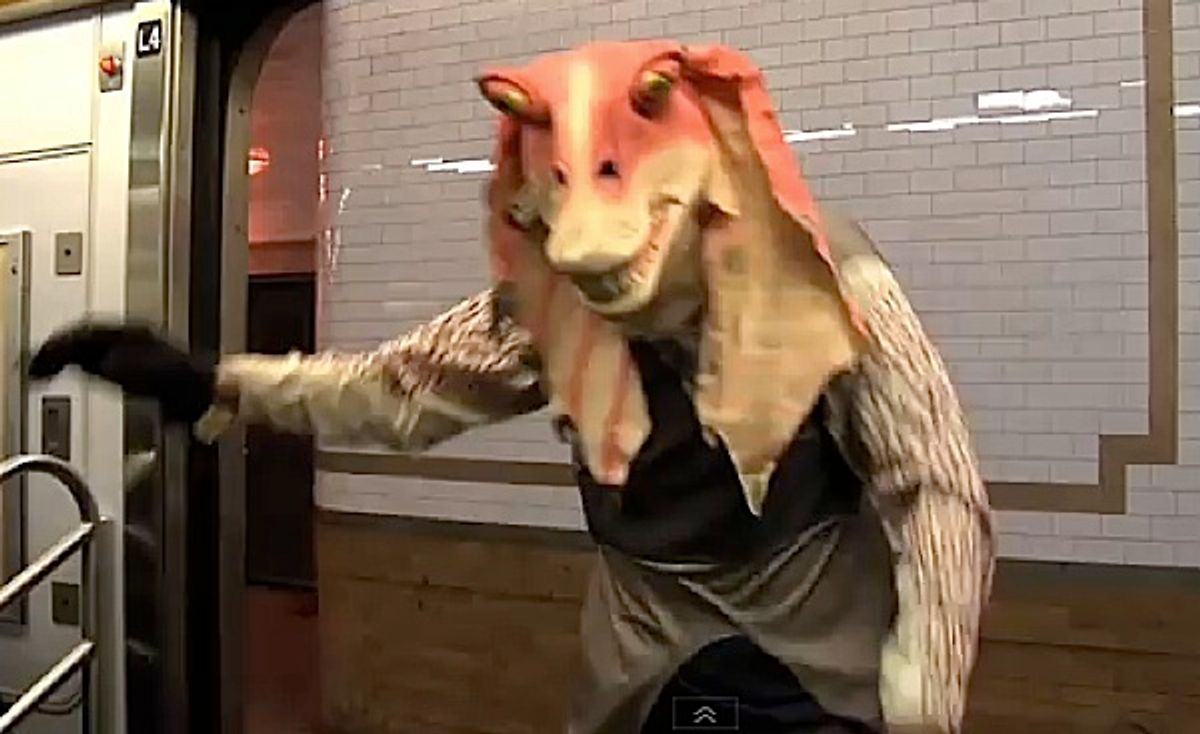 Who wouldn't want to punch this guy?
--

Look, I love a good pantsless subway ride as much as the next gal. But as Improv Everywhere has become synonymous with corporate-funded flash mobs for "Glee" (seriously) and annoying people who are just trying to go about their daily lives, I've started to think that maybe we've been improv'd out of good ideas and should just cut our losses on this one.

The video posted on Improv Everywhere's website today just serves to prove my point. In it, a guy dressed like Jar Jar Binks from the first three "Star Wars" films attempts to bring whimsy to a nearly empty subway car before getting in an altercation with three big guys who apparently liked "Return of the Jedi" better than Lucas' later work. After beating up the semi-racist caricture, the men then turn on Darth Maul, who had tried to get on the train at the following stop.

Now, this video probably isn't "real," despite that little bit in the end about the guy who played Jar Jar pressing charges. It's mostly likely just another dumb April Fools' Day prank, although if it isn't, Improv Everywhere comes off looking even worse. (Did that actor have to get in those guys' faces after they asked him repeatedly to stop?) And while I get more pleasure than anyone watching Jar Jar Binks fall to the ground from a series of blows, I'm not sure what's so improvised or even funny about pretending like someone was actually hurt in the making of this video. Like "April Fools! Don't actually try to arrest these men whose faces we put out on the Internet, officer!"

And those three people on the subway that weren't part of the experiment* must have gotten a real kick out of this whole experience as well. I'm sure they were just thrilled by what appeared to be three bikers beating the crap out of a Furry, on a day that we can only assume wasn't April 1st. (Unless they both filmed, edited, and put up this video in the past 12 or so hours). Good "prank," guys!

*Shouldn't the fact that there are fewer audience members than players for this little spectacle be a good tip-off that Improv Everywhere has run out of people willing to sit through their games?