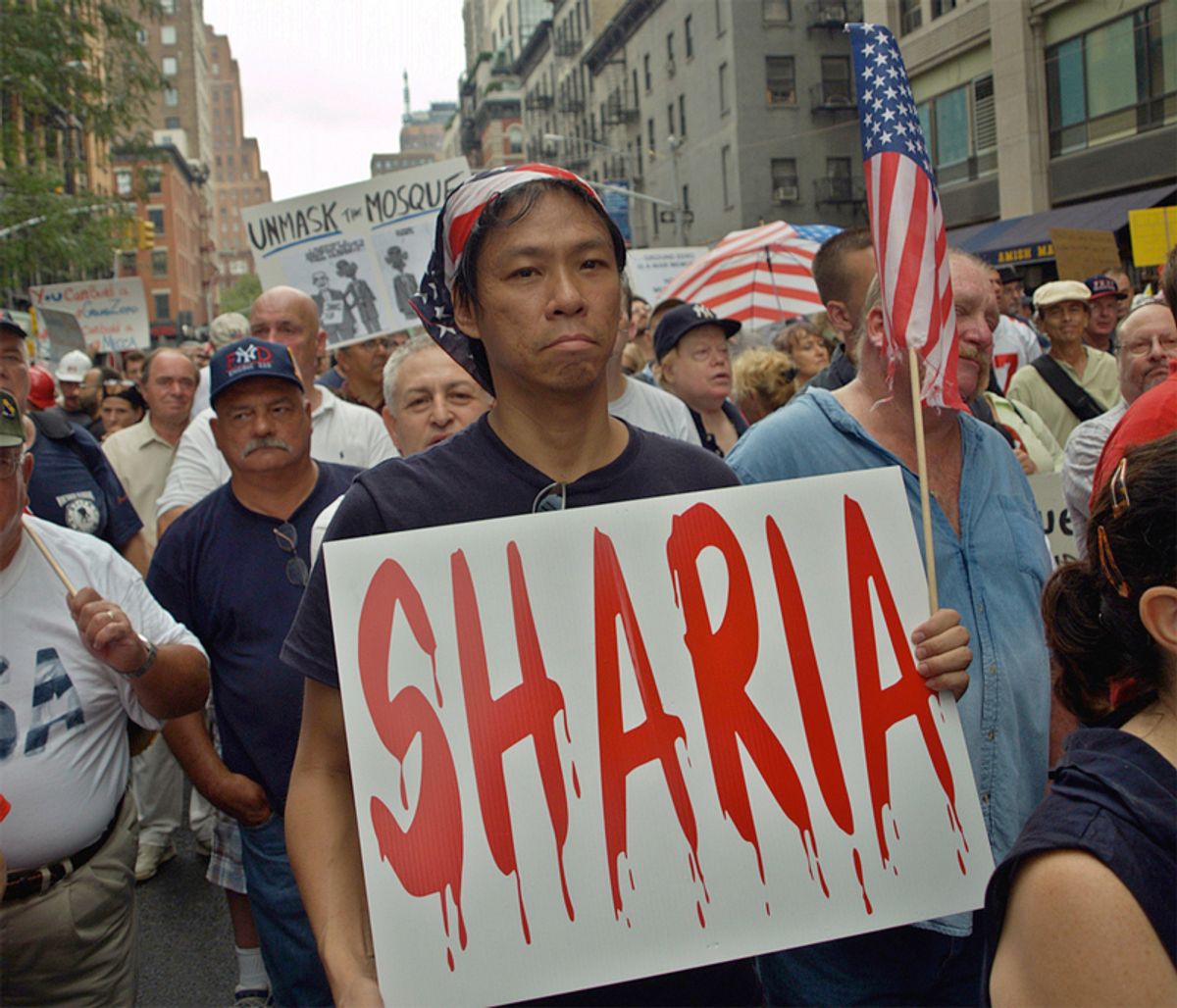 The movement to ban the use of sharia in the United States continues to grow, even as its proponents struggle to find examples of Islamic law posing a threat to the American way of life.

Anti-sharia activists have now resorted to focusing on an obscure Florida civil lawsuit called Mansour vs. Islamic Education Center of Tampa. The case, which has been elevated to cause celebre status in the right-wing blogosphere involves a mundane financial disagreement between two factions of the Islamic organization.

But in a ruling in the case last month, Hillsborough Circuit Judge Richard Nielsen wrote a sentence that has been seized on by anti-sharia activists: "This case will proceed under Ecclesiastical Islamic Law."

On the surface that may sound odd. And, indeed, the typical right-wing reaction has gone something like this: "A Florida judge ruled that a Muslim v. Muslim case can proceed under sharia law. I'm being unbelievably serious here! This kind of crap is why I drink, which would get me beheaded under sharia law. " Ironically, Nielsen is a registered Republican and Jeb Bush appointee.

And as it turns out, the case is entirely routine, according to Cyra Akila Choudhury, a professor at the College of Law at Florida International University who has been following the case closely. Nevertheless, the uproar over the case is "already bolstering the political prospects of an [anti-sharia] bill being considered by the Florida legislature," Politico reported.

I spoke with Choudhury to find out more about the case and why it's not at all cause for alarm. The following transcript of our conversation has been edited for length and clarity.

What is the dispute that led to this ruling?

The dispute is between two factions of an Islamic organization, the Islamic Education Center of Tampa, and centers on control of money that was given to them by the government through an eminent domain taking. It was about $2.2 million in this taking, so the controversy arose over who was going to control the proceeds from the settlement. As the lawsuit was moving along, the parties agreed to arbitrate, and the arbitrator would be a Muslim law scholar, an a'lim. That is somebody who is well-versed in Islamic law and would settle the dispute in terms of Islamic law principles.

Who are the two parties?

They're different factions of this organization. In January, the side that emerged victorious from the arbitration filed a motion asking the court to essentially enforce the decision of the arbitrator. Arbitration is an alternative dispute resolution mechanism, in which parties decide not to go into court and not litigate. The rules that apply are chosen by both parties in the agreement. We do lots of arbitration in this country. We apply all kinds of laws, we have many religious mechanisms; for instance, the Jewish community has the beth din. That is basically an alternative court that applies Jewish law and performs litigation with regards to all kinds of civil disputes. It's very common, and it has existed for many years.

In this Florida case, the judge's ruling is getting all the attention. When he uses the line "this case will proceed under ecclesiastical Islamic law," what is that actually about?

What the ruling put very simply was, "You agreed to these rules, and the court is bound to apply them." It isn't about who wins. The arbitrator has already decided who wins. The judge's role in the conflict is to enforce or to set aside the arbitration result. It is very difficult to set aside an arbitration result. You have to show that there was some sort of impropriety in the procedure.

Did the judge decide that the arbitrated agreement should or shouldn't be enforced?

It's still out. He still has to hear evidence about the process. The decision says "the court will require further testimony to determine whether the Islamic resolution procedures have been followed in this matter." So it's clear from this that one side is resisting enforcement based on some challenge of improper procedure. The judge has to hear evidence on that. This is very similar to many other arbitration scenarios. You can pick for your arbitration any set of laws that both parties agree to -- within reason. It's really a contractual matter. You're entering into a contract with the other side to arbitrate your disagreement, and you agree upon the rules, and the arbitrator applies those rules. So for instance sharia law in this case simply applies the ecclesiastical religious law of the two parties. This is a conflict around a religious institution. It's not a dispute between say, a Muslim property owner and his Christian or Jewish neighbor -- but even there, if they agreed to use sharia law, that would be enforced.

What do you make of the intense reaction to this decision around the country?

It has been peculiar. What the judge did was extremely noncontroversial, particularly when it comes to religious organizations. It happens all the time. It happens with regards to the Jewish mediation and arbitration, it happens with arbitration that has used foreign law. What's disheartening about this is the level of misinformation and the level of ignorance about our own legal system that has been propagated by people who either have an agenda or simply do not understand what we do in the civil system. This really is fundamentally about our right to contract. If we unsettle arbitration rules on the grounds that we don't like a law that somebody is agreeing to arbitrate under, we're going to have a lot of problems when it comes to all kinds of other contractual arbitration clauses that call for foreign law. In a place like Florida, for example, with Latin America on its doorstep, there's so much business done with Latin American countries.

There's currently an anti-sharia bill in the Florida legislature. If a law like that passed, how would it effect a situation like this?

If you ask the lawmakers, "Has there ever been a situation in which sharia has been applied in a way that is antithetical to our public policy?" The answer is always no. It's a fundamental misapprehension of our legal system to believe this can actually happen. People are writing on the blogosphere "Judge Nielsen is pro-sharia law, what's next? Stoning of women?! Chopping off heads?!" We have a criminal system of law in the United States. The state prosecutes criminals under state criminal law. It's never going to apply Jordanian law in the United States. That would never happen. You have to be completely ignorant to make these claims, unless you're making them opportunistically in order to fan the flames of bigotry.