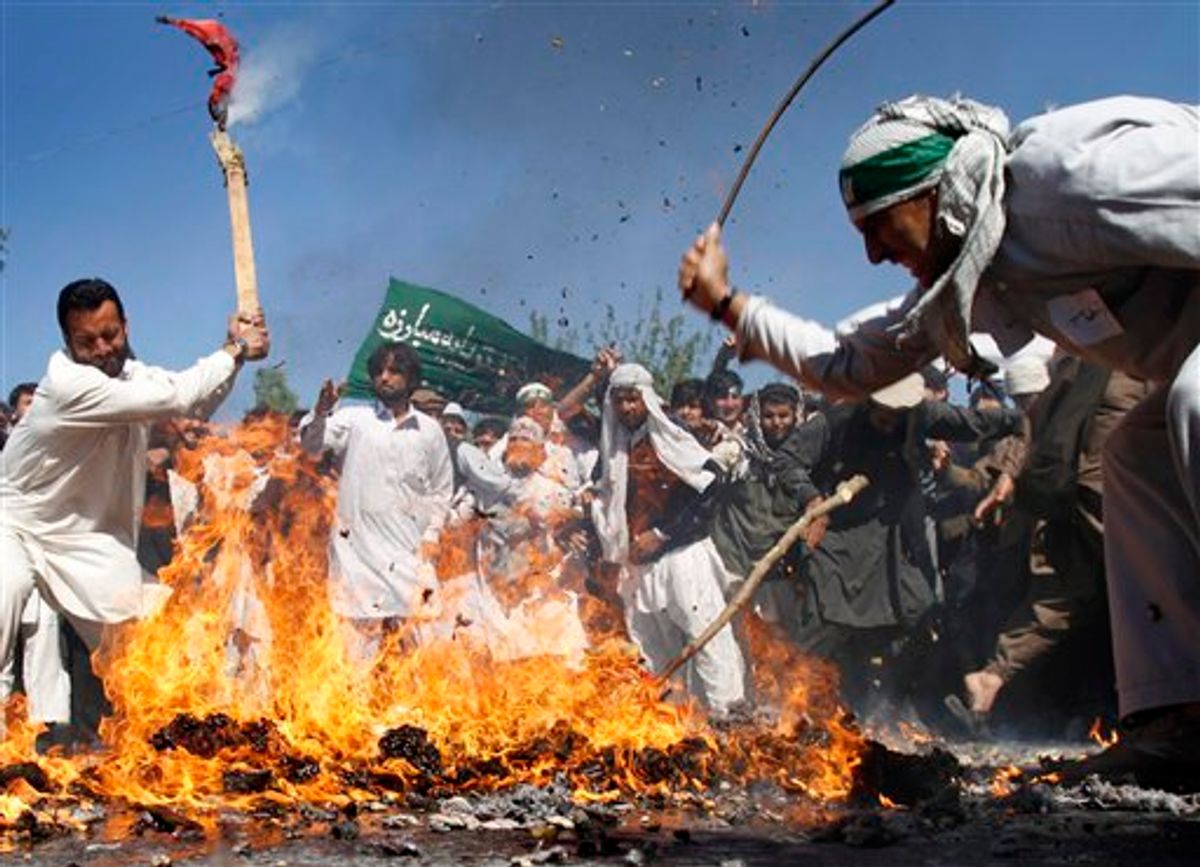 Afghan protestors beat a burning effigy of U.S. President Barack Obama during a demonstration in Jalalabad, Afghanistan on Sunday, April 3, 2011. Afghan protests against the burning of a Quran in Florida entered a third day with a demonstration in the major eastern city Sunday, while the Taliban called on people to rise up, blaming government forces for any violence. (AP Photo/Rahmat Gul) (AP)
--

Demonstrators battled police in southern Afghanistan's main city on Sunday and took to the streets in the turbulent east for the first time as Western pleas failed to halt the third day of rage over a Florida pastor's burning of the Quran.

In Jalalabad, the largest city in the east, hundreds of people blocked the main highway for three hours, shouting for U.S. troops to leave, burning an effigy of President Barack Obama and stomping on a drawing of a U.S. flag. More than 1,000 people set tires ablaze to block the highway in eastern Parwan province for about an hour, provincial police chief Sher Ahmad Maladani said.

Resentment has been building for years here over the operations of Western military forces, blamed for killing and mistreating civilians, and international contractors, seen by many as enriching themselves and fueling corruption at the expense of ordinary Afghans.

Coverage of the ongoing trial of a group of U.S. soldiers' charged with killings of Afghan civilians and the publication of photos of some posing with dead bodies fueled that anger, which violently erupted Friday in a protest over the little-publicized destruction of the Quran last month.

Thousands of demonstrators in the previously peaceful northern city of Mazar-i-Sharif poured into the streets after Friday prayers and overran a U.N. compound, killing three U.N. staff members and four Nepalese guards.

On Saturday, hundreds of Afghans holding copies of the Quran over their heads marched in Kandahar before starting to attack cars and businesses. Security forces opened fire and nine protesters were killed but the governor of Kandahar said officers had only fired into the air. He said 81 were wounded and 17 people, including seven armed men, had been arrested.

Military commander Gen. David Petraeus and the top NATO civilian representative in Afghanistan, Mark Sedwill, said that they "hope the Afghan people understand that the actions of a small number of individuals, who have been extremely disrespectful to the Holy Quran, are not representative of any of the countries of the international community who are in Afghanistan to help the Afghan people."

The Taliban said in a statement emailed to media outlets that the U.S. and other Western countries had wrongly excused the burning of the Quran on March 20 as freedom of speech and that Afghans "cannot accept this un-Islamic act."

"Afghan forces under the order of the foreign forces attacked unarmed people during the protests, killing them and arresting some, saying there were armed people among these protesters, which was not true," the Taliban said.

The governor of Kandahar said he and the main leaders of the protests in the southern city had reached an agreement that would end the demonstrations. He did not provide details.