Why Mitch Daniels is the Republican to watch for '12

The GOP field is dull and littered with birthers and religious fanatics: There's an opening for Mitch Daniels 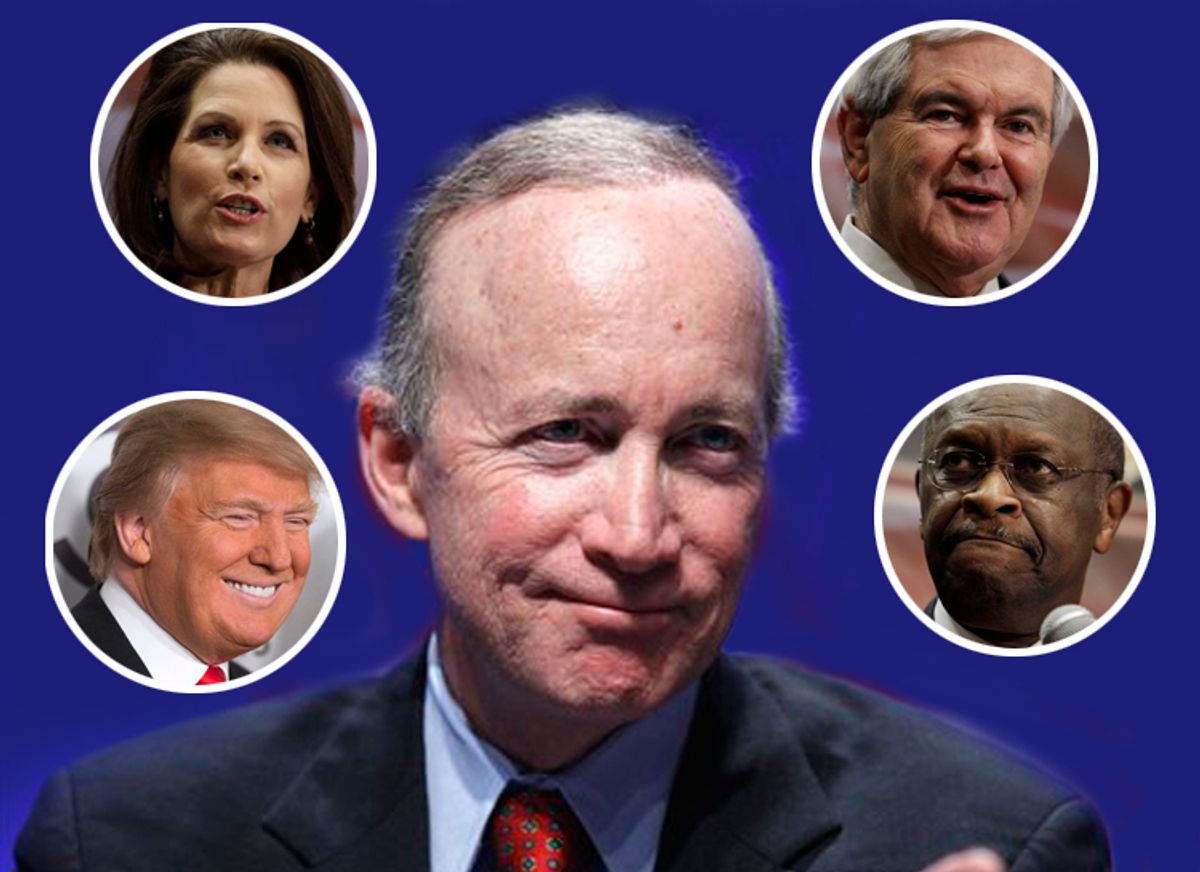 FILE - In this Feb. 11, 2011 file photo, Indiana Gov Mitch Daniels speaks in Washington. With a wary eye on Wisconsin, Republican leaders in several states are toning down the tough talk against public-employee unions and even abandoning union-limiting measures altogether. Indiana's governor urges GOP lawmakers to give up a right-to-work bill for fear the backlash could derail the rest of his agenda; Ohio senators plan to soften a bill that would have banned collective bargaining, and the Michigan governor says he'd rather negotiate than "pick fights." (AP Photo/Jose Luis Magana, File) (Jose Luis Magana)
--

To look at the Republican presidential field from afar is to conclude that -- of all people -- the governor of Indiana would be well-positioned to win the nomination, should he decide to run.

Yes, trying to predict the electoral outcomes a year ahead of time can be a fool's errand, but it's not hard to see the opening for Mitch Daniels: The GOP field is deeply flawed -- the most prominent "candidate" at the moment seems to be a reality show host who's become obsessed with birtherism -- and deathly stale, littered with dried-out pols. Daniels, by contrast, would be a genuinely fresh face on the national stage and would combine the appeal of an outsider -- he was overwhelmingly reelected in Indiana in 2008, even as President Obama carried the state -- with the savvy of a D.C. insider (which he was during the first part of George W. Bush's administration).

Daniels has been coy about his intentions so far, but his potential strength on the GOP side is made clear in part by a simple process of elimination.

Mitt Romney, the nominal GOP front-runner, may be President Obama’s strongest potential foe, but he has been on the national scene for nearly a decade and hasn’t been able to garner overwhelming intra-party support -- even though he started running for the 2012 nomination as soon as his 2008 run fizzled. Romney’s anemic poll numbers among conservative voters speak to this. Mike Huckabee, Romney's chief personal nemesis, has somewhat similar problems. He fared better than expected in 2008, but in the three years since then, he's failed to establish a broad line of party support.

Parallel deficiencies plague the rest of the field. If a presidential "freshness test" exists, Newt Gingrich expired as a viable contender years ago -- even before he became House speaker in 1995. Haley Barbour was only elected governor of Mississippi in 2003, but he's had a long career on the national stage and has been well-known as a Republican operative since the Reagan years. Tim Pawlenty doesn’t suffer from the same freshness problems, but there's little discernible enthusiasm for him among rank-and-file Republicans -- despite his relentless efforts to create it. Perhaps he could slip through if others falter, but on his own legs, he's a classic "Where’s the beef?" candidate.

As for Sarah Palin, her collapsing poll numbers notwithstanding, it's easier being a celebrity than a leader, and Palin is not abandoning that lifestyle when she well knows the example set by Rudy Giuliani, whose high appearance fees dropped like a stone with his pathetic 2008 loss. And no one who served in a prominent position in the Obama administration, as Jon Huntsman did, is ever winning a national Republican primary in the existing climate; not in a million years.

Given these realities, Daniels could enter the contest and separate himself immediately. Like Barbour, he was a key member of a GOP administration figure, serving as George W. Bush’s first OMB head. But unlike Barbour, Daniels' D.C. days are not well-known or remembered. He's not instantly associated with the Beltway -- and he only became widely known during his time as Indiana's governor. Daniels could run as an outsider governor from the heartland, attacking the D.C. establishment and Obama administration from afar.

He would also be able to use his gubernatorial record to appeal to the party's conservative base. Indiana's jobless rate sits below 9 percent, better than many states and something Daniels can grab some political credit for. And whatever you think of them from a policy standpoint, his stubborn opposition to tax increases and his early attacks against unions (on which Scott Walker seems to have modeled his own approach in Wisconsin) would have enormous appeal to conservatives searching hard for the genuine article.

Daniels would face hurdles. He would be vulnerable to more vociferous culture warriors like Pawlenty and Huckabee -- the result of the pro-life Daniels' call for a "truce" on social issues. But as the rise of the Tea Party demonstrates, today's GOP base is almost obsessively fixated on budget-cutting rhetoric and the elimination of the left's favorite government programs. This could benefit Daniels, with his fiscal emphasis.

It's true that Daniels, with his small physical stature and penchant for dry, technical language, isn't exactly a natural candidate. But if any of his prospective GOP primary foes were truly political rock stars, there wouldn't be such a vacuum right now. And while many Republicans dream of Chris Christie or Marco Rubio riding to their rescue, there's no reason to believe that either of them -- or any other potentially attractive dark horses -- will be entering the race.

Thus, the Republican race remains wide open. And should Daniels decide to run, he would be in a strong position to swoop in and grab the nomination. Of course, whether he would ultimately capture the big prize is another matter entirely. But when it comes to the GOP contest, he's a bigger player than he looks.