Why Charlie Sheen's live show was bound to fail

The disgraced star tries to imitate Coco and Jon Stewart. But this weekend made it clear: He's no man of the people 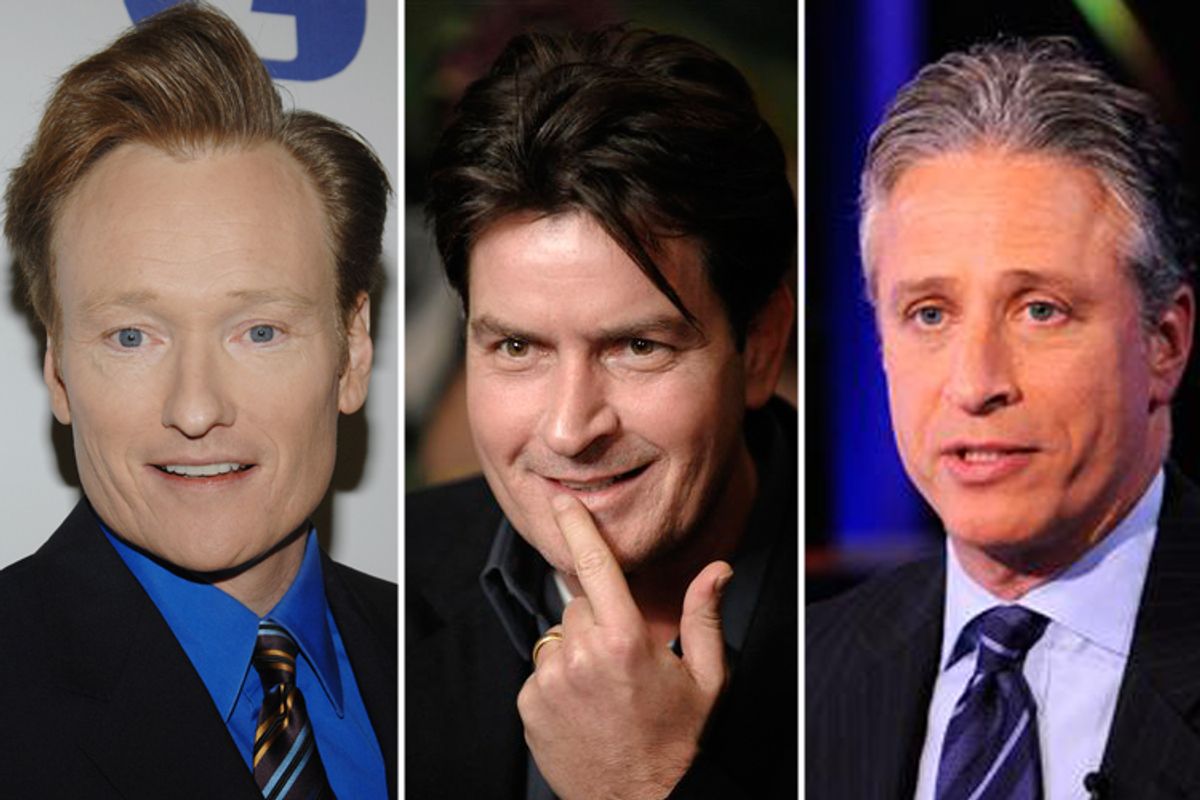 You know the story: overpaid star of television franchise has messy, public falling out with bosses, torches many bridges, leaves his show, and winds up going on a sold-out, cross-country live tour. But Charlie Sheen, you are no Coco. Nor are you, either, close to anybody's notion of a Rally to Restore Sanity.

When Sheen began going more off the rails than usual earlier this year, colorfully badmouthing the "Two and a Half Men" team that have kept him hip deep in porn stars and mind-altering substances all these years, it was only a matter of time before his historically indulgent overseers had no choice but to kick his warlock butt to the curb. Sheen petulantly ranted about the injustice of it all. He got on Twitter. And along the way, he got the notion that there might be an audience for his kooky, Vatican assassin shtick. With a suddenly freed up schedule, he took to the road on what may well prove to be his boldest move – the massively ill-advised "Violent Torpedo of Truth" tour.

There can be little doubt that Sheen has been inspired by taking-it-to-the-people success of Conan O'Brien's Legally Prohibited From Being Funny on Television Tour and "The Daily Show" and "Colbert Report's" feel-good one-off, the Rally to Restore Sanity. And a guy who can amass a few million followers on Twitter in a matter of days and sell out Radio City Music Hall in a half-hour, a man who until recently was starring on a top-rated sitcom, might understandably have believed that he was cut out for mingling among his people. He must have been surprised, then, when he was booed off stage for his failure to entertain in Detroit this weekend. And though he subsequently fared better in Chicago, his lackluster showing so far doesn't bode well for the future of the tour for a self-described "total bitchin' rock star from Mars."

Where did he go wrong? I mean, aside from the limited talent and apparent insanity? Well, for starters, both Legally Prohibited and the Rally to Restore Sanity were, even in their hasty constructions, well-thought-out events, powered by stars who've built their careers in front of live audiences and are adept at connecting with them. They also were true events, shows that moved along as entertainment spectacles rather than James Lipton-esque chitchats. O'Brien knew even the most loyal of fans didn't want to see just him moping about his "Tonight Show" ouster, so his live tour featured a lively revolving array of supporting talent. Jon Hamm dropped by in Los Angeles. Jack White jammed in Nashville. And Paul Rudd and Vampire Weekend were on the lineup in New York. And October's Rally to Restore Sanity wasn't just a live version of a weeknight Comedy Central lineup -- it had the world's first Yusuf Islam/Ozzy Osbourne/O'Jay's medley. It had R2D2.  It was, quite simply, fun.

Sheen, in contrast, has gambled on his own charms to carry his live tour, perhaps because few other stars are dying to associate themselves with his toxic waste dump of a current career. Charm is not exactly what Sheen is famed for. Sheen's characteristic egomania is tough enough to bear when he's aiming at Andrea Canning, but it really loses its luster when he's verbally abusing the people who paid up to $145 to see him.

And that's the real difference between Teams Coco and Sanity and Team Sheen -- the likability factor. When Conan was squeezed out of a job last year, he managed to make losing "The Tonight Show" seem like a completely relatable, all too common American experience. He connected with his audience, not as some "winning" maniac but as just another guy who'd had a dream crushed out of him. What happened to O'Brien was pretty epic, but it was also eminently relatable. And his audience, armed with their I'm with Coco sloganeering, quickly became part of the story. The tour wasn't just about Conan O'Brien. It was about the fans, and their own need to believe that "if you work hard and you're kind, amazing things will happen." Not exactly a line from the Sheen playbook, is it?

The Rally to Restore Sanity, which began life as an online campaign on Reddit, was even more of a crowdsourced happening. What happened on the stage in Washington back in October was a direct response to what the audience wanted, sentiments the people themselves were burning to express.  Sheen's audience isn't made of people who feel Sheen is articulating something of their own experience (and the exceptions are unmitigated jerk-offs). Instead, his crowd is in no small part composed of curious gawkers looking for a glimpse of the train wreck. The big non-surprise of the Sheen tour is that it turns out that even the rubberneckers don't want to get an earful of how much they suck from a man whose main claim to fame these days is his abusiveness. Turns out being a creep is not much worth celebrating after all. And if you're going to be a douchebag of a bitchin' rock star, maybe you should at least learn how to play guitar.