Why Charlie Sheen's audience is worse than he is

Fans boo and demand a refund on the first stop of the actor's Torpedo tour. What exactly were they expecting? 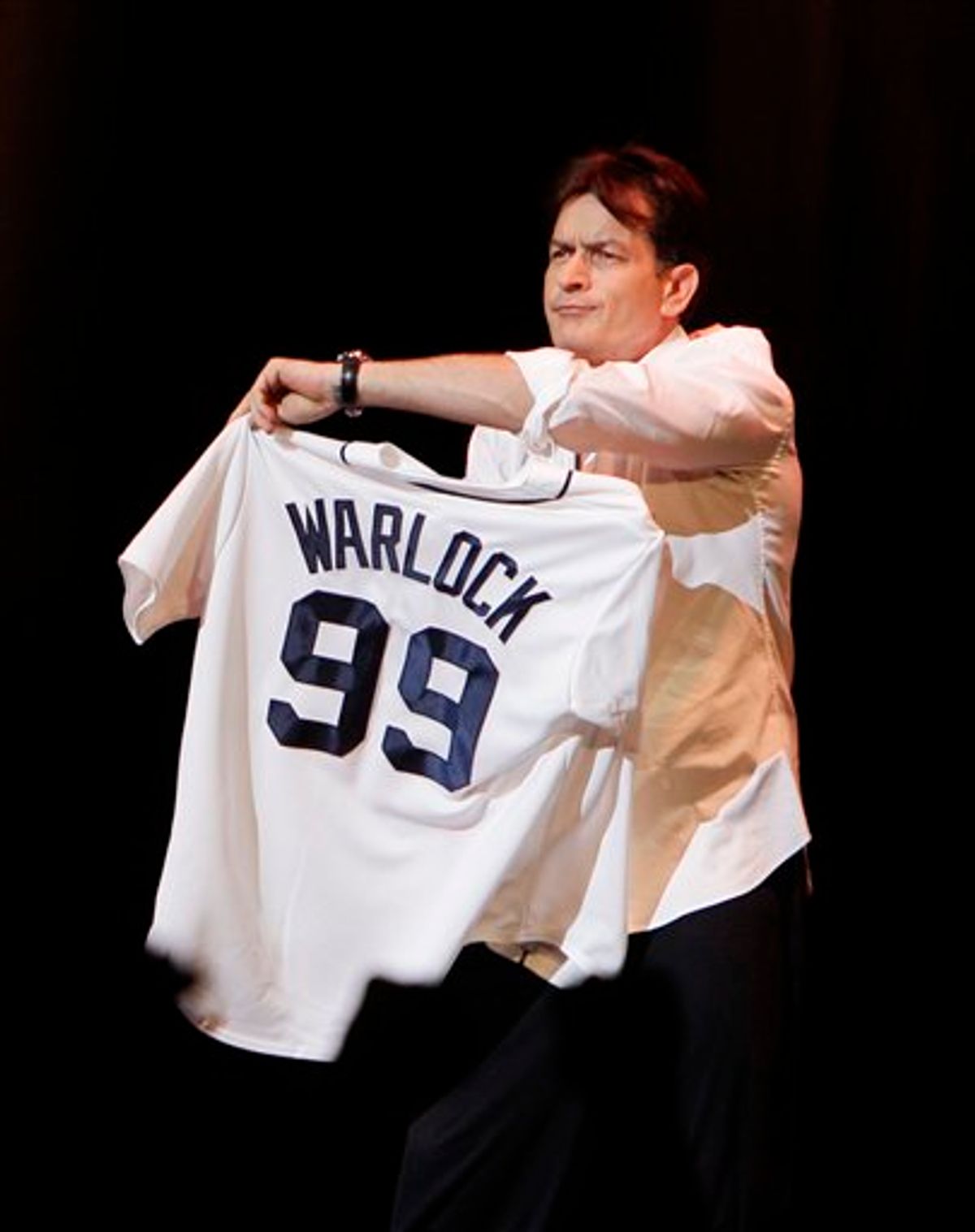 Actor Charlie Sheen shows off his Detroit Tigers jersey during his performance at the Fox Theatre in Detroit, Saturday, April 2, 2011. Promising "the real story," the 45-year-old former "Two and a Half Men" star hit the road for a month-long, 20-city variety show tour, with the first stop Saturday's sold-out show in Detroit. (AP Photo/Carlos Osorio) (AP)
--

In a turn of events that no one could have seen coming a mile away with one of those sniper telescope lenses, Charlie Sheen's first stop on his "Violent Torpedo of Truth" tour was not a complete success. So weird. Who would have expected that a mentally unstable, alcoholic/drug addict with a history of abusing women would end up getting booed off the stage?

On Saturday Sheen kicked off the Violent Torpedo in Detroit, where he packed the house with 4,700 "fans" who paid an average of $145 for the privilege of listening to advice from a guy who -- despite making more money than anyone else in television -- doesn't own a coffee table. Maybe all of those ticket sales were from people who were just curious about what the show was going to be about and were shocked when the program segued from girls making out with each other onstage to Sheen's speaking portion. How else can you explain why so many people began to boo and walk out, leading Charlie to exclaim, "I already got your money!" and enraging the audience to a degree only previously felt by Chuck Lorre?

I'm baffled by this reaction.What right do these people have to demand their money back? You paid to see a carnival sideshow and that's what you got. The reason Sheen's "Violent Torpedo" sold so many tickets wasn't because his fans wanted to see the "Two and a Half Men" star perform a Beckett play, they were expecting more of the (literal) insanity that Charlie displayed during his barrage of media appearances over the last month. And that's what they got, specifically when Sheen stepped in front of a podium and started ranting, "Freedom from monkey eyed … sweat-eating whores ... I'm a giant and leaky bag of mayhem.”

But if I may make a Sheenesque metaphor, you can't keep a man filled with tiger blood locked in a cage, and when Charlie said he was going to tell some stories about crack, because "I figured Detroit was a good place to tell some crack stories," the "fans" grew angry. How dare he insult them personally, when they had paid good money to laugh at the broken human being who gave them such funny, nonsensical (but highly quotable) sound bites on TV! And when he called Sarah Palin a whore, well that really ticked off the Detroit audience, who began to boo Sheen, despite the fact that they knowingly paid money to support a man who lives with an escort and a porn star, and who has not only disparaged almost every woman he's been romantically linked to, but physically threatened them as well. Jeez, being called a whore by Charlie Sheen is practically a compliment!

There have been some grainy uploads of the event, and even in the very best one you can't really tell if the audience is booing or cheering. Mainly, they are going ape-shit, like leering spectators at a Roman arena, cheering for first blood.

So no, I really don't understand the outrage of people who felt cheated and left the show shouting "Refund!!", unless they were angry that he cut the show 20 minutes short. The only thing these people deserve back is their decency, and the accompanying feeling of shame that comes with it. No, you shouldn't feel bad for Charlie Sheen; he doesn't deserve your sympathy and he's already got your money (as he noted). You should feel ashamed of yourselves for funding this freak show. I hope this is the case, as the ticket sales have mysteriously begun to plummet for the rest of the tour. (No word yet on whether Sheen gets that $7 million fee for playing to empty theaters.)

I have hope, but I'm also not stupid. Some of you will not learn, and you will spend even more money to buy another ticket to Charlie Sheen's Violent Torpedo in order to watch this whole train wreck all over again, perhaps this time armed with rotten fruit to throw onstage. Don't believe me? The website RingsideReport.com reported one attendee's response after the show:

"Sheen, Sheen, Sheen…the man just ain’t right. You know, I typically would have jumped over a fence, stomped on my mother’s testicles and done many other things just to get his autograph, but he just flat out bombed. I was there with my 'Georgie Girl' and damn, we just didn’t get our money’s worth. We booed with the rest of them." – Anthony Santiago

Santiago, one of our biggest supporters here at RSR has stated that he has purchased tickets for the next show, despite the bad experience. He said: "Me and my Georgie Girl just like to boo…a bad time can be good. Holla."

Holla, indeed. Reports suggest that Sheen's Sunday night show in Chicago was a much bigger success. Hope that bad/good booing experience is worth the money that's going right back into Sheen's coke-lined pockets.