Is this how Democrats solve their Durbin-Schumer dilemma?

There may be more than meets the eye to rumors about Richard Durbin and the D.N.C. chairmanship -- a lot more 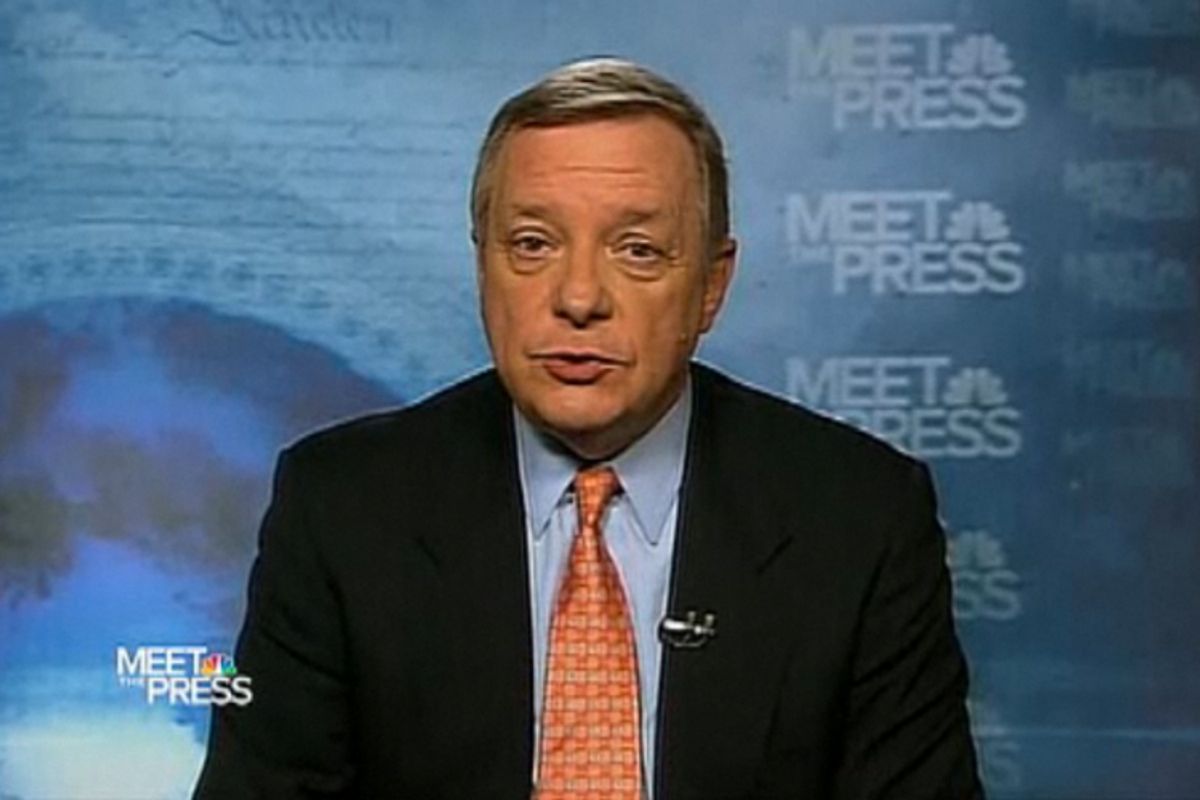 On the surface, it may have sounded like an innocent, familiar exchange. At the end of his appearance on "Meet the Press" on Sunday, Sen. Richard Durbin was asked by David Gregory if he'd be interested in the chairmanship of the Democratic National Committee, a post that could soon be vacant.

"The idea of traipsing all over the United States is not really on my agenda," the Illinois senator replied. When Gregory then asked if Durbin would take the job if President Obama urged him to do so, Durbin ducked, simply replying that he's not "soliciting" the post and enjoys the job he has now.

The DNC slot is currently occupied by Tim Kaine, but the former Virginia governor is under heavy pressure to run for the Senate, potentially against George Allen, who is waging a comeback bid. And if Kaine takes the plunge, Durbin -- with his close personal and political ties to Obama --  would be a logical successor. So it was hardly surprising that Gregory asked -- and that Durbin was evasive.

But the story probably goes deeper than this.

The 66-year-old Durbin's Senate career has arrived at a frustrating moment. Just over six years ago, after the 2004 elections, he took a major step forward, winning the No. 2 Senate leadership post on the Democratic side. It was the same post (whip) that Harry Reid had held for the previous six years -- and Reid had used it as a springboard to the top leadership job (which he won after the '04 election, when Minority Leader Tom Daschle was defeated for reelection in South Dakota). Durbin, it seemed likely, would one day make the same leap.

But things quickly became complicated. Two years later, in the 2006 midterms, Democrats posted enormous gains and took back the Senate. This should have been great news for Durbin, who stood to become the majority whip, but there was a catch: The man who had organized the Democrats' '06 campaign efforts wanted a lot more than just a pat on the back. Instead, New York's Chuck Schumer wanted to join the leadership -- or else, he made clear, he wouldn't run the campaign organization again in 2008. Eager to keep Schumer (and his formidable fund-raising skills) on board, Reid created a brand new leadership position just for him: Caucus vice chairman. Technically, this made Schumer the third-ranking Senate Democrat, but as a practical matter, he and Durbin were now equals -- both highly-visible Reid lieutenants with important-sounding titles. It was no longer quite so clear that Durbin was the next-in-line.

The '08 elections brought in another batch of Democratic freshman, all of them recruited, coached and assisted financially by Schumer. Like the freshmen elected in '06, many of them came to Washington already comfortable working with -- and taking orders from -- Schumer, not Durbin. And when 2010 rolled around, Schumer appeared ready to cash in. Reid was up for reelection in Nevada, and his poll numbers were poisonous. National Republicans called him their top target -- just as they'd done with Daschle in '04. A leadership vacancy seemed inevitable -- and Schumer, with his army of new members, was starting to look like a good bet to supplant Durbin and fill it.

We'll never know how that contest would have played out. Thanks to Sharron Angle's erratic antics, Reid scored a thoroughly improbable upset and returned to Washington. But in one of his first post-election moves, he tapped Schumer for a promotion, handing the New Yorker control of the party's message and policy operation for the 2012 cycle -- and creating questions about what, exactly, Durbin's leadership role now involved. (And, as I wrote at Capital New York today, Schumer has certainly met -- and probably exceeded -- Reid's expectations in his new role.)

Against this backdrop, the Durbin/DNC chatter takes on new significance. He's not exactly marginalized in the Senate, but in the past few years Durbin's stature has steadily eroded, while Schumer's profile -- in and out of the Senate -- has expanded. It really feels like two ships passing in opposite directions.

Now, consider the Senate battleground for 2012. Democrats currently enjoy a 53-47 advantage, but almost all of next year's action will be on their turf. Under the best circumstances for Democrats, GOP-held seats may be vulnerable in Nevada, Massachusetts, Maine and Indiana -- and that's it. And even this is probably a stretch. As we reported last week, Democrats' own polling shows Republican Scott Brown is massively popular in Massachusetts -- so much that it's increasingly likely that the Democrats' top-tier prospects will sit the race out. Maine is only a possibility because Tea Party activists may knock off Olympia Snowe in a GOP primary; but as I've written, Snowe would likely be unbeatable if she were to run as an independent (and, in victory, she could then return to the GOP fold -- as Lisa Murkowski did in Alaska last year). Democratic hopes in Indiana rest on a similar scenario -- Richard Lugar losing his GOP primary. The problem there is that Richard Mourdock, the state treasurer who is challenging Lugar from the right, seems to have enough mainstream appeal to win a general election. In other words, it's hard to see Democrats winning many -- or even any -- GOP -held Senate seats next year.

But it's easy to see the GOP picking up a bunch of Democratic seats. North Dakota, where Kent Conrad is retiring, already looks gone. Nebraska, where Ben Nelson's popularity has cratered, could be in this category too. Montana, Missouri, Virginia, West Virginia and Florida could all be at risk, too.

This means that that the odds are decent that Republicans will win back the Senate in November 2012 -- which would make that a logical time for Reid, who will then be 73, to step down as party leader. The way things look now, Schumer would be the clear favorite to replace him. This is why the Durbin/DNC scenario is so fascinating: It would be a face-saving way to offer Durbin a promotion, to end the awkward Schumer/Durbin Senate leadership arrangement, and to avoid a divisive Senate leadership fight after the '12 elections.

There is something of a precedent for this. After the 1994 elections, when Democrats lost control of the Senate (and when Jim Sasser, the Democratic leader-to-be, was defeated for reelection in Tennessee),  Chris Dodd waged a last-minute campaign against Tom Daschle for the party's top Senate post. Daschle prevailed by one vote, 24 to 23, but the Clinton White House quickly swooped in to give Dodd a prize of his own: the DNC chairmanship. Dodd had been a good soldier and Clinton didn't want any needless divisions in the party, so the move made sense. If Obama ends up pursuing Durbin for the DNC chairmanship, it will probably mean that similar logic is at work.