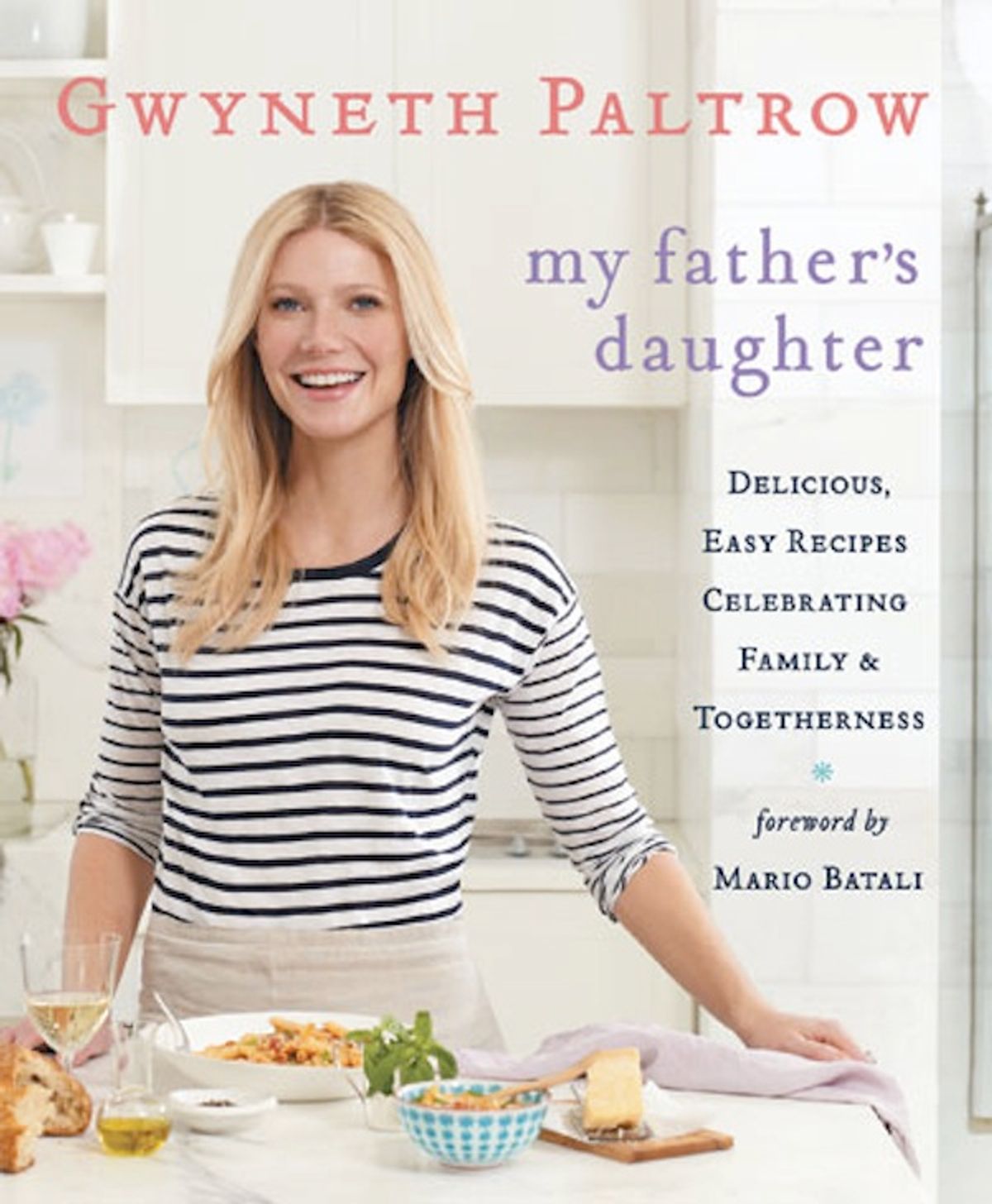 White Knighting: (verb) Coming to the defense of an unpopular Internet celebrity, trend, or entity. As in "Dude, stop talking about how much you like 'Friday.' We all know you're just white knighting Rebecca Black.

Gwyneth Paltrow is like the James Franco of bourgeois aestheticism. While James is busy being an artist/author/teacher/actor/etc., Mrs. Coldplay has branched out her career from actress to include singer, lifestyle mommy blogger and, most recently, health food authority. Despite having her cooking magazine concept turned down by Hearst, Gwyneth is undeterred: Her recent recipe book, "My Father's Daughter: Delicious, Easy Recipes Celebrating Family & Togetherness," has just hit the shelves after a truckload of buzz. And like Franco, Gwyneth is one of those people who is just easy to snark on: Her GOOP newsletter is designed for people just like herself -- that is to say, moms who appreciate the tip that $60 olive oil is worth it and that a macrobiotic diet is totally key for your child's health -- making her an easy target for her clueless haute sensibilities. As Gabe Delahaye on Videogum wrote after Gwyneth came out with her "How to stuff a chicken" video:

First off, you're going to want to start with one completely over-inflated sense of self-importance that allows for the belief that you should show people how to cook something for some reason even though you don’t need to do that at all and probably shouldn’t, thickly glazed with your practiced air of faux-populism as if you were not born to a famous actress and a highly successful producer, raised in Hollywood and private boarding schools, before yourself becoming a famous movie actress (or "actor,” as you would probably say), who then married a rock star and named her first child Apple.

This is a criticism I can relate to! Who is Gwyneth writing for, who are her tips helping? But after reading "My Father's Daughter," in which Gwyneth combines recipes with anecdotes about her father, Bruce Paltrow, impressing the importance of food and family on the actress before he passed away in 2002, I found myself ... moved? Maybe not moved, exactly. After all, I almost threw the book away in disgust after reading this opening segment about what you MAY substitute spelt or sheep's milk for if you don't have time to go to your local fresh farmer's market:

Oh, I can substitute cow's milk for almond milk?! And pork bacon for tempeh and/or turkey bacon? Though these substitutions will come at the price of you explaining to me exactly why I shouldn't do those things? Who wouldn't want to read that piece of condescending cooking advice? Just from those first couple of pages, I was tempted to believe Eater.com's pre-review of the book, which warned that the prose altered between "lofty crypto-macrobiotic lecturing ... and homey, Country Strong I'm-just-like-you talk ('It's a one-pan dish and easy cleanup!')."

But once you get past your initial nausea of Gwyneth's clueless haute couture sensibility, the recipes themselves are relatively simple and easy to make. Sure, there are the grilled "bake stuffed" lobsters and the duck "cassoulet" (her quotes, not mine), but there's also a lemon pasta dish that has five ingredients, all of which I had at home. It's almost as if Gwyneth wrote a helpful, totally easy to use cookbook that is as useful to college students as it is for hostesses in the Hamptons, but then she felt the need to GOOP it up with all this early, condescending text just to fill her quota of snobbishness. But skip the essays and go straight to the recipes, and you might be surprised how easy Gwyneth's healthy medicine goes down.