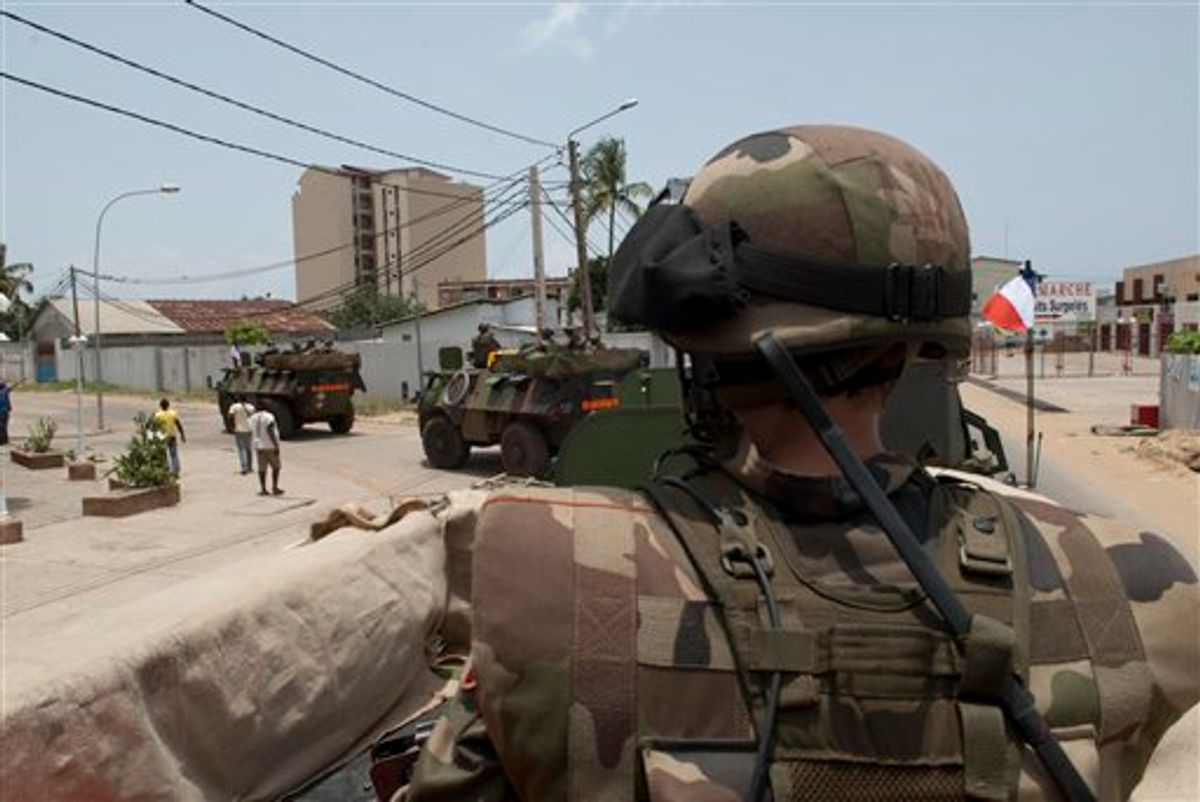 This handout photo provided by the French Defense Ministry on Sunday April 3, 2011, shows French soldiers patrolling as part of the French Force Licorne, in Port Bouet district of Abidjan, Saturday, April, 2, 2011. The United Nations mission in Ivory Coast began moving some 200 employees out of the main city Sunday after repeated attacks on its headquarters, as fighters loyal to the internationally recognized president prepared for a battle to oust the incumbent leader. (AP Photo/Sch. Blanchet, ECPAD) NO SALES (AP)
--

A United Nations helicopter fired at strongman Laurent Gbagbo's forces on Monday as France authorized its military to take out his heavy weapons, an unprecedented escalation in the international community's efforts to oust the entrenched leader.

The office of French President Nicolas Sarkozy said U.N. Secretary-General Ban Ki-moon had requested France's military participation. Gbagbo lost presidential elections in November but refused to cede power even as his nation teetered on the brink of all-out civil war.

The helicopter fired on Gbagbo's troops at about 5 p.m. local time (1700 GMT) to prevent them from using heavy weapons at the Akouedo camp in Abidjan, said the spokesman for the U.N. Department of Peacekeeping Operations.

Spokesman Nick Birnback told reporters in New York that Gbagbo's forces have consistently used heavy weapons against civilians and peacekeepers in recent days. He says the action was taken according to the mandate the mission has from the U.N. Security Council.

The especially strong resolution passed last week by the council condemned "in the strongest terms the recent escalation of violence throughout the country which could amount to crimes against humanity."

The unanimous resolution also stressed the council's "full support" for the U.N. peacekeeping force in Ivory Coast "to use all necessary means to carry out its mandate to protect civilians under imminent threat of physical violence ... including to prevent the use of heavy weapons against the civilian population."

Frederic Daguillon, the spokesman for the French force Licorne protecting civilians in Ivory Coast said earlier Monday on France-Info radio that the total French military presence in the former French colony is 1,650.

Residents in two different districts in northern Abidjan reported seeing soldiers advancing into the city. Thousands of troops had been amassing outside Ivory Coast's commercial capital since last week, readying for the final battle to topple Gbagbo and install Ouattara.

Alain Lobognon, a spokesman for Ouattara's defense minister, confirmed by telephone that the general offensive had begun Monday afternoon.

Their target is the presidential palace and the mansion where Gbagbo is believed to be holed up. Both are located on the edges of a lagoon in the heart of the country's biggest city.

Explosions came from the city's downtown core, in the direction of the palace and a large military base. Machine gunfire erupted on the lagoonside highway just two blocks from the palace.

International observers and governments around the world backed the results issued by Ivory Coast's electoral commission showing Ouattara had won the November presidential election, but Gbagbo refused to give up power after a decade in office.

The two men have vied for the presidency for months, with Ouattara using his considerable international clout to financially and diplomatically suffocate Gbagbo.

After the final round of diplomatic efforts had failed, forces backing Ouattara launched a dramatic offensive last week, with forces loyal to him seizing control of the administrative capital and other towns before heading toward Abidjan.

Associated Press writers Jenny Barchfield in Paris and Anita Snow at U.N. headquarters in New York contributed to this report.