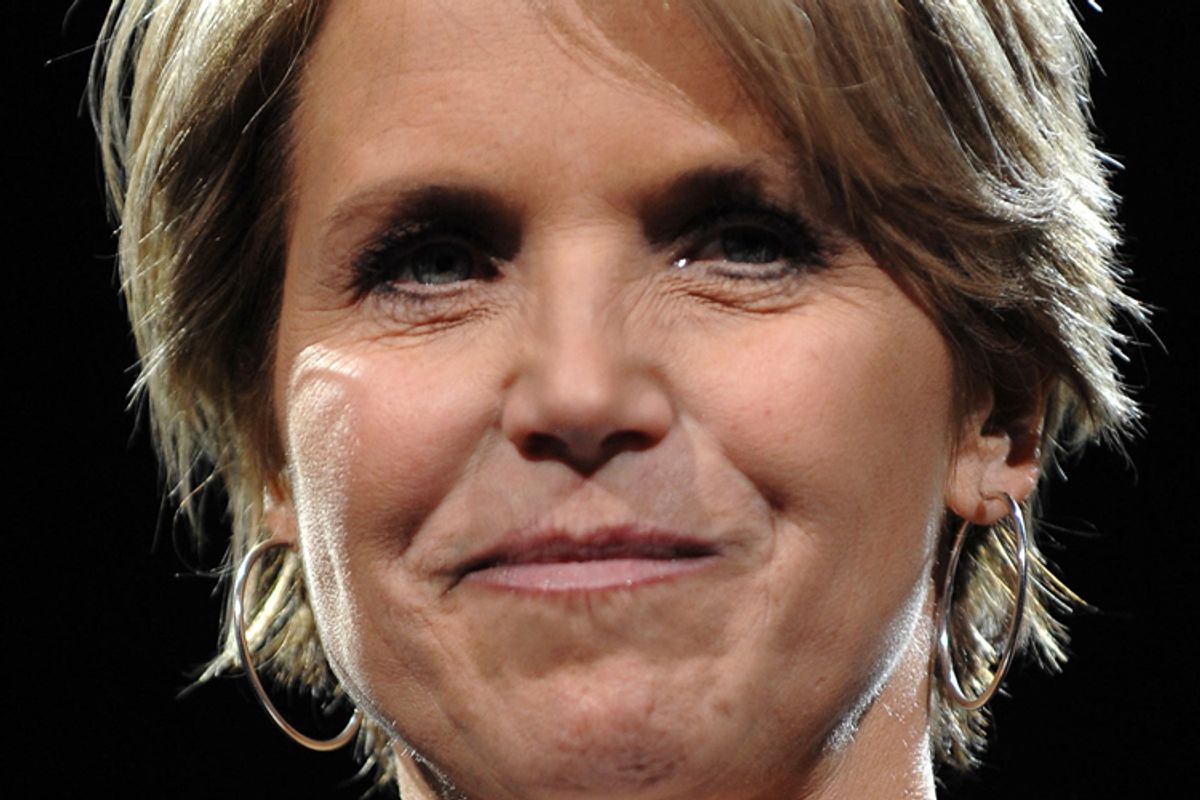 Katie Couric was always an outside-the-box choice for CBS news anchor. Following in the gravitas-filled footsteps of Walter Cronkite and Dan Rather, Couric was a morning news veteran, a woman to whom the adjectives "perky" and "cute" have been applied more times than Lindsay Lohan has been called "troubled."

So perhaps it was not entirely surprising Monday when the Associated Press reported that a CBS network executive confirmed that the anchor, whose CBS Evening News is trailing at third in the ratings, will be leaving the network when her five year contract expires in June.

Is the anonymous tipster just a classic decoy, designed to test the waters of public opinion before Couric and the network get down to negotiations? CBS News spokeswoman Sonya McNair said Sunday, "We have no announcements to make at this time. Until we do, we will continue to decline comment on rumor or speculation," and Couric's own spokesman likewise declined to comment.

But unlike so much of what comes down the rumor mill, the notion of Couric beating a hasty exit out of the Tiffany Network has the convincing ring of truth. Couric made history back in 2006 when she became the first woman to single-handedly anchor a nightly network news broadcast, a move considered unusual, largely because of her upbeat "Today" show personality.

And while Couric is a far more competent and knowledgeable journalist than she gets credit for – her effortless, idiocy-exposing interviews with Sarah Palin were a highlight of the 2008 election – the past few years have borne out that she's also a newswoman whose distinctly human touch makes her better suited to the field than to the chair. Couric, unlike the self-deprecating, slow-jamming-to-the-news Brian Williams possesses a quickness and a warmth historically unique in the troika of network talking heads. She's more like the always-up-for-getting-emotional Anderson Cooper, a man who shines best when firing questions at interviewees or pulling together impassioned reports from the scene of a breaking story. And it's hard to imagine Diane Sawyer unselfconsciously dispensing wet willies in an "investigative report" on shaking the sillies out.

So where would Couric, who was chastised by David Letterman last month for copping to the fact that she's "figuring out what I want to do and figuring out the future," go next? Despite Letterman's insistence that "Once you take that chair, that's what you do," Couric, who cheerfully countered, "Is that CBS law?" has a number of possibilities. She admitted in an interview for next Sunday's New York Times that she and Jeff Zucker "talk a lot and, yes, we’ve been discussing the possibilities" of a talk show for 2012 that would be a place "for smart conversation."

Couric has, for her entire career, had to figure out how to deftly wear the persona that her audience responds to – that friendly disposition that helped make her a news star – while fighting off the criticism that an anchor must resemble God in full commandment-delivering mode. In her Times interview, she dismisses the charge of not possessing gravitas by calling the word "Latin for 'testicles,' by the way" and admitting she's bristled at the "sexist undertone" of being categorized as "perky." "It meant shallow and cute, but not somebody who had any depth," she says.

Depth doesn't have to come at the expense of humanity – far from it. If and when she leaves, it won't be with her perky tail between her legs. The real question is why evening news viewers are still so reluctant to accept someone a little looser delivering the big stories of the day. And though Couric admits, "We probably would have been better off playing it a little safer," it seems she's ready to redefine "better off." She certainly seemed to be dropping a big clue to her next move when she told Hemispheres magazine this month that, "I sometimes miss the connection I had with 'Today' Show viewers, because I was very much myself. I could be spontaneous. People felt like they knew me because they sort of did." In her long career in the public eye, viewers have indeed come to know Couric – and not as someone who couldn't take the "CBS Evening News" out the dumpster, but as a competent journalist with a distinctive set of talents. That's why to those of us who admire what she does so well, the idea that she might be "better off" talking to people instead of dispensing headlines isn't news at all.