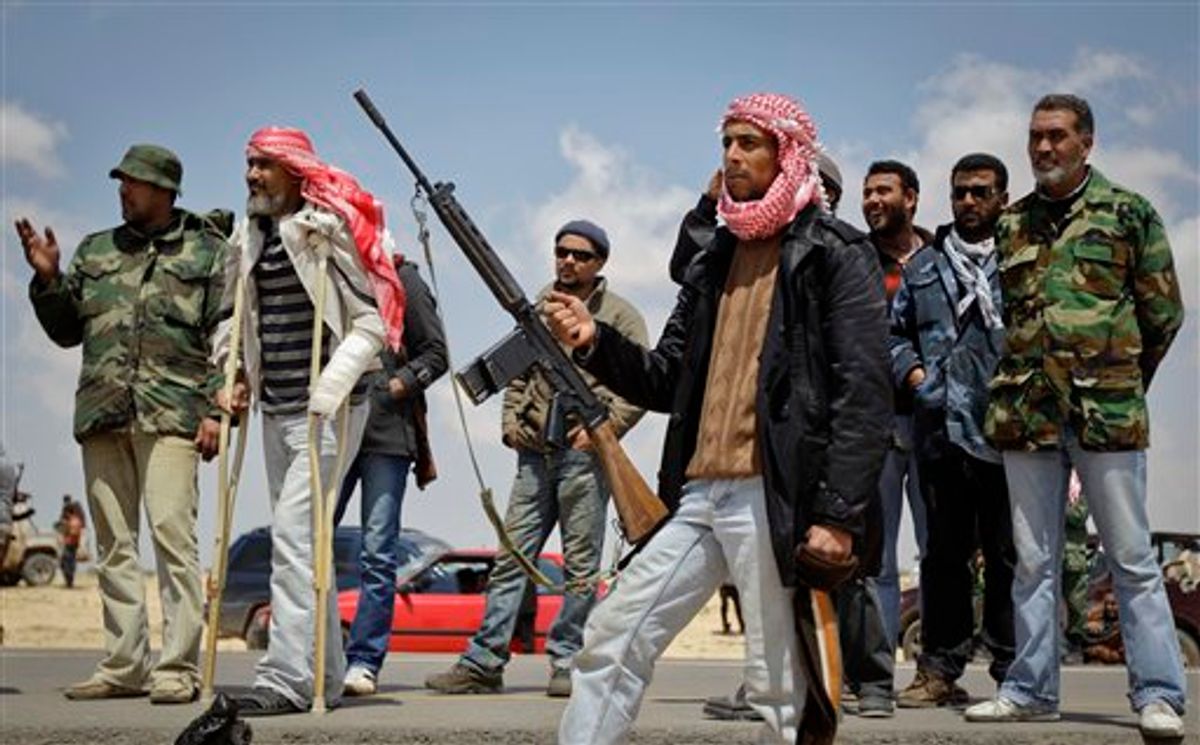 Rebel fighters, one on crutches, are seen near the front line east of Brega, Libya, Sunday, April 3, 2011. The Libyan rebel movement that controls the country's eastern half wants to install a parliamentary democracy across the country once they topple the regime of longtime ruler Moammar Gadhafi, according to Abdel-Hafidh Ghoga, vice chairman of the National Provisional Council. (AP Photo/Ben Curtis) (AP)
--

An envoy of Moammar Gadhafi told Greece's prime minister Sunday that the Libyan leader was seeking a way out of his country's crisis two weeks after his government's attacks to put down a rebellion drew international airstrikes, Greek officials said.

Abdul-Ati al-Obeidi, a former Libyan prime minister who has served as a Gadhafi envoy during the crisis, will travel next to Turkey and Malta in a sign that Gadhafi's regime may be softening its hard line in the face of the sustained attacks.

"From the Libyan envoy's comments it appears that the regime is seeking a solution," Greek Foreign Minister Dimitris Droutsas said in a statement after the meeting in Athens.

The foreign minister said the Greek side stressed the international community's call for Libya to comply with the U.N. resolution that authorized the airstrikes and demanded Gadhafi and the rebels end hostilities.

The message, Droutsas said, was: "Full respect and implementation of the United Nations decisions, an immediate cease-fire, an end to violence and hostilities, particularly against the civilian population of Libya."

Gadhafi's government has declared several cease-fires but has not abided by them.

Few other details of the Athens talks were released publically.

On Friday, the Libyan envoy had said Gadhafi's government was attempting to hold talks with the U.S., Britain and France in an effort to halt the international airstrikes that began March 19 and which have pounded Libya's troops and armor and grounded its air force.

Gadhafi's superior forces had been close to taking the rebel capital of Benghazi in eastern Libya before the international military campaign.

Rebel forces made up of defected army units and armed civilians have since seized much of Libya's eastern coast, but have been unable to push westward toward the capital, Tripoli.

On Sunday, Gadhafi's forces pressed on with attacks against Misrata, the last key city in the western half of the country still largely under rebel control despite a weeks-long assault.

Government troops besieged civilian areas for around two hours Sunday morning with Grad rockets and mortar shells and lined a main street with snipers, said a doctor in the city.

Two shells landed on a field hospital, killing one person and injuring 11, he said. The attacks, including tank fire, began again after nightfall, he said. He did not want to be identified by name out of fear for his security.

A Turkish ship carrying 250 wounded from Misrata docked in Benghazi Sunday. The boat, which carried medical supplies, was also expected to pick up around 60 wounded people being treated in various hospitals in Benghazi, as well as 30 Turks and 40 people from Greece, Ukraine, Britain, Uzbekistan, Germany and Finland.

A leader of the rebel movement, meanwhile, sought to ease concerns from Western governments about its character and goals, emphasizing in an interview that the rebels will not allow Islamic extremists to hijack their plans to install a parliamentary democracy in place of Gadhafi's four-decade rule.

The issue takes on added importance as Western officials debate whether to send the rebels weaponry in an attempt to help them gain the upper hand over Gadhafi's superior troops.

"Libyans as a whole -- and I am one of them -- want a civilian democracy, not dictatorship, not tribalism and not one based on violence or terrorism," said Abdel-Hafidh Ghoga, vice chairman of the opposition's National Provisional Council.

The council, based in Benghazi, was formed to represent the opposition in the eastern Libyan cities that shook off control of the central government in a series of popular uprisings that began Feb. 15.

In Washington, the chairman of the Intelligence Committee in the House of Representatives was among several key lawmakers cautioning that the U.S. and its allies needed to know much more about the rebel forces before providing them with weapons.

Mike Rogers, a Republican from Michigan, said on NBC television's "Meet the Press" that there may be strains of al-Qaida within the rebel ranks and the NATO-led coalition in the campaign against Gadhafi should proceed with caution before arming them.

Libya's opposition has said any extremists among their ranks would be few in number, and Gadhafi's own punishing campaigns crushed Islamic militants in the country years ago.

British Foreign Secretary William Hague said Sunday that his country would neither arm the rebels nor send ground troops to Libya.

"We have taken no decision to arm the rebels, the opposition, the pro-democracy people -- whatever one wants to call them," he told the BBC.

A British diplomatic team arrived Saturday in the rebels' de facto capital of Benghazi to speak to members of the opposition council to learn more about their aims, British officials said Sunday.

Other fighting Sunday was concentrated around the strategic oil town of Brega, as it has been repeatedly during weeks of back-and-forth battling along Libya's eastern coast. The rebels, backed by airstrikes, made incremental advances.

In Tripoli, an opposition supporter said Sunday that anxiety was spreading in areas of the capital as dozens of people disappear in pre-dawn raids, apparently carried out by Gadhafi's security apparatus.

"They pick them up from their houses and they disappear. We don't know if they're still alive or dead," said the activist who spoke on condition he not be identified to avoid arrest.

He also described the city as being locked down, saying many people were staying at home, shops were closed and hundreds of cars were lining up for hours at gas stations as people hoard supplies.

The U.S. was to have stopped flying strike missions in Libya as of Sunday after it passed control of the air operation to NATO last week. But alliance spokeswoman Oana Lungescu said the U.S. approved a request to extend that role until Monday because of "poor weather conditions over the last few days." She did not elaborate.

Becatoros reported from Athens. Ryan Lucas in Brega, Libya; Hadeel al-Shalchi in Tripoli, Libya; and Diaa Hadid in Cairo contributed to this report.