The impotence of the loyal partisan voter

Rachel Maddow argues the Democratic Party seeks out ways to publicly kick its supporters. How can that be changed? 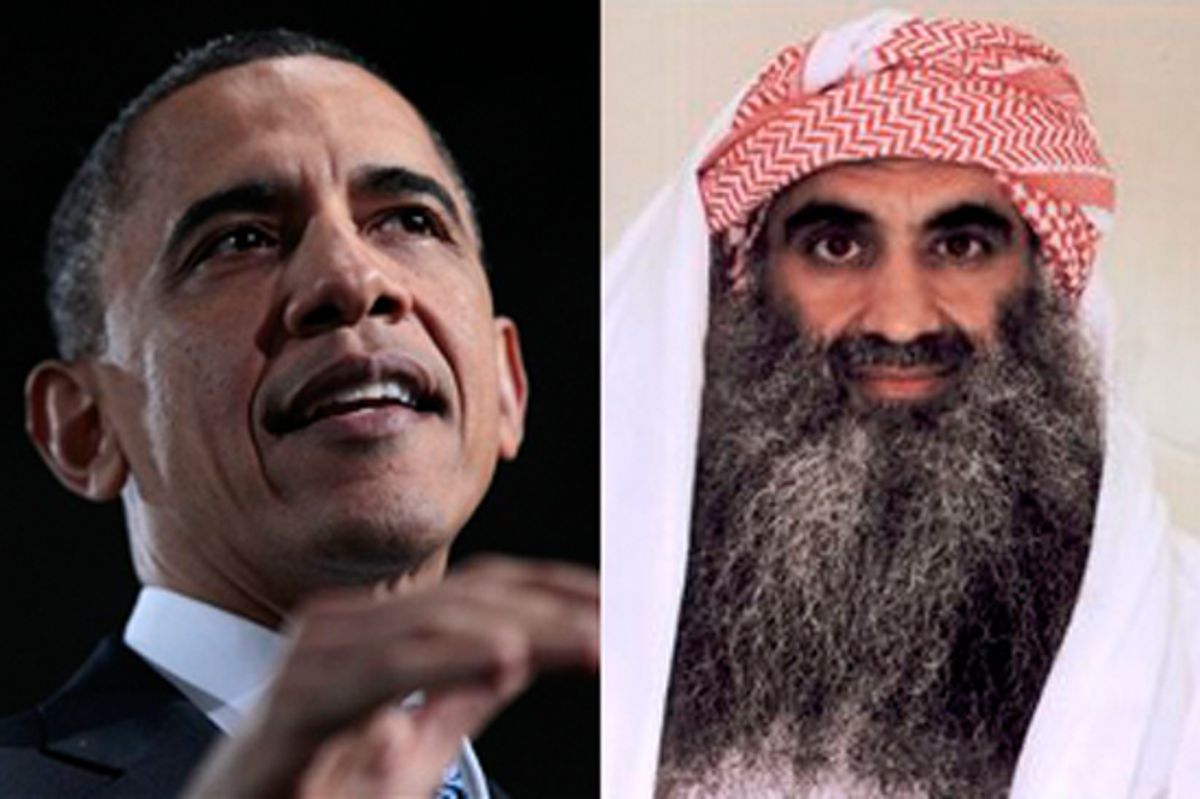 Left: President Barack Obama. Right: A photo downloaded from the Arabic language Internet site www.muslm.net and purporting to show a man identified by the Internet site as Khalid Sheik Mohammed
--

Rachel Maddow last night issued a very harsh and eloquent denunciation of Obama's decision to try Khalid Sheikh Mohammed before a military commission at Guantanamo rather than a real court. At the end of her monologue, Maddow focused on the contrast between how the Republicans treat their base and how Democrats treat theirs, specifically emphasizing that the White House announced this decision on the same day it kicked off Obama's re-election bid. About that point, Rachel said this:

A Democratic President kicks his base in the teeth on something as fundamental as civil liberties -- he puts the nail in the coffin of a civil liberties promise he made on his first full day in office -- and he does it on the first day of his re-election effort. And Beltway reaction to that is. . . huh, good move. That's the difference between Republican politics and Democratic politics. The Republicans may not love their base, but they fear them and play to them. The Democratic Party institutional structures of D.C., and the Beltway press in particular, not only hate the Democratic base -- they think it's good politics for Democratic politicians to kick that base publicly whenever possible.

Only the base itself will ever change that.

How will that happen? How can the base itself possibly change this dynamic, whereby politicians of the Democratic Party are not only willing, but eager, to "kick them whenever possible," on the ground (among others) that doing so is good politics? I'd submit that this is not only one of the most important domestic political questions (if not the most important), but also the one that people are most eager to avoid engaging. And the reason is that there are no comforting answers.

One thing is for certain: right now, the Democratic Party is absolutely correct in its assessment that kicking its base is good politics. Why is that? Because they know that they have inculcated their base with sufficient levels of fear and hatred of the GOP, so that no matter how often the Party kicks its base, no matter how often Party leaders break their promises and betray their ostensible values, the base will loyally and dutifully support the Party and its leaders (at least in presidential elections; there is a good case that the Democrats got crushed in 2010 in large part because their base was so unenthusiastic).

In light of that fact, ask yourself this:  if you were a Democratic Party official, wouldn't you also ignore -- and, when desirable, step on -- the people who you know will support you no matter what you do to them? That's what a rational, calculating, self-interested, unprincipled Democratic politician should do:  accommodate those factions which need accommodating (because their support is in question), while ignoring or scorning the ones whose support is not in question, either because they will never vote for them (the hard-core right) or will dutifully canvass, raise money, and vote for them no matter what (the Democratic base).  Anyone who pledges unconditional, absolute fealty to a politician -- especially 18 months before an election -- is guaranteeing their own irrelevance.

It was often said that Bush/Cheney used fear as their principal political weapon -- and they did -- but that's true of the Democratic Party as well. When it comes to their base, Democratic leaders know they will command undying, unbreakable support no matter how many times they kick their base, because of the fear that has been instilled in the base -- not fear of Terrorists or Immigrants (that's the GOP's tactic), but fear of Sarah Palin, the Kochs and the Tea Party. Rachel herself made this point quite well before the 2010 election:

It may be that this fear of Republicans is rational (or, given how many GOP-replicating policies and practices the Democrats embrace, maybe it isn't).  But whatever else is true, one thing is for certain: dedicated partisans who pledge their unbreakable, eternally loyal support for any Party or politician are going to be steadfastly ignored (or worse) by that Party or politician, and rightfully so. If you spend two years vehemently objecting that certain acts so profoundly offend your principles but then pledge unequivocal support no matter what almost two years in advance to the politicians who engage in them, why would you expect your objections to be heeded? Any rational person would ignore them, and stomp on your beliefs whenever doing so benefited them.

I'm not saying I know the answer.  Joan Walsh yesterday urged progressives not to organize for Obama until next year while nonetheless vowing to support his re-election, which (though well-intentioned) strikes me as merely reinforcing this dynamic. But what I do know is that Rachel's optimistic proclamation that "only the base itself will ever change" this dynamic cannot be fulfilled without giving the Party and its leaders a true reason to pay attention or care about disenchantment (and, some day, to fear alienating their base). For those who are hopeful that this will happen, what do they envision will cause it? What would ever make Democratic Party leaders change how they view this dynamic?

In Slate, the normally rhetorically restrained Dahlia Lithwick has a superb article condemning Obama's decision on the KSM trial as "appalling, cowardly, stupid and tragically wrong."  Indeed, as I've documented before -- virtually every country that suffers horrible Terrorist attacks -- Britain, Spain, India, Indonesia -- tries the accused perpetrators in its regular court system, on their own soil, usually in the city that was attacked.  The U.S. -- Land of the Free and Home of the Brave -- stands alone in being too afraid to do so.

Related to that:  the notion that political opinion in America would not allow Obama to do anything differently on these issues is empirically disproven; he ran on a platform of opposing all the measures he now supports and won decisively.  By itself, that proves that -- when these debates are engaged rather than conceded -- these positions are politically sustainable.  Obama adopts Bush Terrorism policies because he wants to and has no reason not to -- not because doing so is a political necessity.

Finally -- and as is usually true for this excuse -- the notion that "Congress made him do it" is totally false: aside from the fact that the Obama administration long ago announced that it would retain the military commission system, the White House -- long before Congress acted to ban transfers of detainees to the U.S. -- removed decision-making power from the DOJ in the KSM case and made clear it would likely reverse Holder's decision.  As The Atlantic's Andrew Cohen notes:

Long before the formal "restrictions" came into place on Capitol Hill, the Justice Department could have forced the issue in Congress by bringing Mohammed to trial in the U.S. Even recently, it could have asked the courts to broker the fight between the executive and legislative branches over the fate of the men. It could have put the heat on truculent local politicians. But the feds chose to avoid all of those fights until it was too late. One day, perhaps, we'll really know why.

The Congressional ban is the excuse, not the cause.