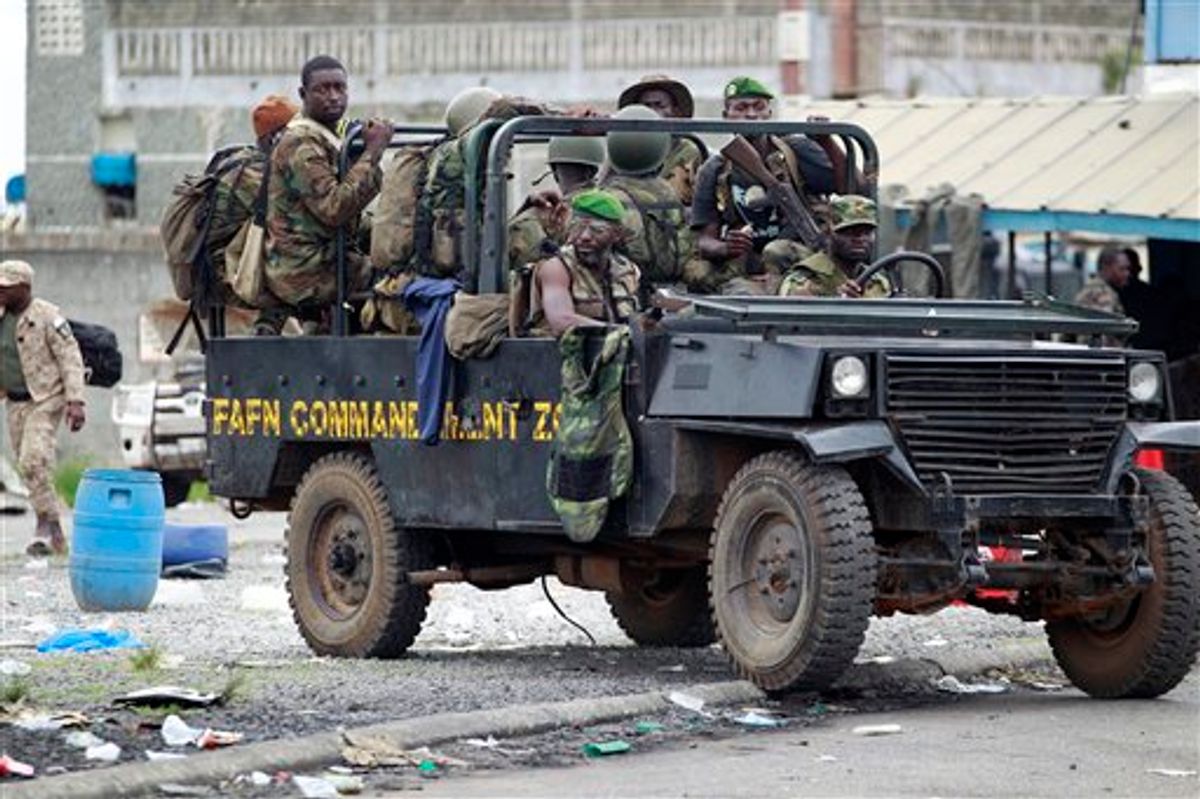 New Forces soldiers loyal to Alassane Ouattara drive at a checkpoint at one of the principal entrances to Abidjan, Ivory Coast, Tuesday, April 5, 2011. Ivory Coast's entrenched strongman Laurent Gbagbo huddled in a bunker at his home and was exploring different options for his surrender, officials said Tuesday, as forces backing the country's democratically elected leader seized the residence.(AP Photo/Rebecca Blackwell) (AP)
--

Ivory Coast's strongman leader Laurent Gbagbo holed up in a bunker inside the presidential residence Tuesday, defiantly maintaining he won the election four months ago even as troops backing the internationally recognized winner encircled the home.

Gbagbo's comments by telephone to France's LCI television came as French officials and a diplomat said he was negotiating his departure terms after French and U.N. forces launched a military offensive Monday. Democratically elected leader Alassane Ouattara has urged his supporters to take Gbagbo alive.

Talks about Gbagbo's departure terms were ongoing Tuesday evening directly between Gbagbo and Ouattara, according to a diplomat who spoke on condition of anonymity because he was not authorized to speak publicly.

France's foreign minister said Gbagbo would be required to relinquish power in writing after a decade as president, and must formally recognize Ouattara, the internationally backed winner of the November election that plunged the West African nation into chaos.

But Gbagbo showed no intention of leaving, declaring in his interview with French television, that Ouattara "did not win the elections" even though he was declared the victor by the U.N., African Union, United States, former colonial power France and other world leaders.

"I won the election and I am not negotiating my departure," Gbagbo said by telephone. The French channel said the interview was conducted by phone from his residence at 1730 GMT, and lasted about 20 minutes.

"One might think that we are getting to the end of the crisis," Hamadoun Toure, spokesman for the U.N. mission to Ivory Coast said by phone. "We spoke to his close aides, some had already defected, some are ready to stop fighting. He is alone now, he is in his bunker with a handful of supporters and family members. So is he going to last or not? I don't know."

Toure said that the U.N. had received phone calls Tuesday from the three main Gbagbo-allied generals, saying they were planning to order their troops to stop fighting.

"They asked us to accept arms and ammunition from the troops and to provide them protection," he said.

The offensive that began Monday included air attacks on the presidential residence and three strategic military garrisons, marking an unprecedented escalation in the international community's efforts to oust Gbagbo, as pro-Ouattara fighters pushed their way to the heart of the city to reach Gbagbo's home.

President Barack Obama said Tuesday he welcomed the role of the U.N. and French forces in Ivory Coast, also known by its French name Cote d'Ivoire.

"To end this violence and prevent more bloodshed, former President Gbagbo must stand down immediately, and direct those who are fighting on his behalf to lay down their arms," Obama said in a statement. "Every day that the fighting persists will bring more suffering, and further delay the future of peace and prosperity that the people of Cote d'Ivoire deserve."

Gbagbo refused to cede power to Ouattara even as the world's largest cocoa producer teetered on the brink of all-out civil war as the political crisis drew out, with both men claiming the presidency. Ouattara has tried to rule from a lagoonside hotel, while Gbagbo has stubbornly refused every olive branch extended to him.

On Tuesday, the African Union's Peace and Security Council again urged Gbagbo to cede power immediately to Ouattara "in order to curtail the suffering of the Ivorian people."

The French foreign minister said negotiations with Gbagbo and his family were ongoing.

"His adviser, Alcide Djedje, who is presented as his foreign minister, has arrived at the French Embassy and he's in the process of discussions on conditions of Gbagbo's departure," Juppe said from France.

Even before the offensive, postelection violence had left hundreds dead -- most of them Ouattara supporters -- and forced up to 1 million people to flee their homes.

Ivory Coast gained independence from France in 1960, and some 20,000 French citizens still lived there when a brief civil war broke out in 2002. French troops were then tasked by the U.N. with monitoring a cease-fire and protecting foreign nationals in Ivory Coast, which was once an economic star and is still one of the only countries in the region with four-lane highways, skyscrapers, escalators and wine bars.

Following four months of attempts to negotiate Gbagbo's departure, the U.N. Security Council unanimously passed an especially strong resolution giving the 12,000-strong peacekeeping operation the right "to use all necessary means to carry out its mandate to protect civilians under imminent threat of physical violence ... including to prevent the use of heavy weapons against the civilian population."