So long, "Lights Out" -- you coulda been a contender

FX's boxing series, "Lights Out," began with the promise of greatness -- but then things went increasingly wrong 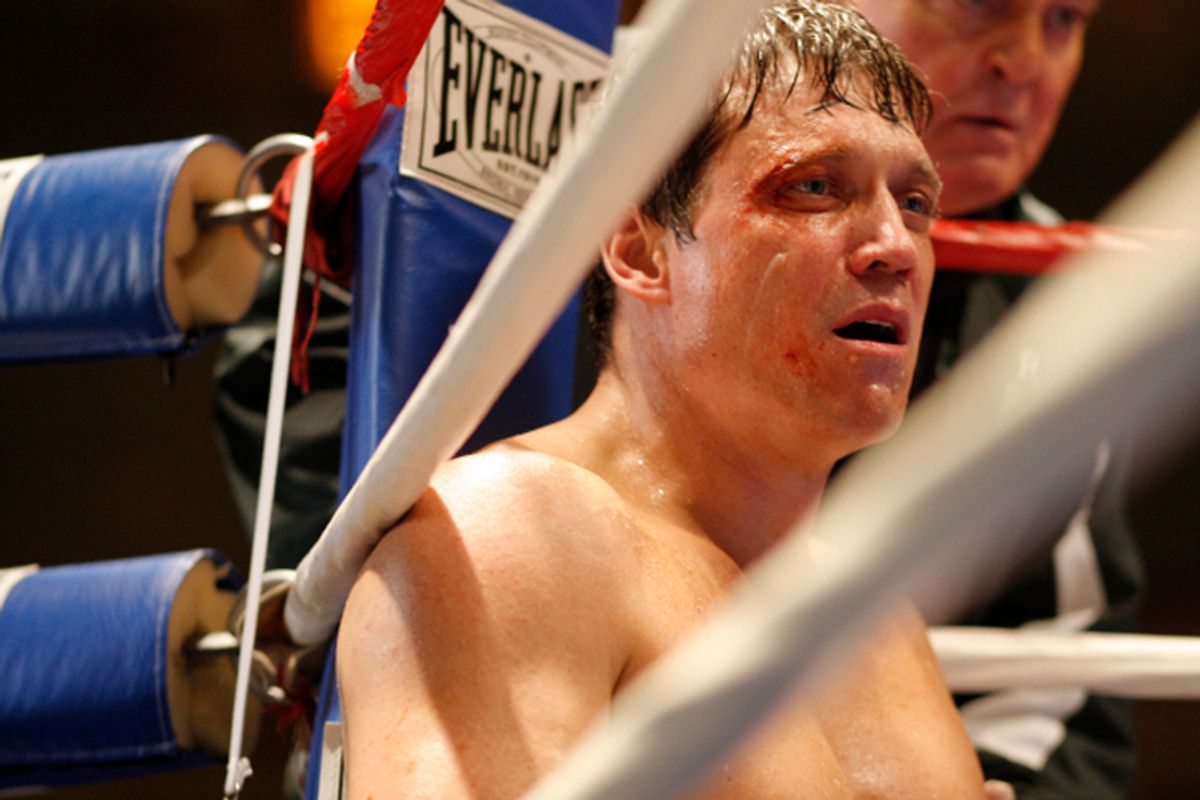 I had high hopes for "Lights Out." This FX drama about an aging former heavweight pushed back into the ring was a quirky collage of every boxing picture ever made, plus bits of crime thrillers that touched on boxing. There were echoes of "Rocky," "Raging Bull," "Requiem for a Heavyweight," "Don King: Only in America," "On the Waterfront" and "Body and Soul," plus details that seemed lifted from last week's sports pages. The first couple of episodes weren't great, but they had an appealing solidity, and when you watched them back-to-back, you could see that the writers had structured them carefully, introducing motifs and subplots that would prove important later. The show's third episode, "The Shot," was so strong that I wrote a whole column about it.

Ten weeks later, "Lights Out" is down for the count, cancelled before the end of its first season. Tonight at 10 PM/9 central it airs its 13th and final installment, "War" -- the episode in which Patrick "Lights" Leary (Holt McCallany) fights a rematch against Raymond "Death Row" Reynolds (Billy Brown).  It's a solid episode; the second half is excellent. I wish you were about to read a "This show wuz robbed!!" rant.

But the truth is, this series never delivered on its early promise. "Lights Out" wasn't robbed. It wasn't ready for prime time. Four big flaws did it in. Let's go to the videotape.

A film director once told me that he knew a screenplay needed rewrites when somebody asked him what it was about, and his description began with the phrase, "It's about this guy..." Scripts that are About This Guy can make unusual, sometimes engrossing stand-alone art house movies. But they don't make great TV shows.

Among other things, "The Sopranos" was about moral relativity, and gangsterism as a metaphor for life.  "Deadwood" was about creating civilization from chaos, and how chaos persists within civilization. "Six Feet Under" and "Rescue Me" were about the psychological impact of staring death in the face every day.

Yes, there were a lot of other things going on in those series. But they were never just About This Guy. They were never just about what happened, and who it happened to. They had a world view, a philosophy, an angle on life, and they expressed it in every scene -- sometimes subtly, sometimes hamfistedly, but it was always there; you could feel it.

"Lights Out" was an About This Guy show. The guy was Patrick "Lights" Leary, a  fighter who briefly held the heavyweight title but now was financially overextended by a big family and a suburban McMansion and a boxing gym he bought for his fight trainer dad (Stacy Keach). He didn't want to get back in the ring because he'd promised his wife, Theresa (Catherine McCormack), that he wouldn't, and because he'd secretly been diagnosed with fight-related Alzheimers'. He spent the first half of the season trying to make his monthly nut by training other fighters and doing odd, illegal "muscle" jobs for a local crime boss, and ... Would you like to reach for your drool cup now, or wait until I get to the part about Lights' oppressive contract with a Don King-like promoter (Reg E. Cathey)?

I thought so. Moving on, then.

Problem #2. The Guy never quite made sense

I like Holt McCallany. He's a strong, simple, old-fashioned actor. If this were 1948, he'd have a studio contract and would make a good living playing soldiers or kindly beat cops or guys who don't get the girl. But I got tired of seeing him at the center of almost every scene in "Lights Out." He wasn't magnetic and complicated enough to carry a hard-edged, sometimes explosively violent cable show. I blame the producers more than I blame McCallany, who did fine work in a poorly written part that might have been wrong for him regardless.

The actor lacked the edge of animal menace necessary to allow viewers to rationalize Lights' violent improvisations -- like when you're watching a Sean Penn or Mickey Rourke or Russell Crowe movie, and the supposedly goodhearted hero does some wild, Neanderthal stuff, and you justify it because the star radiates instability. Whenever Lights lost his temper and used his fists against someone who challenged his authority (there was a disturbing scene early in the season where one of Lights' daughters slammed her bedroom door and he started beating on it) the directors gave us visual intimations of Scorsese-like male rage (signified by flash cuts that were like synapses firing in Lights' subconscious). But they didn't jibe with McCallany's demeanor elsewhere on the show. The lead seemed miscast, or misdirected, or not thoroughly imagined by the writers. Something was off.

We should have been scared, excited, and infuriated by Lights' machismo -- the way he kept financial and medical details from his wife, Theresa, and the way he'd unilaterally decide to settle a dispute beyond the ring with his fists, bypassing negotiation. Instead he just seemed inconsistently written, lacking the psychological connective tissue that allowed us to make sense of the huge contradictions in, for example, Seth Bullock on "Deadwood," another decent man with an explosive temper.

In last week's episode, when Lights knocked down the door of the motel room where his conniving mother (Valerie Perrine) was staying and broke the wrist of her drummer boyfriend, I didn't think, "Lights is a macho idiot who unfortunately is behaving according to type -- I saw this coming," which is how I would have reacted if watching a better-cast or more carefully written show. Instead I thought, "I don't believe Lights would go berserk and commit criminal assault on the eve of his big comeback fight," and worse, "I don't believe that this good-hearted lug who earns a living with his hands would so cavalierly destroy the career of another man who makes a living with his hands." If Lights adored his mother, then sure, maybe; but he didn't even like her.

Tony Soprano lost his head and went on rampages all the time on "The Sopranos." Jake LaMotta did it in "Raging Bull." Because I believed the characters, I believed their actions. I didn't believe in Lights' character in the temper-tantrum scenes of "Lights Out," so his actions seemed more like cliched movie tough guy affectations than credible psychological flaws.

Problem #3. The narrative should have stuck closer to the fights

The first and only season of "Lights Out" was a long march toward Lights' rematch with "Death Row" Reynolds -- a structure that should have given it a steady tension and bursts of propulsive energy. The most exciting part of any boxing story is the run-up to the match and the match itself -- the decision to fight, the training and sparring, and the inevitable showdown capped by a win or loss. There were three major fights -- the one involving Lights and Pops' protege Omar Assarian (Pedro Pascal), the one between Lights and Javier 'El Diablo' Morales (Gavin-Keith Umeh), and tonight's rematch. These three fights should have been the clotheslines on which the season's other events were strung.

But there was too much meandering between fights and in the lead-up to fights, and too many zig-zaggy detours -- the cage fight episode; Lights getting stabbed and indicted; the intriguing but ultimately pointless arc with Pops qutting and being temporarily replaced by the unhinged trainer Ed Romeo (Eamonn Walker); that incredibly irritating 12th episode where Lights' no-good mother reappeared and every major character had to pause on the eve of the rematch to deal with her manipulative, whiny, narcissistic, swindling ass. As Todd VanDerWerff noted, "At some point, 'Lights Out' turned into 'guest star theatre.'”

The only one of these indulgences that I liked was David Morse's turn as Jerry "The Rainmaker" Raines, a brain-damaged ex-champ who showed Lights what he might become if he didn't stop boxing. That subplot spoke to the heart of Lights' character.

The rest of the show's detours felt like the sorts of indulgences you might tolerate in the second or third season of an ambitious, eccentric drama. First seasons should move like the sharks that Ed Romeo described in Episode 9, "In Fight": "No wasted energy. Just one vicious strike."

Even in tonight's episode -- the season and series finale! -- there are long stretches where none of the characters seem properly focused on the supposedly critical rematch. They're preparing for a sports event that will alter all of their destinies forever, yet they mosey along as if they're getting errands done before going on vacation.

I liked Lights' good-hearted trainer father, Pops. I got a kick out of Lights' slimy, hustling, horndog brother, Johnny (Pablo Schreiber). I understood and empathized with Lights' wife, Theresa, who loved and supported him even though he kept her in the dark about their precarious financial status and went back on his promise not to box again. I was amused by Lights' greedy, manipulative, motormouthed promoter, Barry K. Word. And I was engaged by Hal Brennan (Bill Irwin), the local crime boss who spread his tentacles into every corner of Lights' life, and whose true motives were hard to discern.

But none of these characters ever quite rose above B-movie stereotype. The names told you what you needed to know about them, and the writing rarely dug deeper. When is a self-destructive bad boy not named Johnny? When is the crusty old trainer not nicknamed "Pops"? What boxing promoter in a post-1980s films is not modeled on Don King?

The most conspicuous failure by far was Theresa, who never became more than a stand-by-your-man cipher. The English actress' Catherine McCormack's unsteady American accent was only a small part of the problem; if she'd been given a more interesting character to play (or if she'd been written as an English immigrant) it wouldn't have mattered. The scripts were to blame. The show justified Theresa's near-total ignorance of her husband's secret shenanigans in a scene early this season (apparently Lights wooed her and won her she was not yet 20 and had no life experience to speak of), but failed to develop this thread in ways that illuminated her personality and her marriage to Lights.

It's possible to breathe startling new life into corny characters and situations. On paper, every character on "The Sopranos" originated as a gangster movie stereotype. But you couldn't reduce Tony or Christopher or Carmela or Adriana or Uncle Junior or any other major character on that great series to a phrase or two. They were as maddeningly complex as real people. Great characters always are.

If "Lights Out" had committed to B-movie cliches and served them up with relish, it wouldn't have mattered that its supporting characters had, at best, two dimensions. But "Lights Out" seemed to want to have it both ways -- to be a 1940s B-movie and be a down-to-earth drama about modern boxing and crime, with plausible psychology and real-world details about the sport.  It didn't manage either mode as well as it should have, so it remained fundamentally unsatisfying even when it staged good scenes and sequences.

Tonight's finale has some memorable lines, images and performances, and a realistically nasty, awkward fight. And the penultimate scene -- which I wouldn't dare ruin here -- ends with a sign-off line that's chillingly perfect. But it's just not enough to shake the bitter memory of all those wasted chances at greatness.  The plucky underdog got a title shot and blew it.