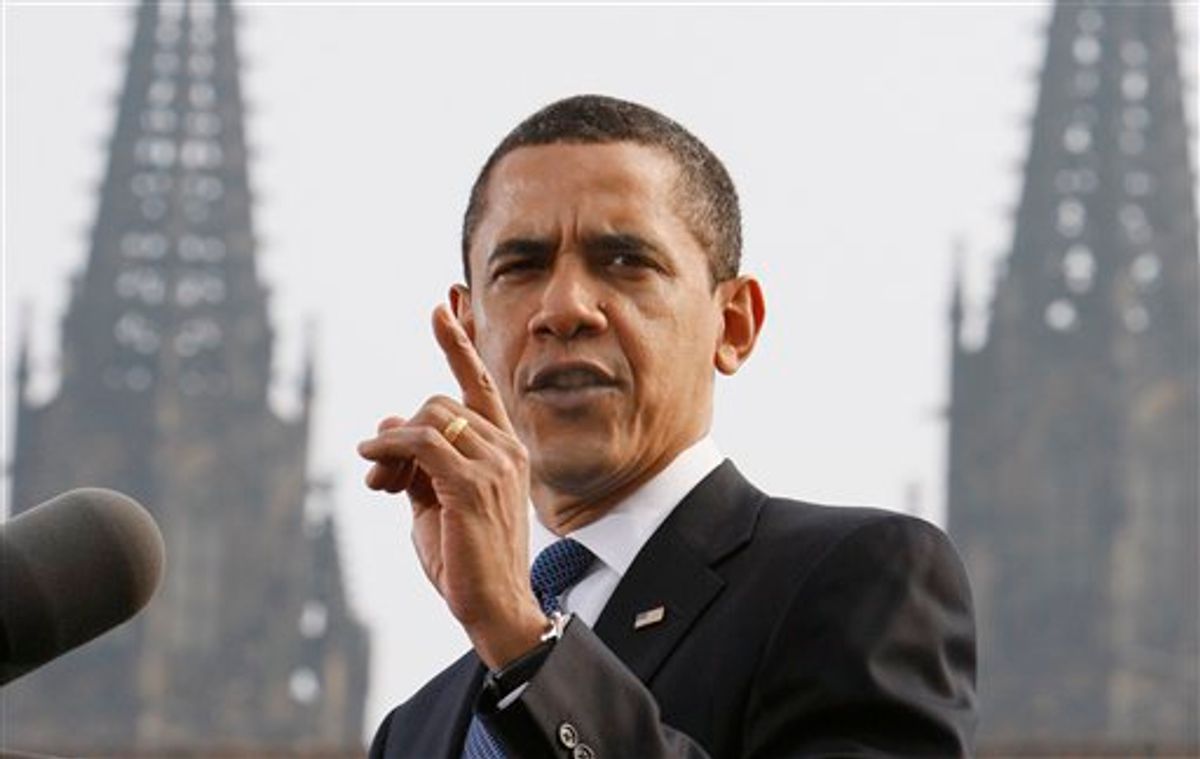 FILE - In this April 5, 2009, file photo President Barack Obama addresses a crowd in Prague. Obama offered what would be a defining moment of his presidency: a pledge to seek a world without nuclear weapons. He outlined specific steps to reach that goal. Two years later, he has delivered on some of his promises, while other goals appear stalled. (AP Photo/Charles Dharapak, File) (AP)
--

President Barack Obama has summoned the top Republican in Congress to the White House on Tuesday for talks aimed at averting a government shutdown this weekend.

Negotiations have stalled on legislation blending immediate spending cuts with the money required to run federal agencies through the end of September. Democrats are accusing the GOP of pressing harmful spending cuts and attaching a social policy agenda to the must-pass spending bill. House Speaker John Boehner counters that the White House is pressing gimmicky budget cuts.

On a separate long-term track, Republicans controlling the House have fashioned plans to slash the budget deficit by more than $5 trillion over the upcoming decade, combining unprecedented spending cuts with a fundamental restructuring of taxpayer-financed health care for the elderly and the poor.

In an op-ed in Tuesday's editions of The Wall Street Journal, Ryan estimated the proposed Republican budget cut at $6.2 trillion over 10 years. And he said later in a nationally broadcast interview that lawmakers must find a way to come to grips with the financially ailing Medicaid and Medicare programs, which Ryan called "the drivers" of the federal debt.

While Ryan said that over the coming decade, his budget would slash $6.2 trillion from Obama's spending proposals, the savings as measured against the Congressional Budget Office "baseline" would be less.

And if Ryan follows past practice, he'll adopt Obama's assumption that overseas military operations will soon cost just $50 billion a year rather than current levels that are roughly three times that amount. Some have challenged such an assumption as unrealistic.

Ryan's program also includes a controversial proposal to convert the traditional Medicare program for the aged into a system by which private insurers would operate plans approved by the federal government.

Current Medicare beneficiaries or workers age 55 and older would stay in the existing system.

At the same time, Republicans propose to sharply cut projected spending on the Medicaid state-federal health program for the poor and disabled and transform it into a block grant program that gives governors far less money than under current estimates, but considerably more flexibility.

GOP officials requiring anonymity to discuss the budget before its release Tuesday said more than $1 trillion in savings would come from Medicaid.

Spending on hundreds of domestic programs -- the accounts at the heart of the talks to avoid a government shutdown -- would be returned to levels at or below those in effect in 2008, producing savings of hundreds of billions of dollars.

Ryan's goal for tax reform calls for a top tax rate of 25 percent for both individuals and corporations, down from the current top rate of 35 percent for both. That would mirror a proposal by Rep. Dave Camp, R-Mich., chairman of the tax-writing House Ways and Means Committee. Ryan embraces the popular goal of simplifying the tax code.

Boehner has ordered up a weeklong stopgap bill to prevent a shutdown. That proposal includes $12 billion in immediate spending cuts and enough money to operate the Pentagon through the end of September.

However, Republicans on Monday disclosed plans to instruct lawmakers "on how the House would operate in the event Senate Democrats shut down the government." And the Obama administration advised government agencies to take the proper steps to prepare for a shutdown.

In a memo to agency officials, the deputy director of the Office of Management and Budget, Jeffrey Zients, urged agency heads to refine and update contingency plans in the event negotiators don't strike a deal by Friday's deadline. The memo was first reported by The Washington Post.

Boehner has already orchestrated action by Congress to pass a pair of stopgap bills, so far cutting $10 billion from an estimated $1.2 trillion budget to fund the day-to-day operations of government through Sept. 30.

A one-week measure that cuts an additional $12 billion could reassure tea party-backed lawmakers who are among the most vocal in seeking to reduce the size and scope of the government. It could also put pressure on Democrats and the White House to offer greater spending cuts.

Under the decidedly arcane congressional budget process, the GOP plan is not actual legislation but provides a nonbinding, theoretical framework for future actions of Congress.

Boehner said in a statement that the $33 billion in current-year spending cuts cited by Democrats "is not enough, and many of the cuts that the White House and Senate Democrats are talking about are full of smoke and mirrors."

Ryan, the chairman of the House Budget Committee, said Tuesday the GOP isn't "looking for a government shutdown" but is serious about demanding cuts in spending to curb mounting federal deficits.

Interviewed on CBS's "The Early Show" Tuesday, Ryan predicted that a stopgap bill to keep the government running past a shutdown date at the end of the week will pass the House, but said he wasn't certain about the Senate. Ryan said the Republican-run House has passed three such emergency spending bills this year while the budget legislation has languished in the Senate.

Of GOP demands for billions in budget cuts, he said, "We're looking to get a down payment on this deficit reduction." He also said that lawmakers must come to grips with decisions on how to fix the financially troubled Medicare and Medicaid programs.

Meanwhile, the GOP's decade-long plan far exceeds the $1 trillion-plus reduction outlined in Obama's February budget plan and is on par with recommendations released by Obama's own bipartisan deficit commission in December.

Still, despite cuts already deemed draconian by Democrats, Ryan's plan can't claim a balanced budget by the end of the decade because of promises to not increase taxes or change federal retirement benefits for people 55 and over.