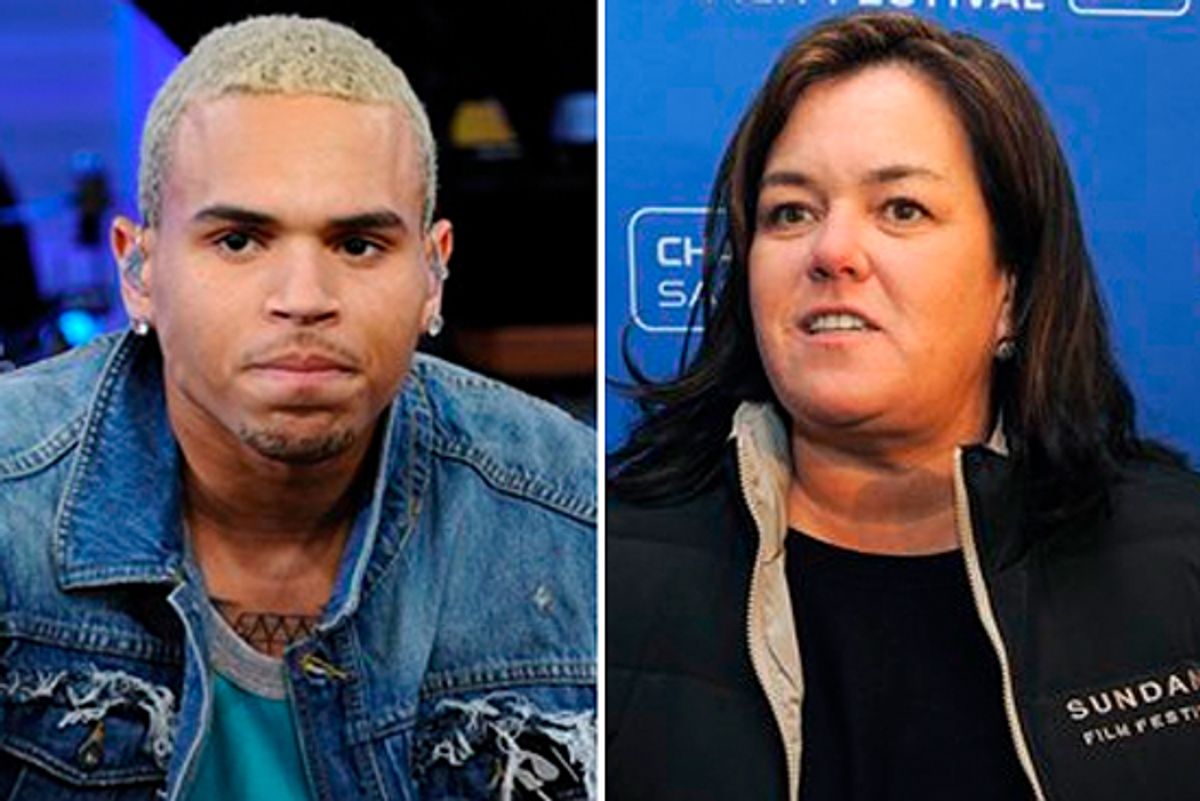 Is Chris Brown -- convicted felon, smasher of windows, ripper of shirts -- a "victim"? That's the verdict from no-stranger-to-controversy-herself comic and radio host Rosie O'Donnell, who took to Twitter Monday to follow up on last week's broadcast in which she opined, "I just don’t know why this kid seems to be held to a different standard than anyone else." "i have compassion for both he and rhianna - its is not a simple discussion - layers n layers… he is a victim too," she wrote. Compassion in an undeniably noble commodity, and it takes great strength and character to forgive those who've truly atoned for their actions. O'Donnell went on to say, "I do not condone it - I understand it," referring to Brown's own troubled history, one in which the deck of appropriate role modeling seems to have been stacked significantly against him.

Brown, whose parents divorced when he was young, has long claimed -- and his mother affirms -- that his stepfather was physically abusive. "He used to hit my mom ... He made me terrified all the time, terrified like I had to pee on myself," Brown told Giant magazine in 2007. "I remember one night he made her nose bleed…. I hate him to this day." (Brown's former stepfather Donnelle Hawkins has denied the accusations, saying Brown is trying to make him a "scapegoat.") He has lived his own very public experience of domestic abuse; two years ago he was charged with felony battery and took a plea deal after a violent dispute with then-girlfriend Rihanna.

Whatever the root causes of his actions, Brown, at the still very young age of 21, has certainly struggled to restrain his volatile personality -- and had to do it with all the pressures of international fame and constant media scrutiny. O'Donnell is not the only person to ask whether Brown, who himself tweeted (and then deleted) recently that "I'm so over people bringing this past shit up!!!!" is being excessively demonized as an abuser in a way that the Charlie Sheens and Mel Gibsons of the world are not.

Yet the issue for Brown -- whose success, by the way, has barely been dented throughout any of this -- is that he repeatedly demonstrates an inability to, as they say, "break the cycle" of unacceptable behavior. It's not "past shit" when he keeps acting out. Just one week after happily showing off his certificate of completion in a domestic violence program, Brown was taunting singer Raz-B as a "dick in da booty ass lil boy" on Twitter -- a spiteful jibe at a man who claimed he was sexually abused as a teenager. And then, two weeks ago, he famously went bananas after a tough interview with Robin Roberts on "Good Morning America," trashing his dressing room and shattering a window. Not that the "GMA" freakout slowed down his new album, "F.A.M.E.," one bit; it subsequently debuted at the top of the Billboard chart.

Is there room in the public's heart for what O'Donnell brands "compassion" toward a young man who obviously has a great deal of growing up to do, regardless of what his fancy domestic abuse program certificate of completion may say? Of course there is. But when O'Donnell said on her radio program that "I actually felt bad for Chris Brown during that interview and I felt mildly angry at Robin Roberts" and that she wishes she could ask her, "Can you take a look at this again and see if maybe you find in any way your responsibility in this?" she seems to be conveniently omitting any mention of Brown's responsibility as well. And frankly, at this point, I'm finding it harder and harder to feel too bad for a guy whose ridiculous tantrums keep getting rewarded in the form of television appearances and No. 1 albums.

Though O'Donnell says she's not condoning Brown's actions (she tweeted Monday that "no one I know thinks it's ok - I don't think it's ok - to understand how and y it happens is helpful to all"), a further acknowledgment of the wrongness of his shenanigans and of the obvious amount of work the guy's got to do would go a long way toward clarifying her point. Mercy is rare and necessary, but without justice and true changed behavior, it's meaningless.