Your recipes too good to be called "guilty" pleasures

Douse your cauliflower with cheese, pasta with eggs and pig, egg yolks with sugar, and never say, "Enough!" 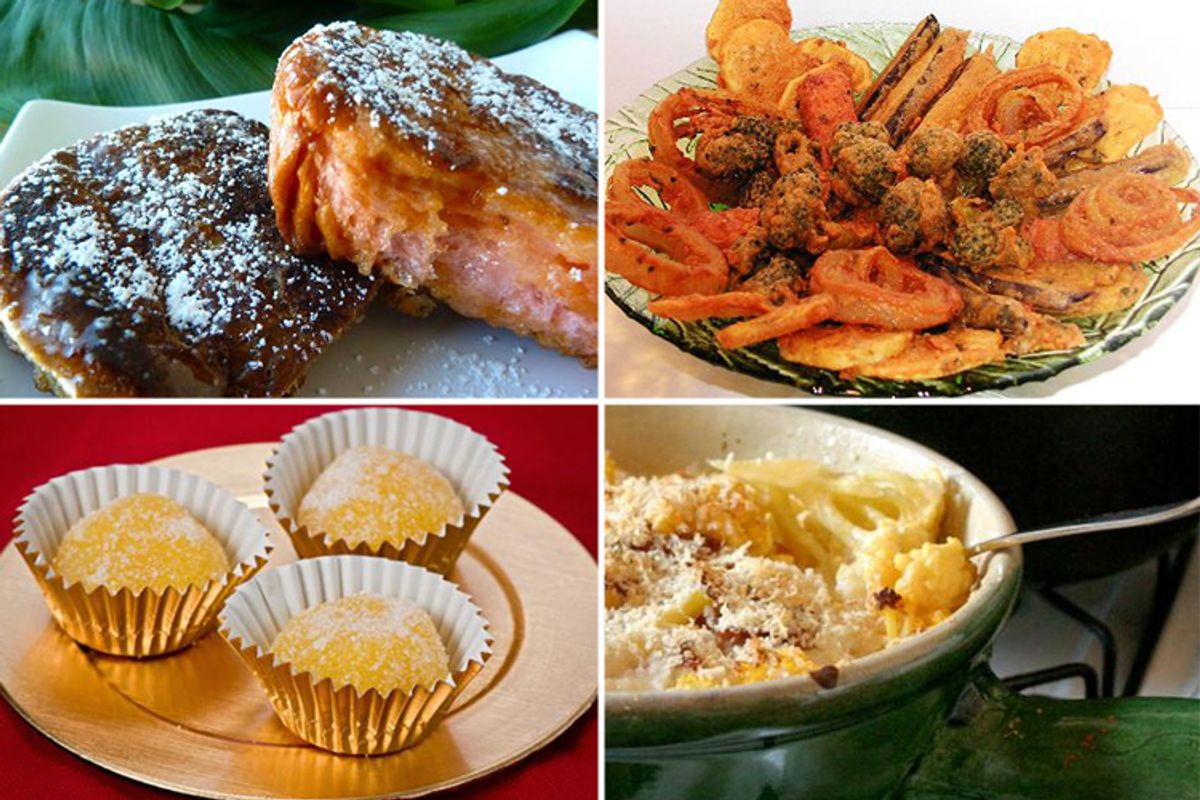 Every week, your challenge was to create an eye-opening dish within our capricious themes and parameters. Please note that by participating, you gave Salon permission to re-post your entry if it's chosen as a winner, and acknowledged that all words and images in your post are your own, unless explicitly stated. And yes, mashed potato sculpture counted as a dish. Emphatically.

This week, we asked for your least-guilty guilty pleasures.

Spaghetti alla carbonara by Charlie Lawton: Forget all the leaden, creamy, faker versions of this classic Roman dish. Here it is, in its original form: just good pasta, cured pork, eggs and cheese, food that will make you moan and then pass out.

Pakoras -- Indian vegetable fritters by Anjali Joshi: Light, crisp and beguilingly spiced, Anjali shares a favorite taste from her Delhi youth, when pakoras were about the only thing that could lure her back indoors at the start of the monsoon season.

Cauliflower and prosciutto gratin by Launie Kettler: What do you do when you find beautiful fresh cauliflower? Well, if you're a writer whose bio reads, "A native Vermonter who finds nature abhorrent," you might douse it in creamy cheese sauce with pork products and bake it all into brown, toasty, tasty submission.

Hawaiian sweet bread French toast with coconut syrup by Linda Shiue: For food lovers, no trip to Hawaii is complete without malasadas, local doughnuts by way of Portuguese immigrants. But coming home, where plain old doughnuts rule, Linda took inspiration from a conversation she had with a malasada maker to create her own sweet, bready treat.

Yemas de Santa Teresa (aka, more egg yolks than you can imagine) by Felicia Lee: A hilarious story of family, cholesterol, colonialism, cholesterol and traditional Spanish and Portuguese sweets that consist of, basically, sugared cholesterol.

PLUS, ALSO, TOO: THE HONORABLE MENTIONS

Chocolate cheesecake with caramel, ganache and almonds by Brandi Jo Plaster: What is left to say?

"Scrapolini" -- pasta with butter and crispy garlic by Rebecca Farwell: "Go from soggy-footed entry to comfy couch (TV remote in one hand, glass of red wine in the other) in about 15 minutes."

The accidental amazing carrot cake by Dawn E. Bell: What happens when a baker accidentally drops five cups of powdered sugar into a carrot cake batter? Well, apparently, an unbelievably caramelized crust and a flavor "like sugared spice." We are a little too worried about our insulin to attempt such a feat, but you might be braver!

Five-minute chocolate cake by Horns of a Dilemma: A classic of Internet recipe sharers, here it is, ladies and gents: "The Most Dangerous Recipe in the World," the chocolate cake that takes five minutes to make. (Not saying it's the best, but, hey: five minutes.)

AND NOW FOR ... an announcement

Cue the old-timey TV voice, because we've got something we have to say: This concludes our regularly scheduled SKC programming.

But before the waterworks start, we'd like to say something else, that that something is this: 68. That's how many Salon Kitchen Challenges there have been, how many weeks you have shared your stories, jokes, pictures, slices of life and -- of course -- recipes to the thousands of readers and fans of the challenge. We tip our hats to you, to those who gave it a shot once, and to those who have shared dozens and dozens of times. Your tireless writing and cooking and storytelling are amazing. Thank you so, so much for making this little contest so fun, enlightening, touching and delicious ... even though no one ever took us up on submitting mashed potato sculpture for their entry.

So we hope, even without the Salon Kitchen Challenge, you'll keep blogging on Open Salon, sharing with your many fans. They'll be there, reading, chatting and cooking.