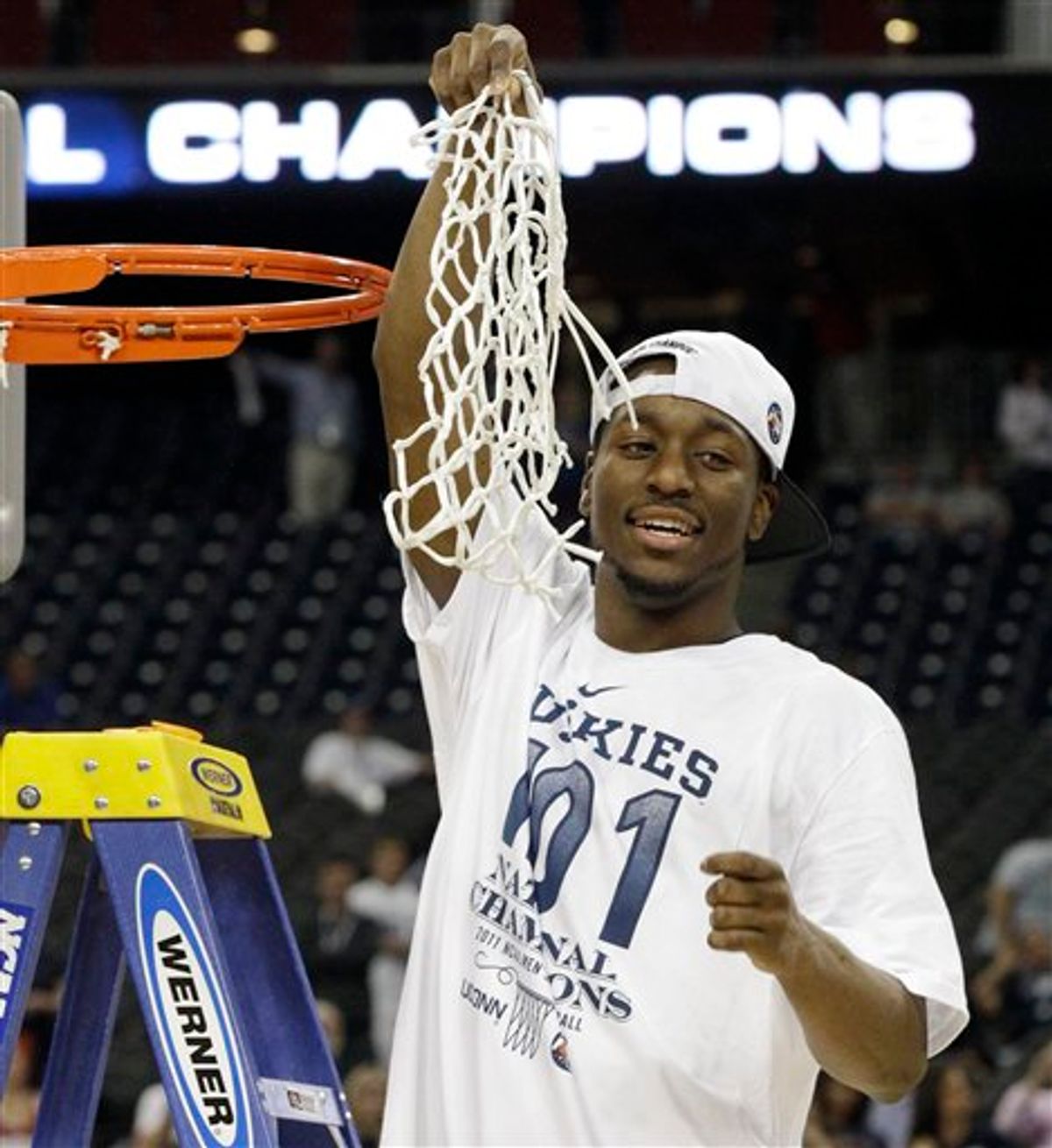 Connecticut's great second half in the national championship game started with some words in the locker room from coach Jim Calhoun.

"The halftime speech was rather interesting," said Calhoun, who has been known to use his loud voice and some salty language to get his point across to his team. "We knew we could really defend them. ... The major adjustment was we were going to out-will them and outwork them, and eventually we outplayed them."

The Huskies answered their coach's demands by holding Butler to 16.2 percent shooting in the second half of their 53-41 victory Monday night that made Calhoun just the fifth coach to win three national titles.

The Bulldogs shot a Final Four-record low 18.8 percent from the field (12 of 64). The 12 field goals were the second-fewest ever in a championship game.

"Sometimes shots don't go in, and that's basketball," Butler coach Brad Stevens said. "But I don't want to just say shots didn't go in, because UConn had a lot to do with it. ... Great teams give themselves a chance to win even when they're not shooting well, as UConn did."

Shelvin Mack hit a 3-pointer with less than a second to play in the first half to give the Bulldogs a 22-19 lead, and Chase Stigall hit a 3 just 22 seconds into the second half to put Butler up by six. After that, it was all UConn.

Butler managed five field goals the rest of the way.

The Huskies have always been defensive-minded under Calhoun, but this was above and beyond what anyone could expect.

Calhoun didn't just get his team going defensively with the halftime speech.

His teammates were knocking away Butler's shots. The Huskies finished with 10 blocked shots, four each by freshman Roscoe Smith and sophomore Alex Oriakhi.

"I thought they challenged shots better than any team we played all year," Stevens said.

Connecticut had been one of the best defensive teams in terms of field goal percentage over the past decade, leading the country in that statistic three times in the last seven years.

"We made some technical adjustments, switching some things we don't normally switch, to chase them off the 3-point line," Calhoun said, referring to Butler making five 3s in the first half. "And I ended (the halftime talk with) something my assistant told me, 'You're better than this.'

"I said, 'If you play faster on defense, we'll get faster on offense.' And quite frankly, it worked out like that."

Butler had two long stretches without a field goal in the second half. The first lasted 7:07 and the Bulldogs missed 13 shots during that span as Connecticut took a 33-26 lead.

The second lasted 6:09 and they missed nine shots in that one as the Huskies went ahead 41-28.

"They're a great defensive team," said Shelvin Mack, who led Butler with 13 points and was the Bulldogs' only double-figure scorer. "They're very athletic. They would contest shots that people normally wouldn't be able to contest."

Years from now people will see the final score and say it had to be a great defensive effort.

It was. For one team for one half after one heck of a halftime speech.