I can't believe my best friend is a Republican 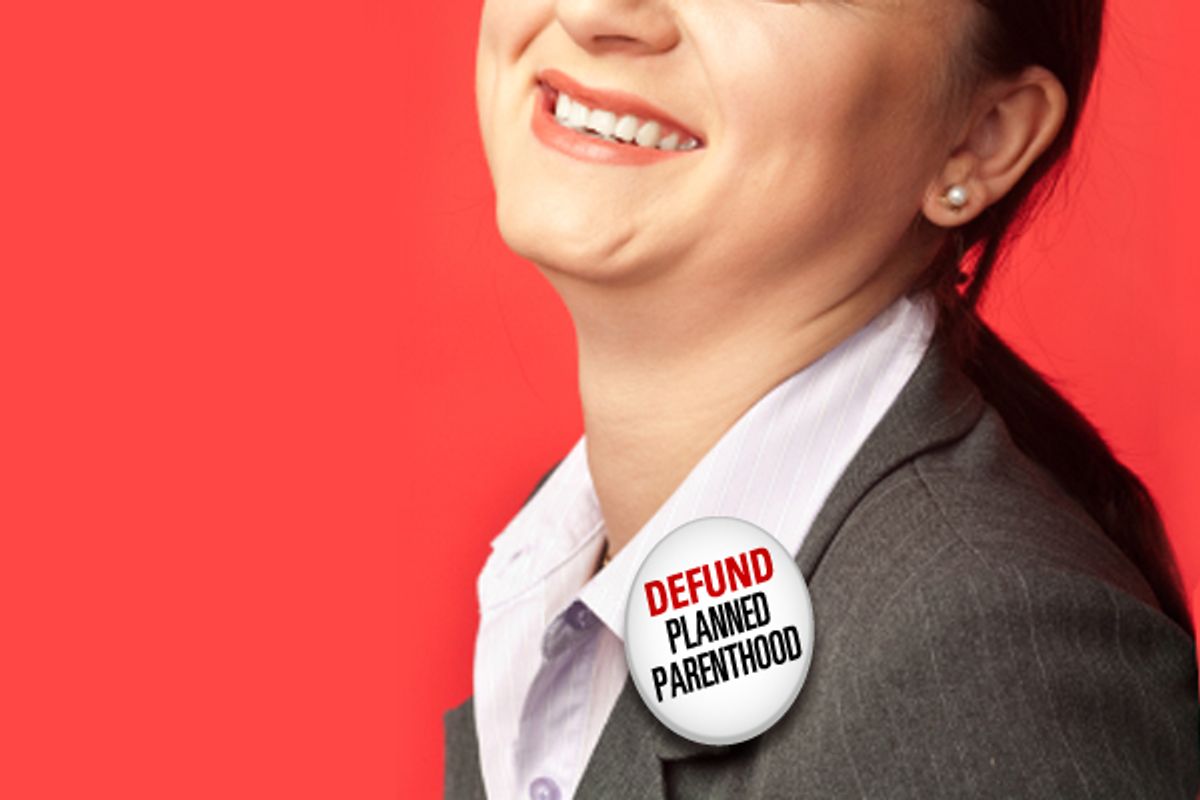 Janet and I would likely have never met, save for the thing that unites so many women across divides of income and age: fat. We met in a weight-loss group. There were six or seven of us in that group, but Janet and I were drawn toward each other. I liked her refusal to lie about what she'd eaten or rationalize it. She liked my tenacity and optimism. She handed me a business card that said her name, followed by "Ph.D., Housewife" and contact information. Clip art of an American flag appeared on the next line.

Beyond our weight-loss goals, we had little in common. She lives in Beverly Hills; I live in an area just beyond it where the potholes are reminiscent of Sarajevo and the government is broke. When we met, Janet was just closing up shop on reproduction, and I had just gotten married.

But for all the things we don't have in common -- and the papery, crumply things we do -- our main difference is our political affiliation. Janet is a lifelong, passionate Republican. She does not pretend she is just a fiscal Republican, or just a Republican for Israel, as so many in our Jewish community are. She is a real, live, voting Republican. She likes Fox News and Rush Limbaugh. She admires Sarah Palin. She is for the defunding of NPR and Planned Parenthood. She is against "Obamacare," and she is for parental notification of abortions. Right now on my Facebook page, I have linked to a New York Times article on how women's rights are being violated by South Dakota's new abortion laws. Janet has just posted on hers -- I'm not kidding -- video footage of her and her husband at target practice.

In the beginning, it didn't matter. We were more concerned with our own mutual war on body fat. And we soon found on the periphery of weight loss the other things we had in common: a love of books and science, a hatred of hysterics. After I gave birth to my son, so far from my own extended family, her children became a local version of cousins: They marveled at his every new word, they imitated his walk, they donated the books they aged out of. Our husbands began to socialize. Before we knew it, our families were, well, family.

Word got out that Janet and I were spending time together.

"You know she's a Republican, right?" whispered another member of our weight-loss group after I took her card. It was meant as, well, what, exactly? A warning?

Yes, I had known. Her daughters' names are Liberty, Honor and Victory, the latter named at the time we invaded Iraq. (Her son's name, inexplicably, is Bernard.) She owns a bust of Ronald Reagan and cried when he died, proving that she, perhaps alone with Nancy, had remembered that he was still alive. There is a bumper sticker on her very, very large SUV that says "REPEAL," and I believe it refers to the healthcare bill.

Janet and I refer to each other's political parties as "your people," but mostly, we try to stick to the things we have in common: budgets, schools, child-rearing. Janet wore a Tea Party shirt to my last birthday party, and my birthday present to myself was to not ask about it.

But it's hard not to talk about it at all. When you live, say, on a coast or in a very blue state, you grow accustomed to being surrounded by people who believe like you do. You get to thinking that the only people who would dare contradict you are ignoramuses. Meanwhile, I began directing all my anger toward the Republican Party at Janet. On the day that Congress voted to defund Planned Parenthood, I found myself furious at Janet, just Janet, as the face of all that was bad in the world. Feeling sad and deflated, I wandered over to her house, unable to look her in the eye, asking her why? How? To what end?

She told me she didn't believe government had any business funding it in the first place. That this isn't about abortion or hating women but ways the government doesn't need to be involved. She told me Planned Parenthood was well-funded and won't even miss the money. "Planned Parenthood will be better off without government funding and all the strings that are presumably attached," she said. "I sometimes wonder why liberals, who are so enamored of the freedom to do any damn thing they want, even take government money when it constricts their freedoms."

I closed my eyes and breathed through what she was saying. Janet isn't Glenn Beck or Sarah Palin. She believes what she's telling me, and she's studied the issues. That might be what is so difficult: She has the same education as I have, and yet she has made different decisions, decisions that are so counter to what I believe. Decisions I find abhorrent.

And yet, I think having a Republican friend is making me a better liberal. We need friends who differ from us. It's easy to watch Republican extremism and think, "Wow, they're crazy." But when someone is sitting face to face with us, when someone we admire and respect is telling us they believe differently, it is at this fine point that we find nuance, and we begin to understand exactly how we got to this point in history. We lose something critical when we surround ourselves with people who agree with us all the time. We lose out on the wisdom of seeing the other side.

When I moved to Los Angeles, the 2004 election had just finished ravaging the neighborhood. Friendships had ended over differences of opinions, a few marriages had learned what they were made of when one couldn't abide what hadn't been that big of a deal before 9/11. And so when I met Janet, she was on the defensive. That first dinner at her house, someone brought up her Republicanism. I looked down into my soup, sure this was something we shouldn't talk about. I don't remember the comment, or Janet's reply, but I remember my husband asking why she'd be friends with all these liberals -- and yes, it was only liberals at the table -- if she felt so strongly. Throwing her hands up, she said, "I guess I lack the courage of my convictions."

But it's not that. I don't speak for Janet, but I think there's something deeper at play. Janet's willingness to associate with so many liberal friends -- though I know she seeks refuge in chat rooms and magazines that share her beliefs -- makes her a better and more interesting person. She has her beliefs challenged constantly. She is more well-read and educated in her politics than most of the liberals I know. Too many liberals I know are lazy, they have a belief system that consists of making fun of Glenn Beck and watching "The Daily Show." Shouldn't their beliefs be challenged, too?

This is a democracy, after all. Isn't it worth understanding a bit more about why approximately half the country votes differently than we do? Isn't it important that we understand why people -- good and legitimate Americans, whose votes count as much as ours -- like Sarah Palin? Isn't it crucial we figure out why any woman would want to defund Planned Parenthood, if only so we could then address the argument? Nobody benefits from sitting in a room, agreeing with everyone else.

Last year, Janet sent me a gift subscription for the National Review. Maybe it was her way of trying, like I am here, to understand how we can be so different and yet the same. Maybe it was a wish, a kind of magical thinking, that if I knew what she knew, I would think how she thinks. It didn't work. In fact, I now often receive solicitations for causes and candidates I find objectionable. Every time I have to unsubscribe from something, tear up a brochure or tell someone on the telephone how disgusted I am with his or her mandate, I think again about how deep our differences run, mine and Janet's, and I wonder if this is all worth it.

Then I remember the things that don't get discussed in our debates -- how she held my hand through a recent surgical procedure, rubbing it and distracting me the way a mother would, how she calms my fears about parenting, how she has been a family to me in a town where I have none. How that right-wing, gun-loving, flag-wearing, union-busting Republican still thinks, after all this time, and with so much information to the contrary, that I can lose and keep off weight.