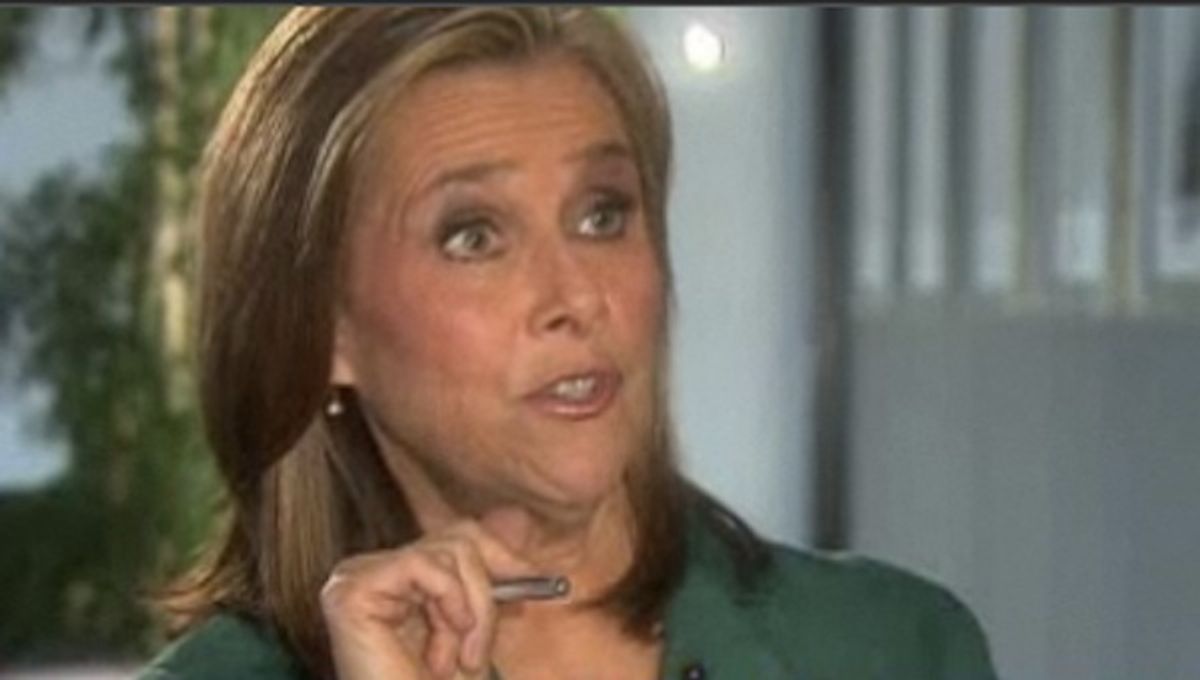 Donald Trump went on NBC's "Today" this morning to discuss his possible run for the presidency. It was bonkers. But even more bonkers was the stuff they didn't show you.

Meredith Vieira considered the fidgety man in front of her. His skin was the color of an oompa-loompa, and his hair ... there was something very unpleasant about this man's hair. Meredith looked at the "Today" show clock, and back at the man again. She was not looking forward to interviewing Donald Trump.

"I have to get out of this job," said Meredith to herself. She was planning to get through the next hour by imagining herself and Katie Couric (maybe Matt Lauer if they let him tag along) as they sat on a Caribbean island somewhere, getting drunk off of foreign drinks served to them in coconuts.

"Meredith!" said Donald Trump, snapping the TV host back to the harsh reality of the studio and the crazy man in front of her.

Donald looked confused. "What is what?"

"Why were you shouting my name?"

"EXCUSE ME, MEREDITH, I have had very smart people tell me Obama was not born in this country!"

Meredith closed her eyes, counted to 10, and then opened them again. "What?"

"I am a very smart man! People will vote for me for president because of common sense, and also because of my very popular TV show, which I will not leave to run for president."

"Donald, the cameras aren't even rolling right now," Meredith said, pointing to the abandoned posts of the operators.

Meredith didn't answer, but folded her hands in her lap and gave Donald her best "mom stare."

"I wish I didn't have to be president," said Donald Trump, looking sadly at his feet. "All I want to do is make more high-rise buildings in New York that no one can live in."

"No one says you have to be president, Donald," said Meredith, patting the real estate titan's hand.

He shook his head angrily. "No! The country needs me! There is too much reckless government spending going on, and I need to put a stop to it with my fiscal investments and sudden desire to build schools in places like New Orleans and Arkansas!"

"Have you ever been to New Orleans or Arkansas, Donald?" asked Meredith.

Meredith sighed, shuffling around some of her note cards. "Now, when you say that you -- a billionaire who builds buildings with no one in them and who has a TV show where you fire people all day -- identify with the Tea Party, are you talking about literally identifying with a group whose majority is made up of blue-collar, middle-class Americans from the red states? Or are you just using the Tea Party as a convenient excuse to make some kind of illogical argument that shutting down the government will somehow save these people money?"

"Both," said Donald, smiling and nodding his hair.

"Meredith, excuse me? If I can just talk for a second?"

"No one is interrupting you, Donald," said Meredith, starting to get nervous. Donald's left eye was twitching wildly. He opened his mouth, but the sounds that issued forth came from the top of Trump's head, which had begun to pulse and bulge. When it spoke, the noises issued forth in a hideous sucking sound, like an old man smacking his lips.

"THE GOVERNMENT MUST BE DESTROYED. ALL HAIL KING DONALD!"

Meredith stared in horror at the tendrils on top of Donald's hair, usually shellacked into place, now all waving madly in every direction as the man's eyes rolled back in his head.

"Donald, are you all right?" asked Meredith.

Meredith forced a grin on her face, knowing that she should say something, do something. Only she could save our planet from the aliens. But then she thought of that island on the Caribbean, and those rum-laced drinks with Katie Couric and maybe Matt Lauer. Meredith's face relaxed.