How do you parent the texting generation?

I don't even understand Facebook and cellphones. So how do I make fair rules for my kids? 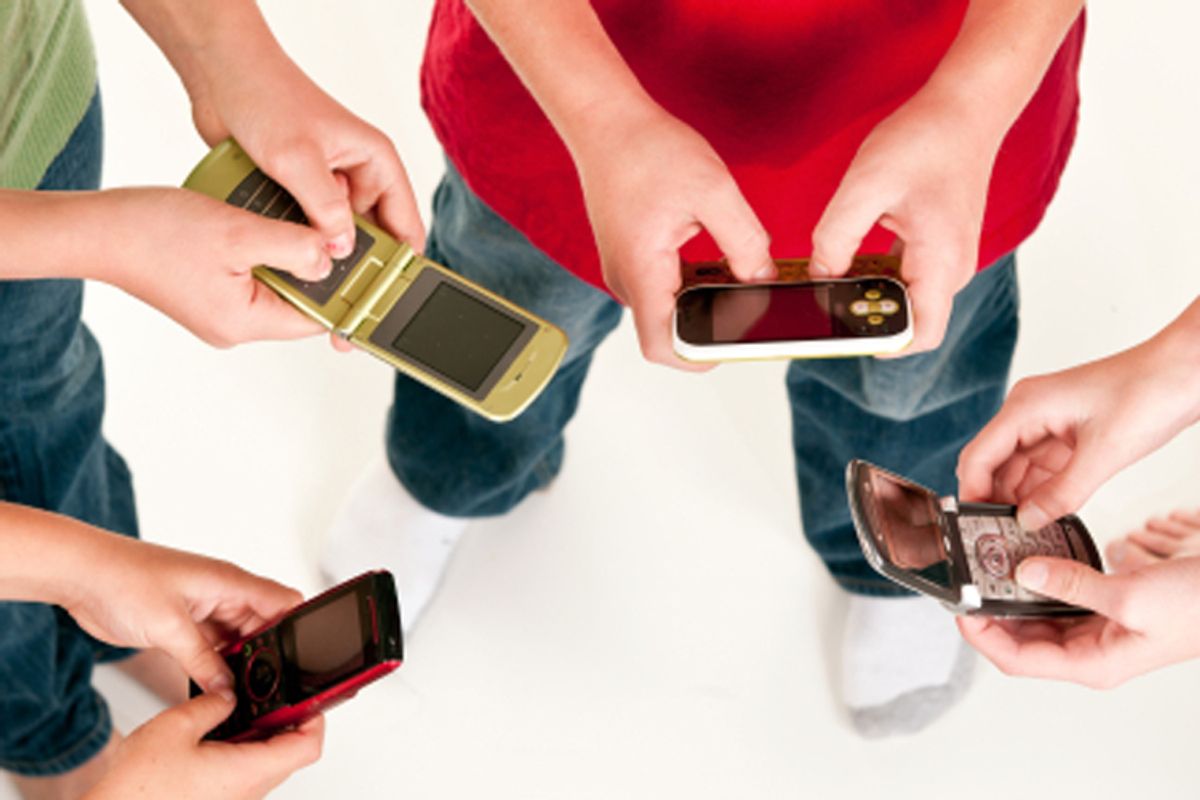 My oldest daughter, Sarah, now 22, received a cellphone when she turned 17 -- just five years ago. In that span of time all my kids (the youngest is 12) have had cellphones pressed into their palms and, I fear, their brains. I have little to say about this situation: Their father buys them and pays the plans. As a single mom parenting 26 days out of every month, I am left to deal not with bills but rules: recharge at night in the kitchen, no phone calls or texting during dinner, no texting when reading or watching anything with a storyline, and for the 12-year-old, no texting past 9 p.m. (bedtime) until you are older. Much older.

I give them rules of social etiquette, too. Don't text when you're mad. Don't keep and reread something someone said when they were mad. Don't become a gossip. Don't text with lowercase "i, ur, r, thru," or use numbers for words, because I am an English professor and I see all these cropping up in student papers.

I fear my children will develop AADD -- Acquired Attention Deficit Disorder -- and so I jabber on about politics, or a sunset I don't want them to miss, or puppies being born, all while they are listening to music on their phone, texting a friend and searching for something on the Net. This multitasking is not good for the brain, I say. I tell them, repeatedly, how our brains were wired to pick berries and hunt mammoths. They roll their eyes, and I feel like a fossil.

But am I even right? For the first time in two decades of parenting, I am consistently unsure if my rules and my expectations are fair. I go around and around, as unsure about my decisions as I am about the technology.

I am someone who looks for answers in books and so I read about the early finger waggers of the telephone. The alarmists pointed to invasion of privacy with "party lines," with nosy neighbors the omnipresent danger. People thought talking on the phone would be the end of social gatherings or would entice "young people" to dangers unseen by their parents. Finally, talking on the phone would lead, inextricably, to the death of writing.

And yet, it was also predicted the phone would help further democracy and cultivate grass-roots organizing, shrink the world to a point where all would have a voice and peace would reign, help emergency services, bring people closer together, decrease loneliness, liberate the shut-ins, have a real impact on speech patterns and introduce new words into not just the vernacular but the dictionary.

So I conclude, I am a fossil. But one who negotiates this new world of cellphones, Internet and applications with an eye to teaching my children about patience, the unrealistic expectations of people and technology, truthful communication and, finally, the perils of instant gratification. They bear with me.

I try to teach them good manners no matter the platform they're using. So when I pick up the youngest, I get out and talk to the parents face to face instead of sitting in the car and calling John on my own cellphone. I equate texting in the car or dinner table with whispering. When a red flag goes up, I don't see my casual question about whom they are texting or emailing as an invasion of privacy, but as thoughtful parenting. The tipping point, as with all parenting, is when to let go. I'm pretty good at that. But I am clearly not the cool parent. Often I am at odds with adolescents who, I am sure, sneak down occasionally to use their phone at night.

But there are moments of sweet calm, when I realize that this technology bonds them in ways I don't realize. The other evening, at dinner, my boy Travis casually mentioned he heard from his older sister Sarah at Brandeis. She delivered a paper in Sacramento and it had gone well. Cora and John talked about pictures Sarah sent over Facebook of her two California friends, friends they knew too, and she kept up with letters, email and phone calls. Then the three talked about music Cora downloaded for John on his phone and how much he owed her. All four were talking, communicating, sharing with each other and I was warm-fuzzy-happy to be out of the loop.

The world is smaller and faster these days. All I can do is try to help them navigate the joys and perils, to build these ephemeral connections with grace. Eventually, I have to trust them to do just that.