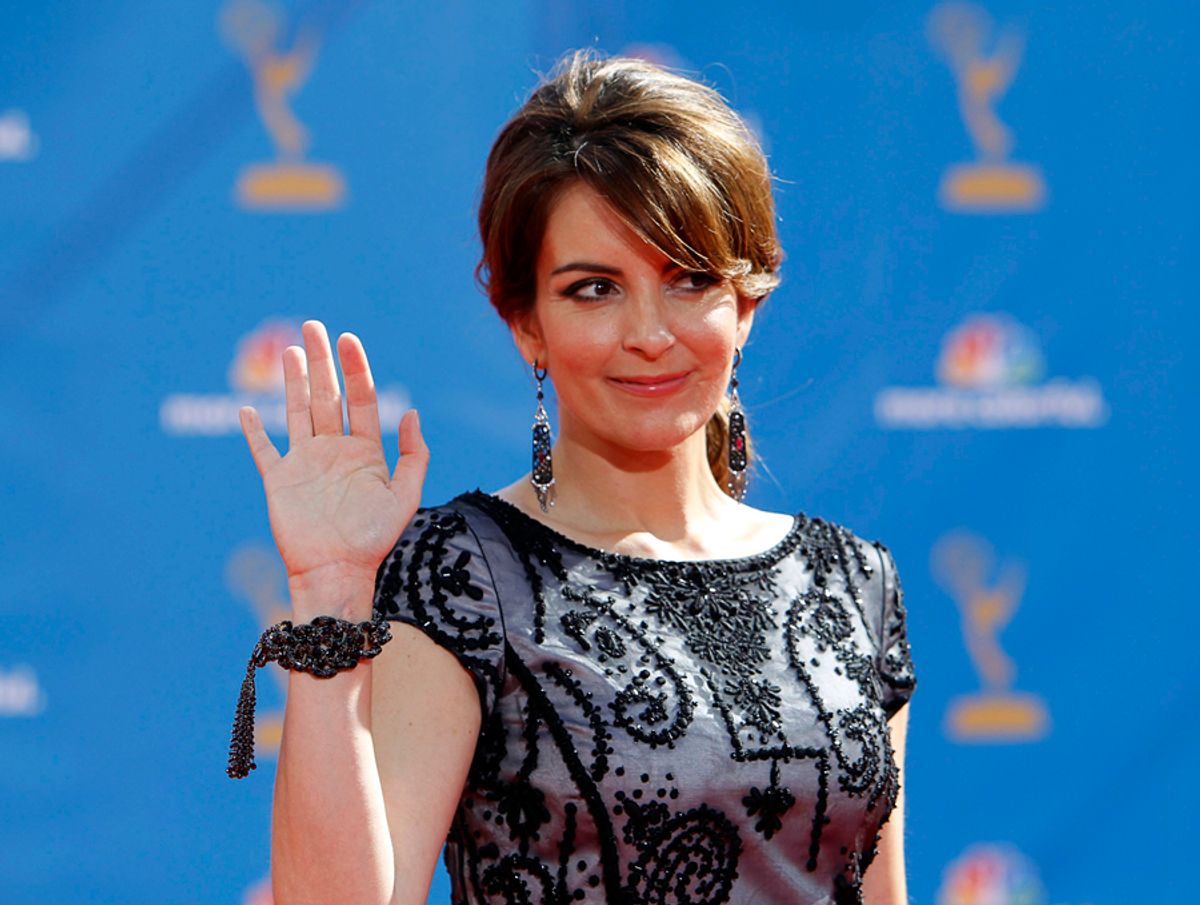 It all makes sense now! Just yesterday, we reported that Alec Baldwin had been out and about this week, bean-spilling about the demise of "30 Rock" after next season. And then I speculated about whether the creative team's desire to wrap things up might have anything to do with writer, producer and star Tina Fey's angsting over whether or not to have a second child. Turns out, that decision was made around the holidays, when Fey and her husband, "30 Rock" composer Jeff Richmond, got busy with some baby making.

On an episode of "Oprah" that Fey taped Tuesday and which airs next week, the 40-year-old revealed that she's five months pregnant. Her timing, which would have her baby arriving in August, appears nothing short of miraculously synchronized to the rigors of a prime-time network show. Her condition will barely be showing by the time "30 Rock" wraps up for the season later this spring. And Fey could, should she choose, return to Liz Lemon mode in time for the show's usual late September premiere. Sound impossible? Fey was back at work at "SNL" just six weeks after her daughter, Alice, was born in 2005.

While the public fascination with celebrities, mothers and celebrity mothers is as glaringly obvious as Mariah Carey's nude magazine covers, that idolatry usually comes with a heavy dose of romantic BS. For every fawning puff piece about a glowingly pregnant Kate Hudson or the back-to-bikini bods of Halle Berry and Heidi Klum, for every time Angelina Jolie gushes on about the wonders of motherhood, there are a million real working mothers who don't have stylists and trainers and personal assistants and nannies thinking, "You've got to be kidding me."

But Fey has, perhaps more than any other star, defiantly set herself outside the realm of the Queens of Having It All. In a passage from her new book, "Bossypants," excerpted this past winter in the New Yorker, Fey admitted being "stricken with guilt and panic" when her daughter expressed a longing for a little sister, and how, "tired of carrying this anxiety around," she "burst into tears" at the gynecologist's office. That's a real, anguished road a hell of a lot of women have been down -- the fear of losing career traction as fast as you're losing eggs, and not knowing what to do about either. That Fey can write about that pain -- and with humor and exasperated self-deprecation -- is a testament to her skill.

Sure, plenty of famous -- and not famous -- moms make it look easy. Whether they're Gwyneth Paltrow or your perfect, MBA-getting, Brownie troop-leading neighbor, they seem to sail through the rigors of career and parenthood with effortless grace, smiling as they do their humanitarian work in shirts unstained with tiny, peanut butter-greased hand prints. You know the type: They look like they've actually slept sometime in the last decade. Perhaps for them the "juggling" of which Fey has eloquently written comes as naturally as being a douche does for Glenn Beck. For many of us, however, even those for whom childbearing decisions do not mean "derailing the TV show where two hundred people depend on me for their income," it's not so easy. Many days, it's damn near impossible. As I was writing these very words, I had to field a call from the school nurse because a kid tried to open up some whupass on my 7-year-old at recess today. This is what "Having It All" looks like, world.

As Fey has written, "When you're single, you're like, 'Let's work 'til 10.' You don't care. Once you have a kid, you're like, 'Oh yeah, if I'm exhausted because my kid was up all night with a cold, so are 10 other people.'" Even before welcoming her second child, Fey is already no doubt feeling intense changes in her already intense life, because being a pregnant working mother is like tap-dancing while being chloroformed -- for nine freaking, heartburn-filled months.

Maybe that's why for Fey, whose work ethic could make James Franco look like a sleepy donkey, a little break sometime in the foreseeable future sounds like a hot idea. She's written, "What's so great about work anyway? Work won't visit you when you're old. Work won't drive you to get a mammogram and take you out after for soup ... Hollywood be damned. I'll just be unemployable and labeled crazy in five years anyway" -- a statement that would be more witty if it didn't have such a stinging ring of truth to it. And though she may crack jokes about the rigors of balance -- and "30 Rock" recently confronted the dilemma via the ambitious Devon Banks and his trio of "gaybies" -- it's clear from her dazzling success that Fey is not a woman who values her work any less because she loves her child so much. But the demands of being a powerhouse on all fronts can wear a lady down.

Fey seems to have, like the diligent good girl she so often plays, responsibly arranged her second pregnancy to cause the minimum amount of disruption to the people with whom she works. She has had to make concessions to the physical and emotional realities of working and parenting that no man ever does, especially those regarding the pressure of being in what Fey refers to as "the last five minutes" of opportunity. She is in the midst of a pregnancy seemingly timed to the whims of NBC.

It's tough balancing work and family at any age, but after a certain point, there's the danger of the choice being made for you, either by nature or your industry. To every woman who is passionate about her career, Fey's choice has been very clear -- and very familiar. So she'll take a break and have a baby. And then, heaven willing, she'll take a cue from her friend Amy Poehler and return to work. Because the world doesn't only need more successful, hilarious working mothers, just to prove it can be done. It needs more successful, hilarious working moms, just to get us through those long, brutal days when our kids get a fat lip on the playground.