Is "Your Highness" the worst film ever made? 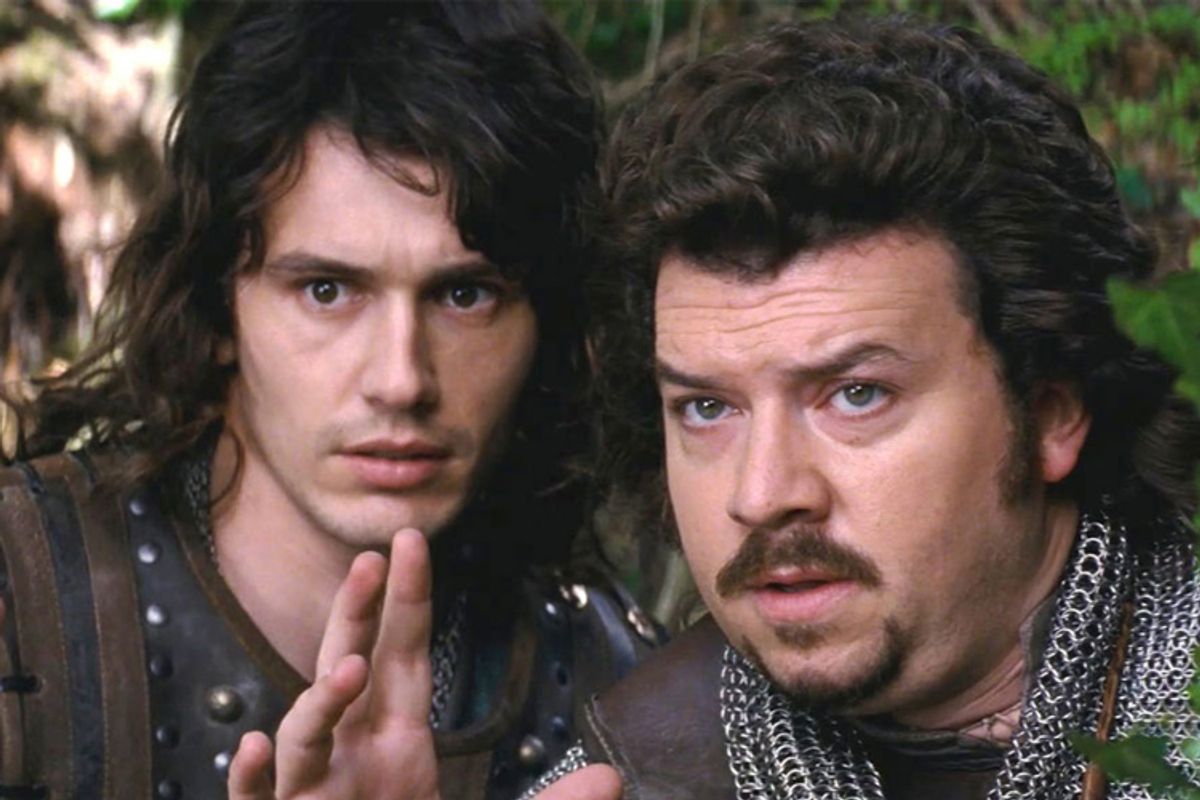 James Franco and Danny McBride in "Your Highness"
--

"Your Highness" must have seemed like a great idea at the outset -- and by "the outset," I mean the six baked minutes it took co-writer and star Danny McBride to scribble the basic concept on the back of an unpaid invoice from the swimming-pool guy. That basic concept appears to be "Cheech & Chong make 'The Princess Bride,'" or perhaps "Beavis and Butt-head meet 'Monty Python and the Holy Grail.'" Except, two things: Both of those concepts sound way funnier than this movie is in practice and, no, it shouldn't take six minutes to write that. I'm thinking there was a lot of giggling and high-fiving and talking in junior-high Shakespeare accents involved.

It's easy to say that McBride and James Franco and Natalie Portman and director David Gordon Green -- whose WTF career devolution, from "George Washington" and "All the Real Girls" to "Pineapple Express" to this atrocity seems destined to lead, sooner or later, to Budweiser commercials featuring women in white baby-doll lingerie -- had more fun making "Your Highness" than we have watching it. But let's face it, that describes 65 percent of all films made in Hollywood. Gingival surgery would be more fun than watching this brain-draining, spirit-sucking attempt at a stoner spoof, which combines the cutting edge of frat-boy wit, the excitement of a mid-'80s made-for-TV action flick and the authenticity of a Renaissance Faire held in an abandoned field behind a Courtyard by Marriott. A bus trip from Duluth to Sioux City would be more fun, and don't think I didn't do my research: That takes 13 hours and costs 96 bucks.

For a few hours after having seen "Your Highness," I considered the possibility that it was the worst movie ever made. The image of McBride as the dim, smug and beefy Prince Thadeous, who begins the story as an irritating lardass loser and ends it as an even more irritating hero, was burned into my brain, complete with the enormous severed minotaur dong he wears on a necklace. (Monster cock! ICWYDT!) And while I shouldn't feel bad for James Franco about much of anything (let alone the Newtonian backlash from all the media-fellatio he has enjoyed), his directionless, Keanu-lite performance as Thadeous' cooler and studlier brother, Fabious, only deepens the sense that his career has abruptly hurtled off a cliff into a bottomless abyss.

These two idiots wander about the countryside -- "Your Highness" was shot in Northern Ireland, so at least there's pretty scenery -- speaking in intentionally fakey Angoloid accents (sprinkled with wacky, occasional contemporary utterances, like "butthole" and "sweet!"), smoking some pipeweed they stole from Bag End, giving hand jobs to a Yoda-like alien pederast called the Wise Wizard (you can only wish I were kidding), lopping off the penises of would-be ass-rapist minotaurs and sporadically attempting to rescue Fabious' fiancée (Zooey Deschanel) from an evil wizard called Leezar (Justin Theroux), who plans to impregnate her with his foul seed. Oh, and Toby Jones plays a little, Iago-like elfin character called Julie. Who turns out to have no dick. Did I mention that there are a lot of dicks in this movie? Or that the people who made it are dicks? Or that I must be a dick, too, since I lacked the dignity and self-respect to walk out on this bloated, atrocious spectacle?

Now, in case you think I'm just being a humorless prig -- and I may be! I wouldn't be the person to ask! -- I do indeed get the point, to the extent there is one. McBride and co-writer Ben Best (they created the TV series "Eastbound & Down") don't take their movie seriously on any level. They inoculate themselves against all criticism, or try to, with an early-National Lampoon-meets-"Kentucky Fried Movie" level of intentional badness. If you're as old as I am, or somewhere close, you might remember the Tolkien parody "Bored of the Rings," and that's the general idea here (with all the smart and funny parts taken out). The minotaur's hacked-off love-hammer is supposed to gross us out; the accents are supposed to sound phony; Fabious and Thadeous are supposed to be buffoons. But that doesn't make "Your Highness" any better, and might make it worse. There's a special place in cinema hell for bad movies that were made semi-accidentally on purpose by talented people who ought to know better. If you're going to pre-Mystery Science Theater your own movie, and deprive the audience of the pleasure of mockery through your own insincerity, then don't come off like a bunch of self-indulgent dumbasses who squandered millions of dollars on something that is almost never funny. At least, that's my advice.

Almost a full day of near-sobriety later, "Your Highness" no longer looks like the worst movie in history (although it might make the top 1 percent). Given an awkward role as a chaste but ass-kicking female warrior (not to mention a painful-looking metal thong), Natalie Portman brings a distinctive touch of class to the proceedings. The mysteriously underutilized Justin Theroux is terrific in every scene as the evil wizard, and gets to say: "You are too late! The Fuckening has begun!" He has another funny line, which got the biggest laugh in this nearly laugh-less film, but out of some misguided sense of charity or ethics I won't give it away. As for Danny McBride ... uh, he seems like a cheerful fellow! It's not a criminal act, exactly, that he has dragged a once-promising director and several talented co-stars down the cannabis-scented rathole that is this epic, unwatchable disaster. I can only assume that his parents and friends and various other people genuinely enjoy his work as a writer and performer, and do not wish as fervently as I do that he would find some other occupation.