In a country still devastated from 2 earthquakes, an aftershock rippled through early this morning, causing damage

By Tomoko A. Hosaka - Jay Alabaster 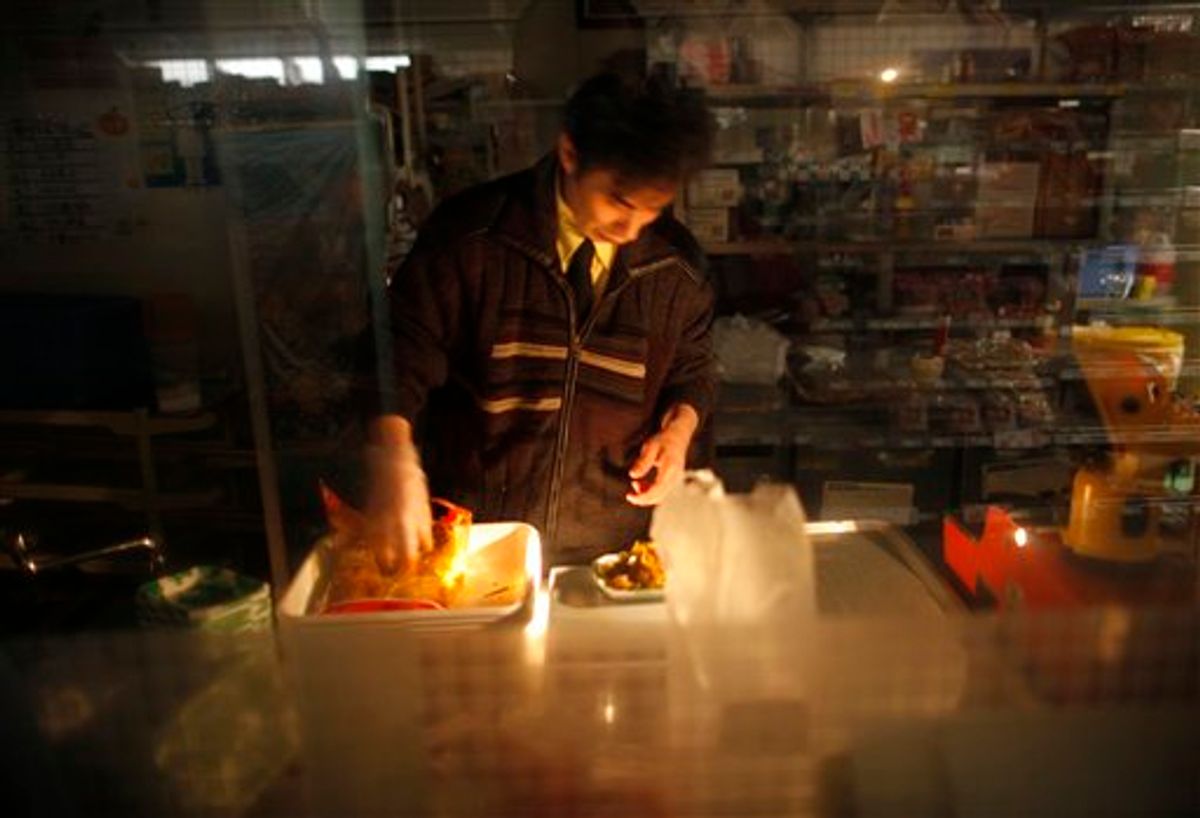 A staff of a supermarket prepares foods at the facilities with no electricity in Ishinomaki, Miyagi Prefecture, northern Japan Friday, April 8, 2011. A big aftershock rocked quake-weary Japan late Thursday, rattling nerves as it knocked out power to the northern part of the country and prompted tsunami warnings that were later canceled. (AP Photo/Vincent Yu) (AP)
--

A strong aftershock ripped through northeastern Japan, killing two people, knocking out power to vast areas Friday and piling misery on a region still buried under the rubble of last month's devastating tsunami.

The northeastern coast was still reeling from the destruction wrought by a jumbo 9.0-magnitude earthquake on March 11, with tens of thousands of households without power or water. The 7.1 tremor has now thrown even more areas into disarray and sent communities that had made some gains back to square one.

Gasoline that had become more available after weeks of shortages was scarce again, and long lines formed at stations. Stores that had restocked shelves sold out of basics Friday and were forced to ration purchases again.

Still, the latest quake did far less damage, generated no tsunami and largely spared the region's nuclear plants. Some slightly radioactive water spilled at one plant, but the tsunami-crippled Fukushima Dai-ichi complex reported no new problems.

Matsuko Ito, who has been living in a shelter in the small northeastern city of Natori since the tsunami, said there's no getting used to the terror of being awoken by shaking. She said she started screaming when the quake struck around 11:30 p.m.

"It's enough," the 64-year-old while smoking a cigarette outside. "Something has changed. The world feels strange now. Even the way the clouds move isn't right."

The latest tremor -- the strongest since the day of the tsunami -- sunk more homes into blackness, though power was quickly restored to many. About 950,000 households were still dark Friday evening, said Souta Nozu, a spokesman for Tohoku Electric Power Co., which serves northern Japan. That includes homes in prefectures in Japan's northwest that had been spared in the first quake.

Six conventional plants in the area were knocked out, though three have since come back online and the others should be up again within hours, Nozu said. But with power lines throughout the area damaged, it was not clear whether normal operations would be restored, he said.

In Ichinoseki, lines formed outside a supermarket when it opened Friday morning. An employee with a flashlight escorted each customer around the store and jotted the price of each selected item in a pad.

Most businesses were closed in the city, 240 miles (390 kilometers) northeast of Tokyo. One restaurant owner, Suzuki Koya, bought a small gas stove and made free meals in big boiling pot.

"I saw the meat at the supermarket and I thought, 'We should do a hot pot,'" the 47-year-old said. "It's good to keep warm in times like these."

Several nuclear power plants briefly switched to diesel generators but were reconnected to the grid by Friday afternoon. One plant north of Sendai briefly lost the ability to cool its spent fuel pools, but quickly got it back.

At a plant in Onagawa, some radioactive water splashed out of the pools but did not leave a containment building, Tohoku Electric said. Such splash-out is "not unusual, although it is preferable that it doesn't happen," according to Japanese nuclear safety agency official Tomoho Yamada.

"Closer inspection could find more problems," said agency spokesman Hidehiko Nishiyama, but no radiation was released into the environment at Onagawa.

The plant began leaking oil into the ocean in the first earthquake, and the flow escaped a containment boom in Thursday's tremor but was contained again by Friday, coast guard spokesman Hideaki Takase said.

Thursday's quake prompted a tsunami warning of its own, but it was later canceled. Two people were killed, national fire and disaster agency spokesman Junichi Sawada reported Friday. A 79-year-old man died of shock and a woman in her 60s was killed when power was cut to her oxygen tank. More than 130 people were injured, according to the national police agency.

That pales in comparison to the original quake and tsunami, in which more than 25,000 people are believed to have died.

Many of those bodies have still not been found: A significant portion were likely washed out to sea and never will be, but some are buried in areas that have been largely off-limits to search teams.

As radiation spilling from the troubled Fukushima Dai-ichi plant has fallen in recent days, however, police have fanned out inside a no-go zone near the complex to dig for the dead.

On Friday, hundreds of police, many mobilized from Tokyo, used their hands or small shovels, pulling four bodies in an hour from one small area in the city of Minami Soma. The had found only five bodies the previous day.

The searchers, wearing white radiation gear and blue gloves, struggled to bring the remains across the rubble to vans and minibuses that would take them to the nearest morgue. Each body was carefully hosed off to rid it of radiation before being placed in the vehicles.

"The area is literally a mountain of debris. It is an extremely difficult task," said an official with police in Fukushima prefecture who declined to be named because he was not authorized to talk to the media.

The epicenter of Thursday's temblor was in about the same location as the original 9.0-magnitude tremor, off the eastern coast and about 40 miles (65 kilometers) from Sendai, an industrial city on the eastern coast, according to the U.S. Geological Survey. It was strong enough to shake buildings for about a minute as far away as Tokyo, about 200 miles (330 kilometers) away.

At a Toyota dealership in Sendai, most of a two-story show window was shattered, and thick shards of glass were heaped in front of the building. Police directed cars through intersections throughout the city on Friday because traffic lights were out. Small electrical fires were reported.

At the Fukushima Dai-ichi plant, where nuclear workers have been toiling to plug radiation leaks and restore cooling systems ruined in the March 11 quake and tsunami, workers briefly retreated to a shelter and suffered no injuries. The plant operator said the tremor caused no new problems there.

Despite the new aftershock, automakers announced Friday that they were beginning to bounce back from the March monster. Toyota will resume car production at all its plants in Japan at half capacity from April 18 to 27.

The world's No. 1 automaker said it remained unclear when it would return to full production in Japan.

Nissan also said it would start up domestic production at half capacity from April 11.

Operations had been halted at both companies because of part shortages.