Making empanadas from scratch and memory

When my kids' caregiver moved away, she left a dear friend. But we celebrate each other every year by cooking 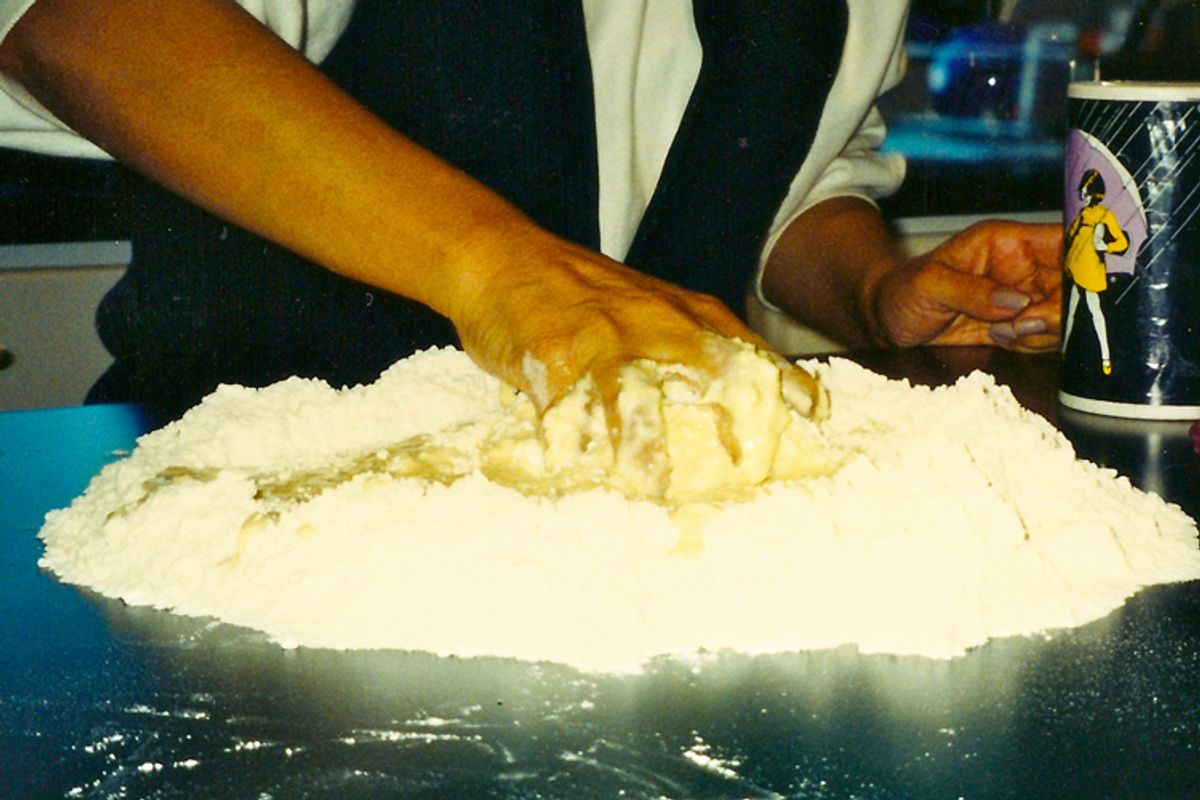 "I'll make the dough this year," I tell Nelly on the phone. I'm determined, though my talents flourish nowhere near the kitchen.

"I like Nelly's empanadas," my daughter Olivia says when I hang up.

In the morning we will drive two hours to Nelly's house for Empanada Day, a self-declared holiday we've been celebrating the Sunday before Thanksgiving for 12 years.

"Nelly always does everything. It's time I took a turn," I say, unsure about tampering with our tradition, but Nelly had a hard year, suffering with health issues, and I wanted to do this for her.

I start the dough making immediately. "Get the scrapbooks," I tell Olivia. Flipping through pages of Empanada Days over the years, I look at the pictures of the girls smushing balls of dough in their highchairs. The note, scribbled beneath the step-by-step photos, says: about half a cup of shortening for every three or four cups of flour. I have no idea how much water to use, so I try to guess at the recipe that lives in Nelly's heart, not a scrapbook. "We can do this, girls."

Nelly and I met more than a decade ago; she was the first and last person to come into my kitchen when I interviewed for caregivers. Back to work, I was in need of childcare for Olivia and Sophia, now 12 and 13, then just babies. Nelly lived with us during the week; a few years after she came I had my son Johnny -- Juanito as Nelly called him.

Johnny hung on my hip the morning I told Nelly I was getting divorced. I'd been up all night and the tears dropped into my cold coffee. Nelly, herself a single mother of three grown children, helped us through the custody battle, that excruciating year. Six years have passed since Nelly lived with us, and in that time Sophia and Olivia have been bridesmaids in Nelly's daughter's wedding, and I'm aunt to Nelly's grandchildren. Even though we no longer share our day-to-days, Nelly is still our Nelly, and Empanada Day still stands.

One morning, after Nelly had been with us for a year, she came into the kitchen, put on her red apron, and set out three pounds of London broil. "I make empanadas today," she said, and began dicing the meat. "It take time," she said, adding the onions. Hours later, she brought Sophia and Olivia in, and they became a part of Nelly’s handiwork, folding and kneading small balls of the dough while seated in their highchairs. Nelly made more than a hundred empanadas that day; we took platefuls to each house in our neighborhood. We agreed thereafter to make them together once a year. I have few traditions or recipes passed down from my family, so I loved borrowing from Nelly and her Bolivian roots.

I scoop cups of flour into a mound on the counter. I make a well in the center, volcano style, just like in the old photo I use for guidance. "Is this right?" I ask as Olivia cracks eggs into the well. Sophia adds the shortening, I guess at the amount of water and attempt to knead the mixture into a ball. The dough is the size of a football, and it's way off -- mucky, sticky. I add more flour and the powder falls on the floor in fistfuls. I panic, add more flour, the ball grows. "You should have let Nelly do it," the girls say, laughing now.

On the drive to Nelly's house the next morning, I pull over and the girls and I run into the Stop 'N Shop looking for the Goya aisle. I put the premade empanada dough in the cart. I'm stoic at the checkout line; the girls know not to say anything.

When we enter Nelly's house, I blurt, "Mine didn't work!" and pass her the plastic grocery bag with the store-bought stuff. She talks us into the kitchen of her tiny apartment with kisses. It's as if Nelly expected this. "Come, my moneka," she says to Sophia and Olivia and maybe me, too, her little dolls. "No importa. I do it," she says, pulling the canister of flour from the cabinet. She is small, the same height as Sophia, her black hair cut into a bob at her chin, her dark skin smooth as a wine bottle.

Nelly is quick with her movements from sink to counter; she once again works too fast for me to transfer her spontaneous measurements to my head. She gives Olivia and Sophia each a rolling pin.

Nelly made the filling last night, a detailed mixture that includes meat with olives, hard-boiled egg and potatoes, all diced to the size of green peas. The girls and Nelly put a spoonful of meat in the center of each circle of dough, and set to work folding them into crescents, crimping the rounded side by hand, so the meat won't ooze when Nelly fries the thin pouches. I have to crimp with a fork. I can't pinch the edges the way they do.

As Nelly's hands seal the dough, I think of her in the kitchen of my old house, making arroz con pollo, the girls playing with letter magnets, sticking them on the fridge. I remember those long days coming home from work late, running upstairs to see the children, bathed and smelling of baby powder, curled up on Nelly's bed, watching Spanish soap operas. I remember the nights when Sophia was learning to read, and Nelly practiced her English alongside her. All those Frog and Toad books.

The kitchen smells of cumin and olives as Nelly fries the empanadas. She removes each pouch with a slotted spoon and places the crispy crowns on a paper towel.

I sip coffee, watching Nelly and Sophia and Olivia work. Maybe it's just as well I wasn't able to make the dough; the pleasure of seeing Nelly with my daughters, her hands over their hands as they roll, makes me as happy as I have ever been. And I know it will be my girls, not me, who will make the dough in the future, when Nelly and I are old, and we all gather for Empanada Day.

Filling (Prepare filling the day before)